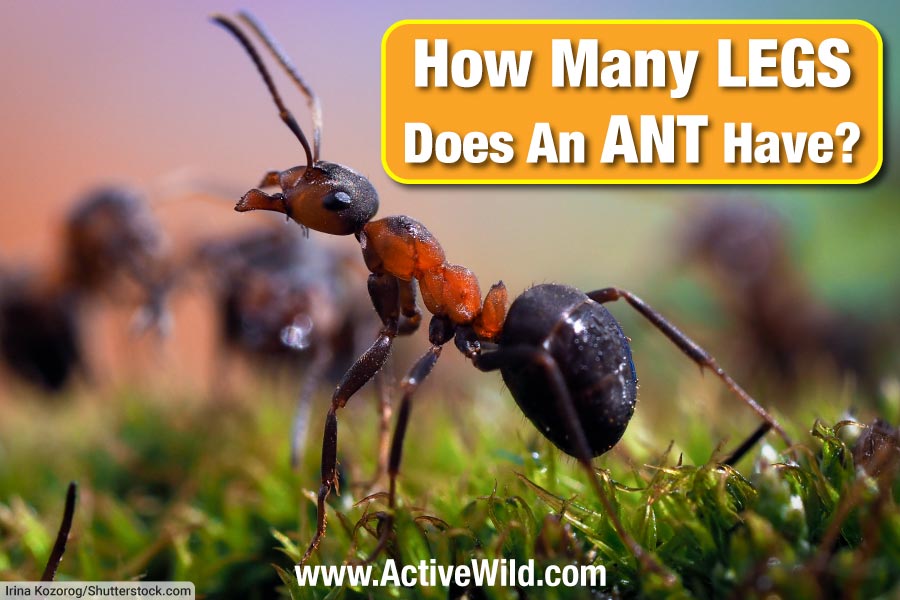 How Many Legs Does An Ant Have?

An ant, like all insects, has six legs. This is the same for all ant species, from the common black ant to the fearsome bullet ant. Whether an ant is a worker, a queen, or a drone, it will have six legs, all of which are attached to the thorax, the middle section of an ant’s three-part body.

On this page, you’ll find out more about an ant’s body; the different types of ant (queen, worker, and drone) and their roles in a colony; the ant life cycle; and meet interesting ant species, including the aforementioned bullet ant.

How Many Sections Does An Ant’s Body Have?

Like all insects, the body of the ant is divided into three main sections: head, thorax and abdomen. The whole body is covered by a tough exoskeleton, which is waterproof and provides the ant with protection.

How Many Eyes Does An Ant Have?

The head is where an ant’s main sensing organs are found. In most ants, these consist of a pair of antennae, a pair of large compound eyes, and three small simple eyes.

An ant’s compound eyes are made up of thousands of individual lenses. Although good at detecting movement, compound eyes can only produce a blurry image.

An ant also has three ocelli, or simple eyes, on the top of its head, which detect only light and shadow.

Ant vision varies between species. Ants that use their vision to hunt prey have large eyes and can make out shapes relatively well; those that live in the dark have much smaller eyes, with some being completely blind.

An ant uses its antennae to touch, taste, and smell things that it comes across. This helps the ant to find food, recognize its nest mates, and identify enemies.

What Is An Ant’s Thorax?

The middle section of an ant’s body is called the thorax. It is packed full of muscles that help power the ant’s three pairs of legs. These legs are designed for running, which ants are especially good at for their size. On the end of each leg is a hooked claw that helps them to climb.

What Is An Ant’s Abdomen?

The abdomen contains the ant’s heart, digestive system, and other vital organs. Some ants have a sting, and this chemical weaponry is also kept here. This is either used to inject enemies with venom or to spray acid, either as defence or to stun prey.

In between the thorax and the abdomen is a body part called the petiole, which is only found in ants and their close relatives, bees and wasps. The petiole makes the ant flexible, allowing it to bend forwards to sting or spray.

Ant Queen vs Worker vs Drone

Ant colonies have strict hierarchies and are led by a single queen. The queen is much larger than other ants and spends most of her life inside the nest laying eggs. A queen ant starts life with wings, but sheds them after mating. The now-superfluous wing muscles become a source of nutrition for the queen while developing the new colony.

The ants most commonly seen outside the nest are known as worker ants. These are wingless, sterile (unable to reproduce) females who take on a range of jobs to keep the colony functioning. Within this group, there are major and minor workers – minor workers are smaller and are responsible for general labor such as gathering food, cleaning the nest, and looking after the young. Major workers are larger and have powerful mandibles, or jaws. Their job is to guard and defend the colony.

The final group of ants is the drones; these winged, male ants have only have one job – to mate with a queen. Drones only live for a week, dying soon after mating.

During their life, ants undergo a complete transformation through four different stages. They begin life as tiny eggs, about the size of a full stop at the end of a sentence. But not all eggs will make it to adulthood, as some are eaten by other ants in the colony for extra nourishment.

Ants hatch from their eggs as a larvae with no legs or eyes. During this stage, they are completely reliant on adults for food to help them grow. Larvae grow very rapidly and when they are large enough, they transform into a pupa.

The pupa is a resting stage, during which the ant changes into its adult form, their legs and antennae folded against their bodies. Many ant species spin a cocoon for protection, but others remain exposed whilst the body metamorphosizes.

The whole cycle can take anywhere from a few weeks to a couple of months, depending on the species. When the adult emerges, it will either be a queen, worker, or drone. New workers will stay and maintain the colony, but new queens and drones will fly away to begin colonies of their own.

Weaver ants can be found living in trees and get their name from their unique nest-building behavior. Workers construct nests by weaving leaves together with larval silk. Colonies containing over half a million workers can construct hundreds of nests and span several trees.

Weaver ants are highly cooperative, working together to construct their nests. When a single ant cannot reach a particular leaf, workers will form chains with their bodies in order to reach it. By working together, they can build a large nest in under 24 hours. New nests are continually being built by workers to replace old or damaged ones.

The black garden ant is familiar to many as it lives in gardens throughout Europe and in parts of North America, nesting in soil, under paving stones, and between brickwork. In the summer, winged adults leave the nest and swarm in large numbers to mate before leaving to form new colonies.

The black garden ant has a varied diet but can often appear indoors looking for sugary food. The species also farms aphids for their honeydew, which is eaten by the ants.

Leafcutter ants are a group of 47 ant species characterized by their leaf-collecting behavior and ability to carry heavy weight. They live in forests in Central and South America, constructing large, underground nests in which they farm fungus to eat.

Leafcutter ants can carry up to twenty times their own body weight, harvesting vegetation and bringing it back to the nest. They then inject it with a fungal secretion that breaks down the plants and, over time, creates a nutritious mushroom farm.

The bullet ant lives in the tropical rainforests of Central and South America. It is famous for its extremely painful sting, and has the highest ranking on the Schmidt’s pain index – a scale that rates the potency of insect stings.

It is said that being stung by a bullet ant resembles being shot (hence the insect’s name). Although incredibly painful, the sting is not lethal to humans.

Bullet ants live in large colonies, which can be a target for predators looking for an easy meal. The ants use their powerful sting to defend themselves and their nest.

Carpenter ants can be found in forests in many parts of the world, nesting inside wood that they hollow out by chewing it with their mandibles. The insects play a crucial role in forest decomposition, returning nutrients to the soil and enriching it, but they can also infest wooden buildings and cause structural damage.

There are over 200 army ant species. Army ants form aggressive predatory foraging groups known as “raids”. These groups can eat over 500,000 animals every day, sometimes having devastating effects on prey populations. The ants’ prey includes other insects and their larvae, earthworms, and sometimes frogs, lizards, birds, and turtle eggs.

While foraging, army ants disturb insects hiding in leaf litter, exposing them to other predators. Some bird species are now attracted by army ant swarms, relying on them to find food.

You can find out more about insects on this page: Insects – The Ultimate Guide

Discover more about the animal kingdom on this page: Animals