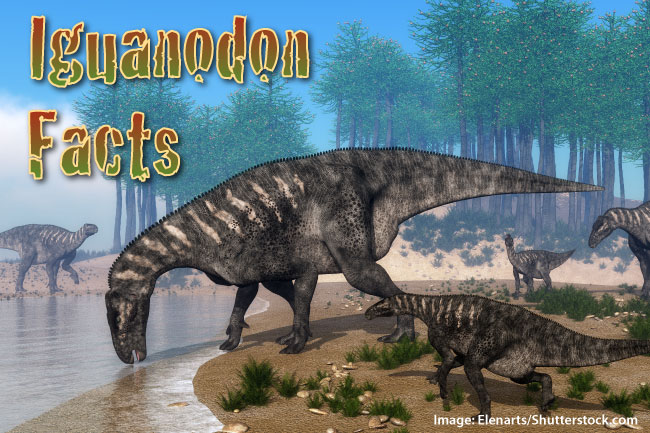 Iguanodon was a large herbivorous dinosaur that lived in the early Cretaceous period. Early dinosaur experts believed that Iguanodon had a spike on its nose. Later discoveries have revealed that the spikes belonged on the thumbs, giving the Iguanodon a useful tool … or perhaps a fearsome weapon. This article contains Iguanodon facts for kids and adults, and is part of our Dinosaur Facts Series.

Iguanodon was a large dinosaur, with an average weight of just over 3 metric tonnes (3.3 tons) – around the same as two mid-sized family cars. It was around 10 meters (33 ft.) in length. That’s well over the length of five tall men, lying head to toe.

Iguanodon had a large, narrow head and a hard, bony beak. This would have been ideal for tearing vegetation from trees and bushes.

Iguanodon was a bulky animal, with powerful hind legs, and shorter forelimbs. Each of its large hind feet had three toes.

At the end of each forelimb was a hand with four fingers and an additional spiked thumb. Three of the fingers were strong enough to carry the animal’s weight, allowing Iguanodon to walk on all four legs.

The image below shows the fossilized hand of an Iguanodon. The thumb spike is clearly visible.

As we’ve seen, early dinosaur experts thought that Iguanodon had a spike on its nose. We now know that the spike was located on Iguanodon’s thumb.

Iguanodon’s thumb spike may either have been used as a defensive weapon against predators, or for fighting with other Iguanodons – perhaps to establish dominance or to impress females.

Alternatively, the spike may simply have been a tool for holding or breaking apart food.

The fifth finger was also used to manipulate objects or food.

Iguanodon was discovered in 1822. Because it was one of the earliest dinosaur discoveries, our idea of what it looked like has changed dramatically over the years.

Did Iguanodon Walk On Four Legs, Or Two? 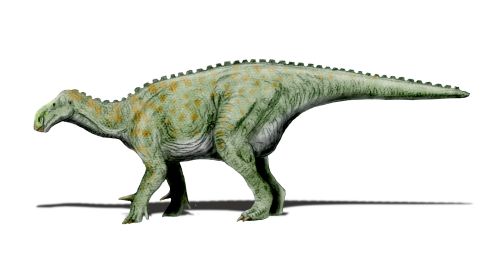 For much of the time, for instance when it was browsing on plants, Iguanodon would have walked on four legs. However, if it needed to run – perhaps to escape from a predator – then it would use just its longer hind legs to move at greater speed.

Although not built for speed, Iguanodon would have been able to reach speeds of around 24 km/h (15 mph) when running bipedally (on two legs).

Iguanodon’s tail would have been held out straight behind the animal, and its whole body would have had a horizontal posture.

Iguanodon used its hard beak to cut food, which it then moved further back into its mouth with its powerful tongue. Here, rows of tightly-packed teeth would have been used to chew the tough vegetation.

Dinosaur jaws can only move up and down, which meant that most dinosaurs simply cut off their food and gulped it down.

Iguanodons and similar dinosaurs may have gained an advantage over other dinosaurs by being able to chew their food. They could do this because they had a flexible top jaw, which bent outwards as the lower jaw pressed into it. This caused the food to be ground up in between the top and bottom rows of teeth.

Iguanodons probably fed on many of the horsetails (grass-like plants that reproduce with spores), cycads (evergreen seed plants) and conifers that existed in the early Cretaceous period. They may also have grazed on flowering plants, which had only recently appeared.

Where Was Iguanodon Found?

Iguanodon was discovered in 1820 by Dr Gideon Mantell, a medical doctor, geologist and paleontologist. He came across the fossilized tooth of an Iguanodon that had been found in a quarry near Cuckfield, in West Sussex, England. Mantell then found other fossilized bones in the same area.

He identified the tooth as being reptilian, and thought that it resembled an iguana’s tooth, only larger. He therefore named the animal Iguanodon, which means ‘Iguana tooth’.

It was only the second animal of this type to be named – and it would be several years before scientists realized that they were members of a previously unknown group of animals called ‘dinosaurs’.

Mantell later examined another Iguanodon specimen that had been found nearby in Maidstone, Kent.

(Recently, scientists have decided that the Maidstone specimen is not actually an Iguanodon, and gave it the name Mantellisaurus, after the paleontologist.)

Mantell argued with Richard Owen, another dinosaur expert of the time, over what Iguanodon looked like. Owen’s idea was that Iguanodon had four, stout legs. This formed the basis for the Iguanodon statue that appeared as part of the famous Crystal Palace dinosaur sculpture display, which still stands today.

In 1878, more Iguanodon fossils were discovered in a coal mine in Bernissart, Belgium.

Over 38 Iguanodon specimens were discovered here, along with several other prehistoric animals and plants. Over 130 tonnes of fossils were removed from the mine in an operation that took several years.

Because so many specimens were found in the same place, it has been suggested that Iguanodon was a herding animal. However, other studies, which show that the Iguanodons specimens may have come from different times, disprove this.