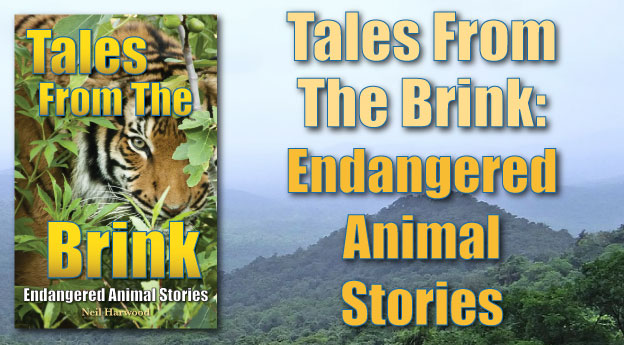 ‘Tales From The Brink: Endangered Animal Stories‘ is a collection of four exciting stories about endangered animals.

Written for young animal lovers, Tales From The Brink weaves information about the lives of the animals and the threats that they face into exciting, memorable storylines.

Learn more about the animals as you share their adventures. Get your copy today!


Available in paperback from Amazon.com and Amazon.co.uk

Tales From The Brink Stories: Join The Adventure…

In ‘The Heart Of The Forest’, Budi, a young Sumatran orangutan, has a strange feeling that something bad is coming to his rainforest home.

Leaving his friends, Budi ventures deeper into the forest than he’s ever been before, on a quest to find a new place for the orangutans to live.

During the course of his journey he meets many other rainforest animals … not all of whom are friendly.

Will Budi succeed in his mission? What will be waiting for him if and when he finally returns home?

‘Mother And Son’, tells the story of Darpan, a brave but reckless Bengal tiger. No longer a cub, Darpan is eager to prove himself to his fearsome parents.

One night, the tigers encounter strange, talking apes deep in the jungle. The apes don’t seem dangerous, and the tigers are hungry… should they obey their instincts?

In ‘Kabir The Hero’, a thoughtful young Indian elephant is on the brink of adulthood. Can he summon up the courage he needs to overcome a bully and help find a missing baby elephant…

… and what is waiting for him in the deadly moonlit forest?

‘Search For A Sister’ tells the story of Carrie, a leatherback turtle who travels thousands of miles on an epic migration.

On the journey from the warm Florida coast to the frozen Arctic north, Carrie becomes parted from her sister.

Will the two ever see one another again?

Buy now from Amazon, in paperback and on Kindle: