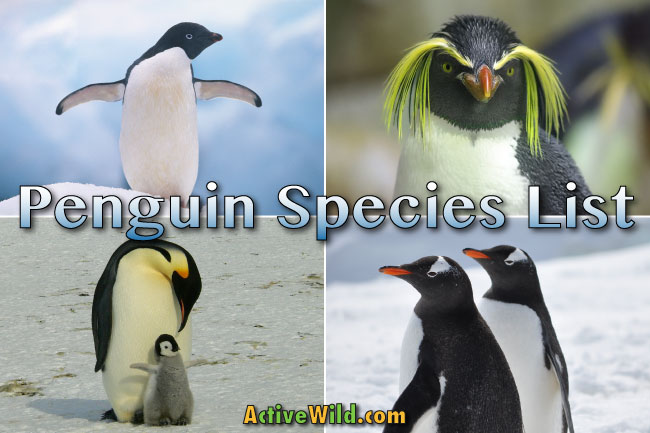 Penguins: types, identification, where found & conservation status. List of all types of penguins with pictures and facts.

In the list below we’ve included the 19 penguin species that appear in the Catalogue Of Life, a global index of species. Click on the name of the penguin you want to see!

At the bottom of the page you’ll find a ‘penguin chart‘. You can use the sortable columns of this chart to order the penguins by genus, weight, height, endangered status and more. Quick link: Penguin Species Chart

Penguins are aquatic, flightless birds in the family Spheniscidae.

Several species of penguin live on Antarctica, the coldest and windiest continent on Earth. Many others make their home on cold, sub-Antarctic islands.

However, not all penguins live in such inhospitable conditions. Some are found in temperate regions, and one species, the endangered Galapagos penguin, lives near the Equator.

On this page you’ll meet every species of penguin alive today. We’ve included information on where each of the species lives, what it looks like, and its IUCN conservation status.

How Many Types Of Penguin Are There?

Scientists disagree over the exact number of different types of penguin. On this page we’ve included the 19 species currently listed in the Catalogue Of Life – an online database of all living things.

(We’ve also included information on penguins not found in the Catalogue Of Life.)

The problem faced by taxonomists (scientists who work out how animals are classified) is that some types of penguin are very closely related. So closely, in fact, that they could be considered to be subspecies of the same species, rather than entirely different species.

Other scientists consider there to be sufficient differences between each type of rockhopper penguin for them to be considered separate species.

With that in mind, let’s meet the penguins …

(For information on subspecies and how animals are classified, visit this page: Animal Classification.)

List of Every Type of Penguin with Pictures and Facts 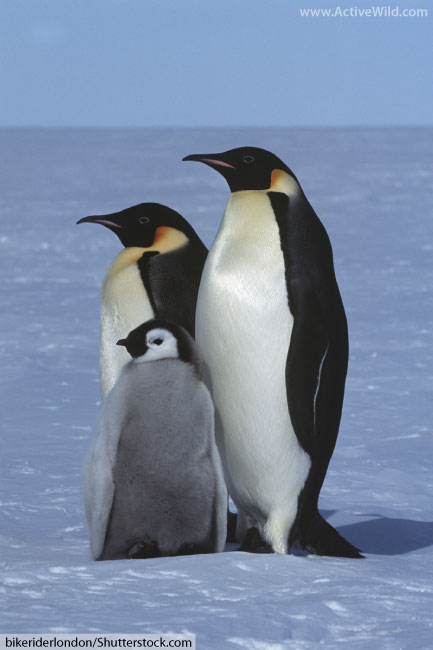 The emperor penguin is the largest type of penguin, being both the heaviest and the tallest species. It is the fifth-largest of all bird species. As well as its large size, its distinguishing features include orange-yellow feathers around its ears and shoulders, and a lower bill that is orange-pink in color.

The emperor penguin is closely related to the king penguin.

The emperor penguin is only found on the continent of Antarctica. Unlike all other penguins, it breeds during the Antarctic winter. The eggs are incubated by the males, who huddle together in large groups for warmth. 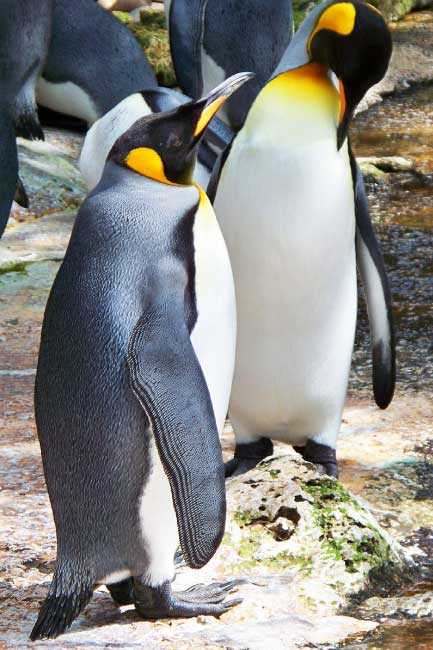 The king penguin is the world’s second-largest penguin species. Like the closely-related emperor penguin, it has a white chest that is orange-yellow towards the neck. The king penguin has bright orange ‘ear patches’.

The king penguin is found in several Antarctic and sub-Antarctic locations, including the Falkland, Crozet and Prince Edward Island groups, Tierra del Fuego and the continent of Antarctica itself. 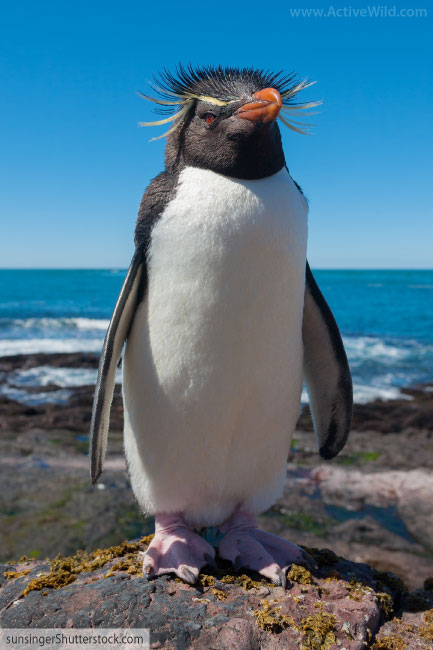 Rockhopper penguins are found on various south Atlantic and Indian Ocean island groups, including Tristan de Cunha, the coastlines of Argentina and Chile, and on Campbell Island in New Zealand.

The southern rockhopper is found on several islands in the South Atlantic, Indian and Pacific Oceans. As its name suggests, it is found further south than the northern variety.

The southern rockhopper penguin has a narrower supercilium (the stripe of yellow over its eyes) and shorter yellow plumes than the northern rockhopper. 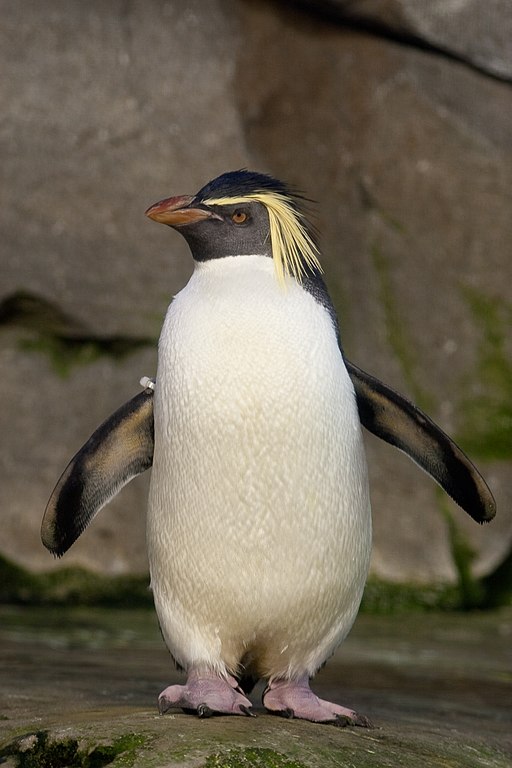 Looking similar in appearance to the closely-related southern rockhopper, the northern rockhopper differs by having longer yellow plumes and a wider supercilium (eye-stripe).

The northern rockhopper penguin is found further north than its southern counterpart. 85% (or more) of the world’s northern rockhoppers are found on the islands of the Tristan da Cunha archipelago and Gough Island in the Atlantic Ocean.

The world population of northern rockhopper penguins has declined by 90% since the 1950’s, and the species is now endangered. 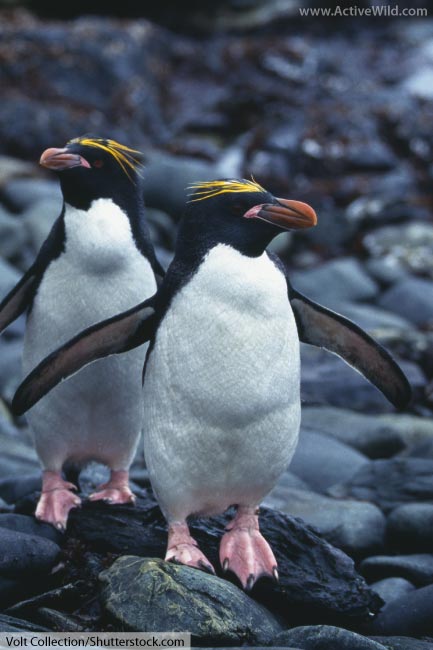 The macaroni penguin has a yellow crest, a black face and red bill. The species was named by English sailors; the penguin’s bright yellow crest reminded them of ‘macaronis’ – followers of an 18th century fashion in which men wore large wigs and flamboyant clothing.

The Macaroni penguin is found in several locations in the Indian and South Atlantic Oceans, including the Crozet, Kerguelen, Heard, South Georgia and Prince Edward Island groups.

The Macaroni penguin is the world’s commonest penguin, with a global population of around 6.3 million breeding pairs. However, the species’ conservation status is ‘vulnerable’ due to recent population declines. 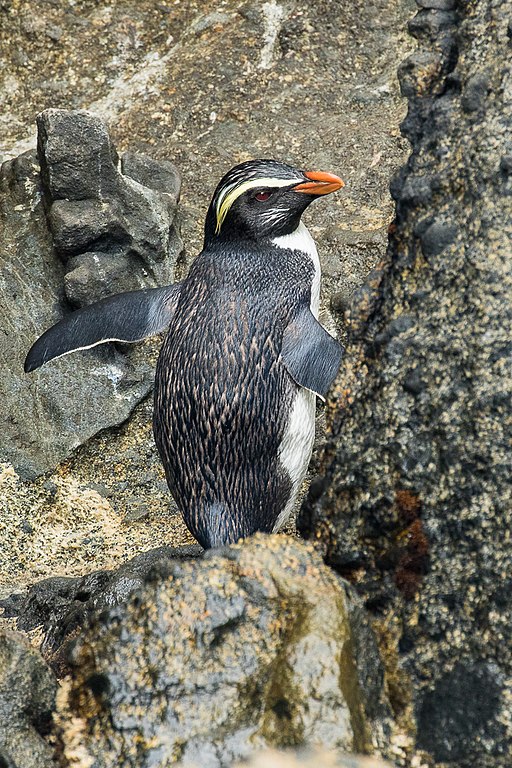 The Fiordland penguin is a crested penguin. It is only found in New Zealand, and is named after the Fiordland region in the southwest of the country’s South Island. 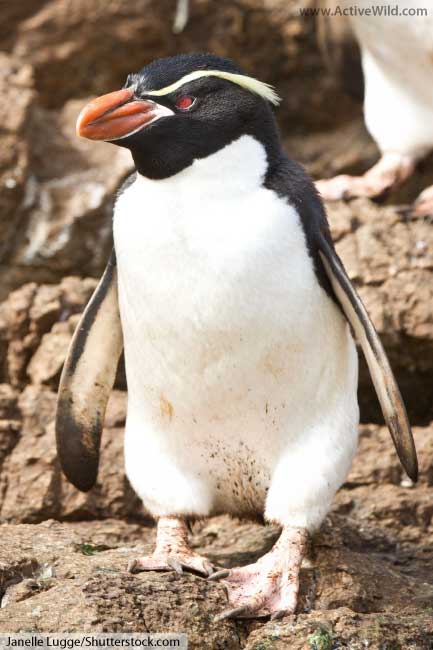 Snares penguin is a species of crested penguin found on (and named after) The Snares, a group of islands off New Zealand’s South Island.

The Snares penguin has a yellow eyebrow-crest, and a heavy red bill. At the base of the bill is an area of bare, pinkish-red skin. 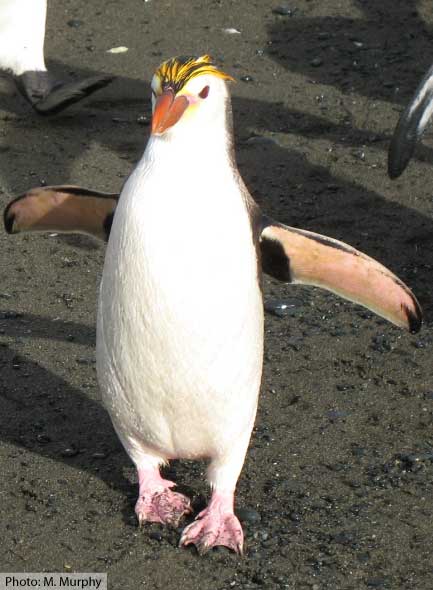 The royal penguin is very closely related to the macaroni penguin. The main difference between the two birds is that the royal penguin has a white face. Many scientists consider them to be the same species.

The royal penguin is found on Macquarie Island (an Australian island in the Pacific Ocean) and surrounding islands.

The erect-crested penguin is found on the Bounty and Antipodes Islands of New Zealand. It is medium-sized, and has a yellow crest extending from its bill to the back of its head. As its name suggests, the crest points upwards. The species is said to be the only crested penguin to be able to raise and lower its crest. 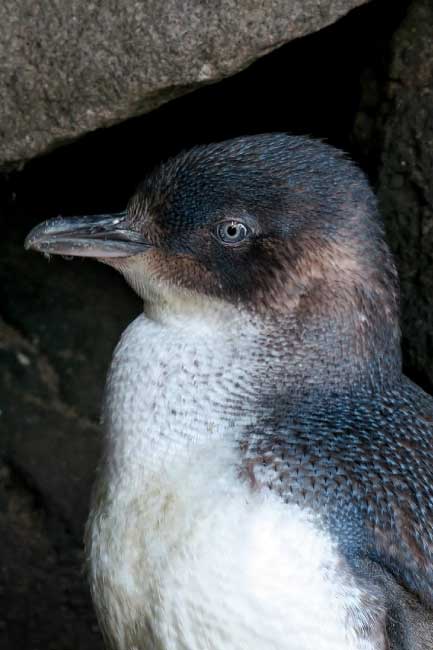 Standing at around 30 cm (12 in.) tall, the little penguin is the world’s smallest species of penguin.

The species can be identified by its small size, dark bill, and the blue tinge of its plumage.

As with the rockhopper penguin, there is some disagreement over exactly how many species of little penguin there are.

The Australian little penguin is found mainly on islands off the southern coast of Australia. There are also breeding grounds on the mainland.

The white-flippered penguin has white markings on its flippers. It is found on Banks Peninsula of New Zealand’s South Island, and on Motunau Island, a nature reserve that lies off the coast of South Island.

The yellow-eyed penguin is the fourth-largest penguin. As its name suggests, it has yellow eyes and a yellow band that runs from eye to eye behind its head. It has a pink bill and pink feet.

The species is found on the coastline of New Zealand’s South Island and also on the Auckland and Campbell Islands.

The Adélie penguin is a medium-sized penguin species. It can be recognized by the distinctive white ring around its eyes, and by the short black feathers that cover most of its bill.

The Adélie penguin is found further south than nearly all other birds. It lives all around the coast of Antarctica.

You can find out more about this species here: Adélie penguin Facts 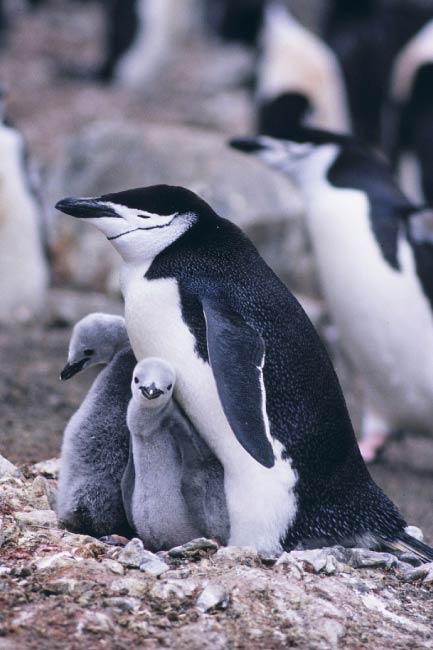 The chinstrap penguin is a mid-sized penguin. It is easily identified by the narrow black strip running under its face. It is this feature that gives the species its name. Other distinguishing features include yellow-brown eyes, and a black ‘cap’ and bill.

The chinstrap penguin is found in many locations in the Southern Ocean, and the southern Pacific and Atlantic Oceans. Areas in which it is found include the Falkland Islands, Argentina, Chile and Antarctica. 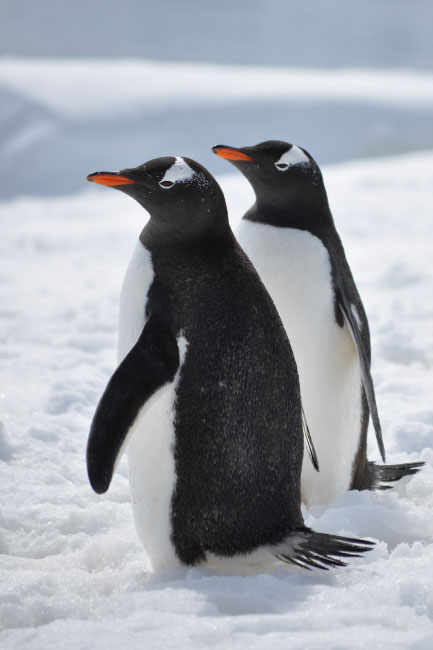 The Gentoo penguin is the third-largest species of penguin. It can be identified by a white stripe that runs from eye to eye over the top of its head. Other distinguishing features include a bright orange bill and orange feet.

The Gentoo penguin is found in several island groups in the sub-Antarctic region, including the Falkland Islands and South Georgia in the southern Atlantic Ocean, and the Kerguelen Islands (also called the desolation Islands) in the southern Indian Ocean.

The Gentoo penguin’s closest relative is the Adélie penguin. 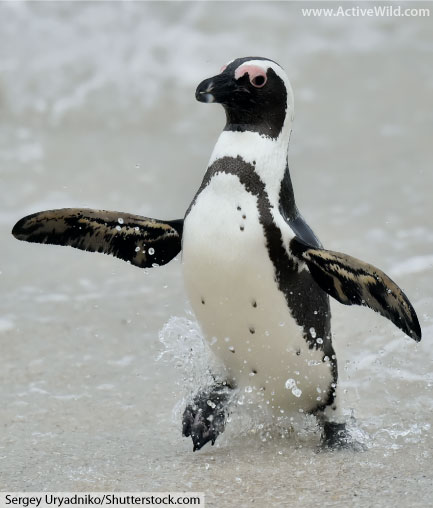 The African penguin is found on islands off the south-western coast of Africa. There are two breeding colonies on the African mainland itself. These are located near Cape Town in South Africa.

The African penguin is one of the smaller types of penguin. It has a black face and bill. On its white chest is a black marking in the shape of an upside-down U.

Above each of the African penguin’s eyes is a patch of pink skin. This is an adaption to help with thermoregulation (i.e. keeping the body at the correct temperature). When it is warm, more blood is sent to this area of skin. The blood is cooled by the air, bringing the penguin’s body temperature down. The extra blood also makes the pink area look darker in color. 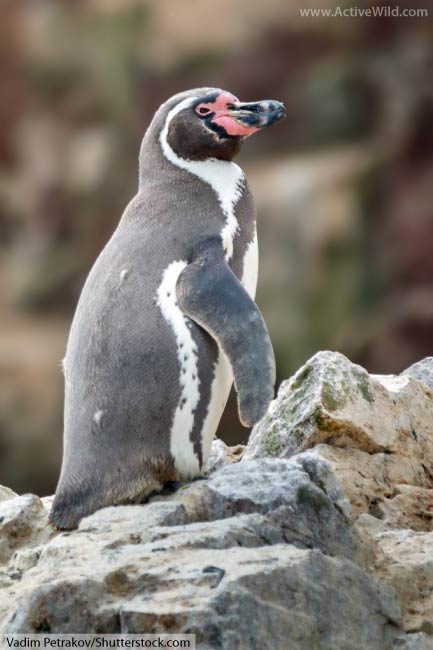 A South American species, the Humboldt penguin is found on the coasts of Chile and Peru. It is occasionally also seen further north in Ecuador and Columbia.

The Humboldt penguin takes its name from the Humboldt Current. This is a current of cold water that flows northwards along the western coast of South America. The Humboldt Current itself was discovered by the Prussian naturalist and explorer Alexander von Humboldt. 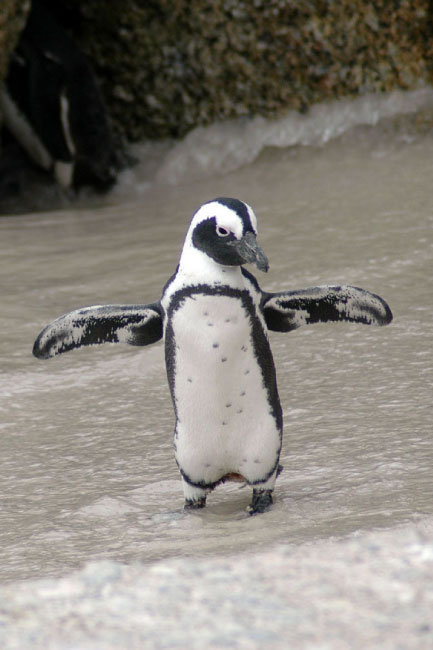 The Magellanic penguin is the commonest of the banded penguins. It is a medium-large penguin with a black band running across its white chest and under its wings. Its face is black with a white border.

The Magellanic penguin is found on the Pacific and Atlantic coasts of southern South America and on the Falkland Islands.

The chart below contains all 19 penguin species that are currently recognized by the IUCN. Click on the title row to sort the chart.

We hope that you have enjoyed discovering the different types of penguins. Over time we’ll be adding further information about each species, so be sure to check back for more penguin information.

Want to find out more about penguins, birds or the animal kingdom? Check out the following pages!

3 thoughts on “Types Of Penguins: A List Of All Penguin Species, With Pictures And Facts”