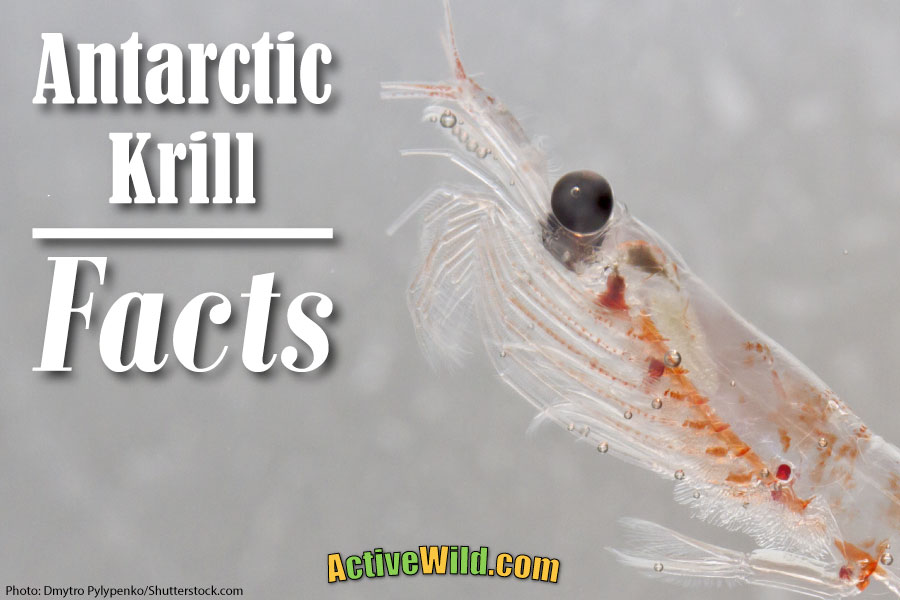 It may be small, but the Antarctic krill plays a vital part in the Antarctic food chain. Some of the best-known Antarctic animals, including whales, seals and penguins, rely on this marine crustacean for food…

What Is Antarctic Krill?

Antarctic Krill Facts At A Glance

Each Antarctic krill weighs around 2 grams, meaning that there are around 500,000 krill in every tonne. Therefore the total number of living Antarctic krill is in the hundreds of trillions. (By comparison, there are only around 3,200 adult tigers in the wild.) 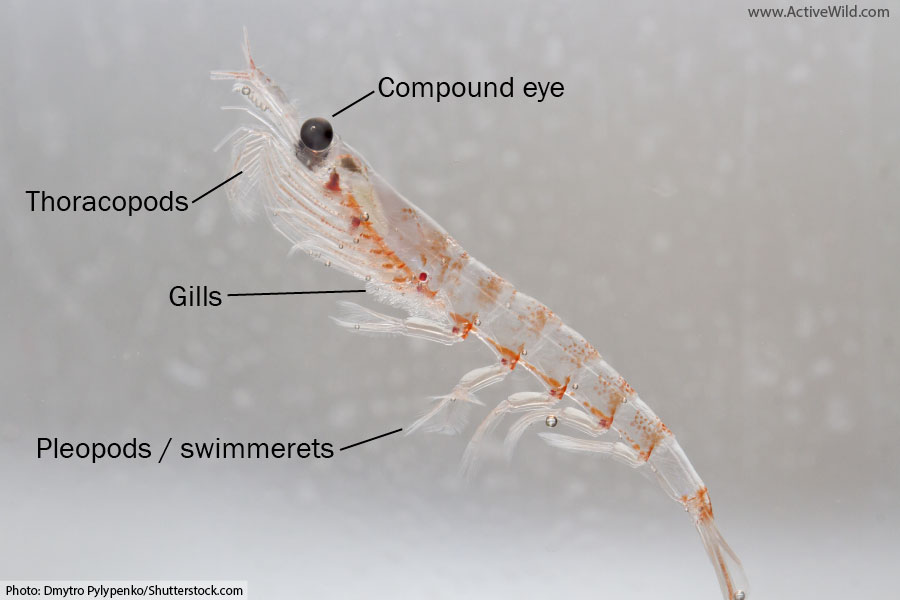 Like all crustaceans, the Antarctic krill has a segmented body which is protected by a hard exoskeleton. The krill’s body has two main parts: the cephalothorax, which combines the head and the thorax, and the pleon, or abdomen.

Pigment present in the Antarctic krill’s body gives it a red color. The skin is largely translucent; through it can be seen the krill’s stomach, which contains the green phytoplankton upon which the crustacean feeds.

Antarctic krill have large, compound eyes. (Unlike our eyes, which have only a single lens, compound eyes consist of multiple lenses.) The external gills of krill can be used to identify them from crustaceans such as shrimp, whose gills are located under the carapace (shell).

The Antarctic krill is a filter feeder. Its thoracopods (front legs) are specially adapted to collect and filter food from the water. The thoracopods are also used to scrape algae from the underside of sea ice.

The krill’s hind legs (those attached to the abdomen) are known as pleopods, or swimmerets. They are used to propel the krill through the water.

Antarctic krill are bioluminescent, which means that they produce and emit light. The chemicals used in this process are thought to come from dinoflagellates. Dinoflagellates are single-celled organisms which make up part of the phytoplankton that is eaten by the krill.

A krill has light-emitting organs located at various parts of its body, including its eyestalk and at the joints of some appendages.

It is thought that bioluminescence may be used by the krill either to form swarms, or in social interaction / mating.

What Animals Are Related To Antarctic Krill?

The Antarctic krill is one of 86 species of krill (source: Catalogue of Life), and one of five that are found in the Southern Ocean.

Krill are crustaceans in the order Euphausiacea. Euphausiacea itself is part of a larger group of crustaceans known as Malacostraca, which also contains crabs, lobsters and shrimp.

An order is a group of related animals. You can find out more about terms such as ‘order’ and ‘family’ on this page: Animal Classification.

Other species of krill include the North Pacific krill (Euphausia pacifica) and the northern krill (Meganyctiphanes norvegica), which is found in the North Atlantic Ocean.

During the day Antarctic krill sink to the depths of the ocean. During the night they make their way to the surface to feed, often congregating in huge swarms. A single swarm can stretch for several kilometers, and can contain 10,000 to 30,000 krill per cubic meter of water.

Swarms are occasionally seen during the day. Krill swarming near the surface can trigger a feeding frenzy involving many other animals.

Known predators of the Antarctic krill include:

What Does Krill Mean?

How Big Are Antarctic Krill?

How Fast Do Antarctic Krill Swim?

Antarctic krill swim at around 5 to 10 cm (2 to 4 inches) per second. When threatened they can propel themselves even faster by flipping their tails and swimming backwards – this is known as ‘lobstering’.

What Do Antarctic Krill Eat?

Antarctic krill feed on phytoplankton – microscopic organisms that live near the surface of the ocean, most of which obtain energy via photosynthesis.

Where Are Antarctic Krill Found?

Antarctic krill have a circumpolar distribution in the Southern Ocean. They are found all around Antarctica, and are particularly densely-populated around the Arctic Peninsula.

What Type Of Animal Is Antarctic Krill?

Antarctic krill are crustaceans, just like crabs, lobsters and shrimp. The Antarctic krill is one of 86 currently recognized species of krill. Together they make up a sub-group within Crustacea known as Euphausiacea.

You can find out more about crustaceans on this page: Crustaceans: the Ultimate Guide