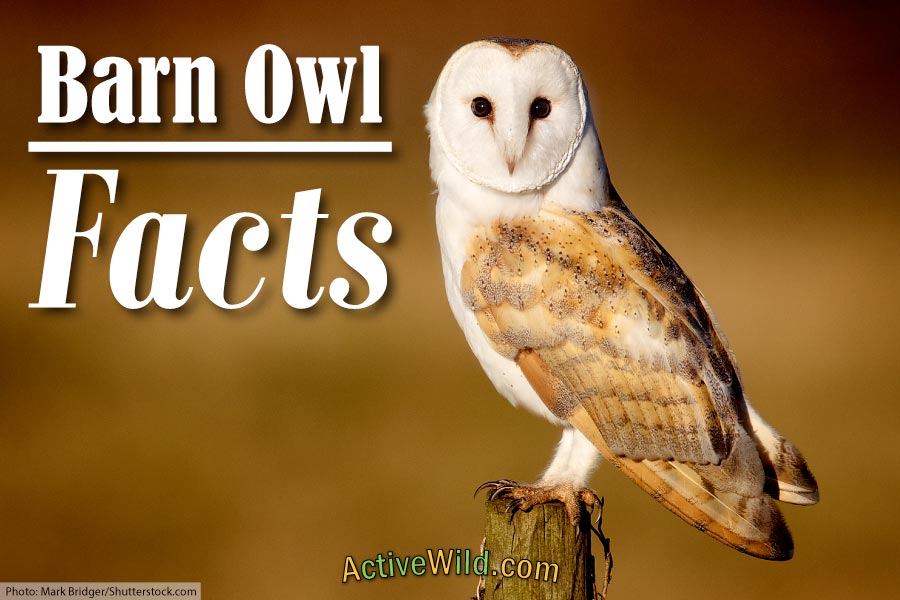 The barn owl is a distinctive pale brown and white bird that can often be seen hunting over farmland either at dawn or at dusk. Its ghostly, silent flight and evil-sounding shriek have given the species a number of alternative names, including ‘death owl’, ‘demon owl’, ‘ghost owl’ and ‘screech owl’.

This wide-ranging bird is found on every continent except Antarctica (although some biologists separate the barn owl into different species depending on where they are found).

Barn Owl Facts at a Glance

What Is A Barn Owl?

A barn owl is a medium-sized owl in the family Tytonidae. It has a white head, chest and legs, and a pale, golden-brown back and wings (the undersides of the wings are white / creamy brown). It typically inhabits farmland and open fields, sleeping in trees or – as its name suggests – in deserted farm buildings, including barns. The barn owl has a nocturnal and crepuscular lifestyle, being active at dawn and dusk as well as at night. 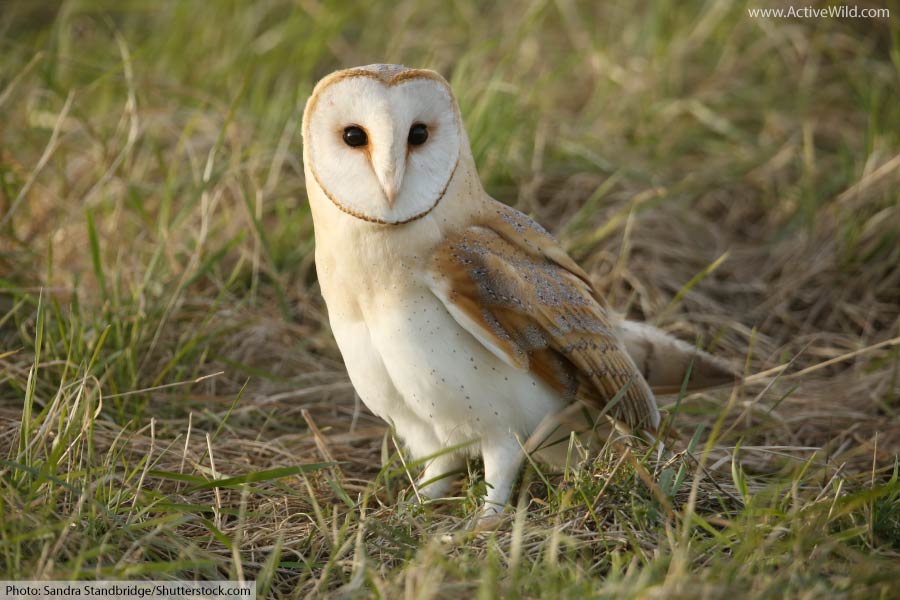 The barn owl has an extremely large distribution range (i.e. the area in which it is found) – larger than that of all other owls, and most other birds. The only continent on which the barn owl is not found is Antarctica.

Despite its large range, the owl is often uncommon or rare in the regions in which it is found.

The barn owl’s appearance varies considerably depending on the region in which it is found, and 32 subspecies are currently recognized (source: Catalogue of Life).

Is There More Than One Species Of Barn Owl?

Many authorities consider all of the world’s barn owls to be a single species (this is how we’ve described the species on this page).

How to Recognize a Barn Owl 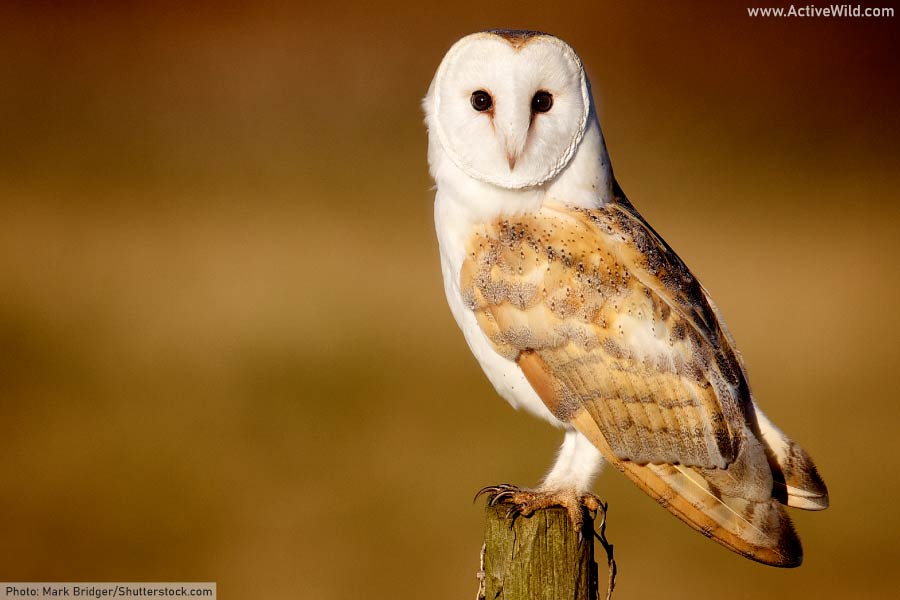 Throughout most of its range, the barn owl is unmistakable; its white or very pale undersides and light, golden-brown back differentiating it from other owls. This basic coloration differs from region to region, with birds in some parts of the world having darker brown upperparts or having a darker, cream-colored or light-brown chest.

The best time to see a barn owl is at dawn or at dusk. The barn owl patrols the edges of fields and woodlands, flying slowly and silently. Its legs will often be dangling, especially in the moments before it drops down onto its unsuspecting prey. The owl may also hover for short periods before striking.

Although a barn owl has good vision, it relies more on its excellent sense of hearing to locate prey. The barn owls’ hearing is among the most sensitive of any animal. It is particularly good at picking up the high-pitched sounds made by rodents as they scurry through the undergrowth.

The owl’s disk-shaped face helps to direct sound to the ears, which are located in the facial disk behind the eyes.

A serrated leading edge and hair-like fringe at the rear of a barn owl’s flight feathers help to quieten the air as it flows over the feather when the bird is flying. A barn owl is capable of flying almost silently and at slow speeds.

In rainy weather the owl has a much harder time finding food. This is because the adaptations to its feathers result in them being less waterproof than those of other birds, resulting in noisier and less efficient flight. Rain also masks the sound of its prey.

Does A Barn Owl Hoot?

A barn owl does not hoot. Instead, it produces a variety of hisses and screeches – rather unpleasant sounds for such a graceful bird!

The barn owl’s vocalizations have given it the alternative name of ‘screech owl’.

The barn owl is a member of the family Tytonidae. This family contains 15 living species, all of which are known as ‘barn owls’. In order to differentiate Tyto alba from the other members of the group, the species is often referred to as the ‘common barn owl’.

Tytonidae (the barn owls) is one of two owl families, the other being Strigidae (the true, or typical, owls). The true owl family is larger, containing 184 recognized species. The two owl families make up the order Strigiformes (owls).

Where Are Barn Owls Found? 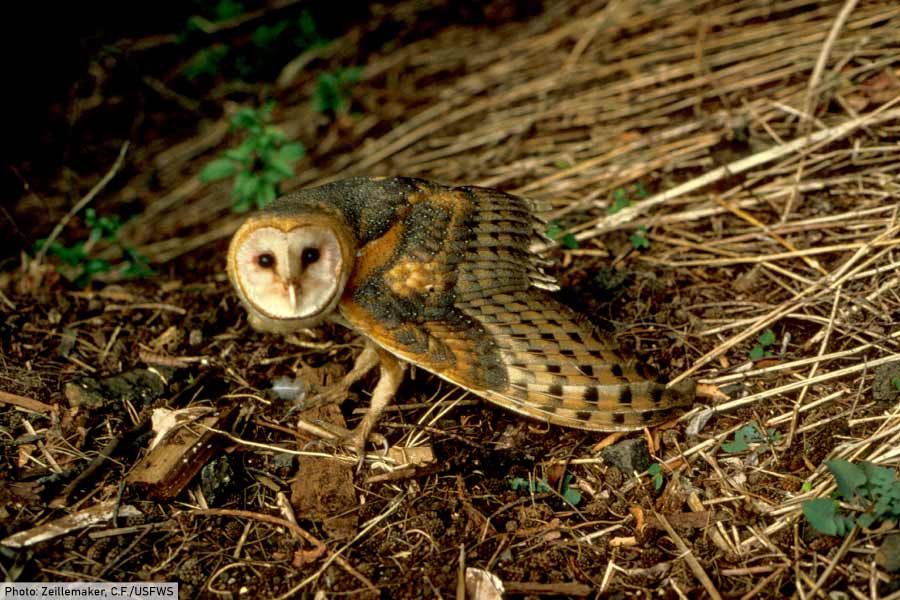 The barn owl occurs in a variety of habitats, including: farmland, grassland, heathland, marshes, and at the edge of woodlands.

One of the best habitats for barn owls (especially in the UK) is rough grassland. The grass provides cover for the voles, mice and shrews which form the majority of the owl’s diet.

In the UK well over a quarter of all breeding barn owls nest in man-made nesting boxes.

What Do Barn Owls Eat?

Because the barn owl is found over such a wide area, its diet varies from region to region. Small rodents (in particular voles) and shrews form the majority of the owl’s diet in North America and Europe.

In other areas, the barn owl preys on a wider variety of animals, including mice, rats, lizards and amphibians. Birds, bats and insects may also be eaten.

The barn owl will usually eat three or four prey animals in one night.

A barn owl swallows its prey either whole or in big chunks. Any part of its prey the owl is unable to digest is regurgitated (coughed up) later as a pellet. A barn owl pellet is black and thumb-sized. Pellets are produced around 6 hours (or more) after the owl originally ate its prey.

By dissecting a barn owl’s pellet, you can find out what it has been eating.

Barn owls mate for life, usually returning to the same nesting site year after year. The breeding season usually coincides with the time local prey is most abundant.

The barn owl is a cavity nester, nesting in in holes in trees and in similar spaces in buildings. The nest consists of the remains of pellets regurgitated by the female. The owl will occasionally share its nesting space with birds of another species.

Typical barn owl clutch size is from 4 to 6 eggs. These are laid in two day intervals, thereby increasing the chances of at least one chick surviving periods in which prey is scarce.

The owl’s eggs hatch after around 30 to 32 days, and begin to fledge around 9 weeks after hatching. In another month the young owls are fully independent.

Although in some regions barn owls are rare, their world population is relatively large (between 4 and 10 million mature individuals) and healthy. The species has a conservation status of ‘Least Concern’.

1 thought on “Barn Owls Facts: Get The Lowdown On This Silent Nocturnal Hunter!”