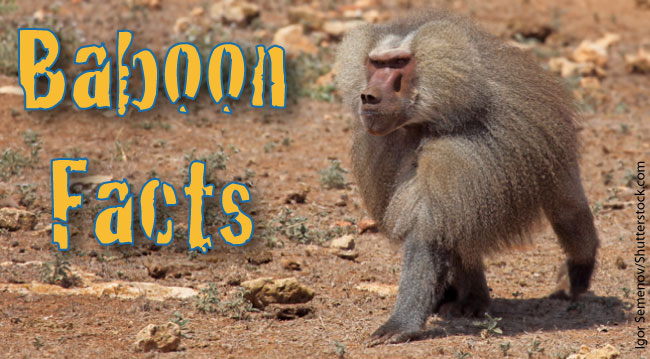 Baboons are monkeys that live in Africa and Arabia. Most baboons are social animals that live in groups called ‘troops’. This page contains baboon facts, and is part of our African Animals series.

Baboons are a group of several species of monkey that live in Africa and Arabia. There are 5 species commonly recognized as baboons: the chamaca baboon (Papio ursinus), the western baboon (also known as the red, or Guinea baboon) (Papio papio), the hamadryas baboon (Papio hamadryas), the olive baboon (Papio anubis) and the yellow baboon (Papio cynocephalus).

Most baboons live in groups called “troops”. Group sizes can be as small as 5 or as large as 250 animals – an average group size is about 50. The group size depends on factors such as the species, time of year and food availability. Social organization in baboon troops is highly complex. Males use displays of physical strength to dominate rivals. Troop members spend many hours intensely grooming each other to remove insects and dead skin, but also to maintain social bonds.

In the video below, you can see how chamaca baboons operate as a troop when they see off a cheetah from their territory.

Where Do Baboons Live?

Baboons range in size and weight depending on the species. The smallest is the Guinea baboon which is 20 in (50 cm) and weighs only 30 lb (14 kg) whereas the largest chacma baboon can be 47 in (120 cm) and weigh 90 lb (40 kg). Some of them are a grayish color whereas others are black or brownish. Some have a white mane. All baboons have a large head with a thick eye-brow ridge, long dog-like muzzle with powerful jaws and sharp canine teeth. Their eyes are close-set and on the front of their faces, giving them excellent vision. They have thick fur, except on their muzzles and their buttocks.

Baboons are well known for having protruding buttocks with rough, sometimes colored areas, called ischial callosities. These are nerveless pads of skin that enable the baboon to sit comfortably for long periods of time when they are watching for predators. Like other Old World monkeys, their tail is not prehensile (it cannot grip), however, they do climb trees. In all baboon species there are differences between the males and the females. Usually this is a difference in size, but sometimes it may be color or canine teeth differences.

Baboons are omnivorous; although they mostly eat plants, meat does form part of their diet. The meat they eat includes insects and, when available, fish (trout and salmon), hares, birds, small antelopes, vervet monkeys and shellfish. They forage both during the day and night. It has been known for baboons to raid human dwellings, and in some cases, they have been known to prey on livestock (sheep and goats) and to eat large amounts of crops.

Female baboons initiate mating by presenting their swollen rump to the male, often directly into his face. After a successful mating, females are typically pregnant for about 6 months. They usually give birth to a single infant which weighs approximately 14 oz (400 g) and has black skin when born. The females tend to take care of the young rather than the males, although in some species, several females collaborate and care for all of their offspring. The young are weaned after about 1 year and reach sexual maturity in 5 to 8 years. Baboon males always leave their birth group, whereas females stay in the same group their whole lives. Baboons in captivity can live up to 45 years, although in the wild, their life expectancy is about 30 years.

Baboons are not endangered but they are threatened by habitat-loss due to agricultural expansion, overgrazing, large irrigation projects and overall human settlements.

We hope that you have enjoyed reading about baboons. You can find out about more amazing African animals here.