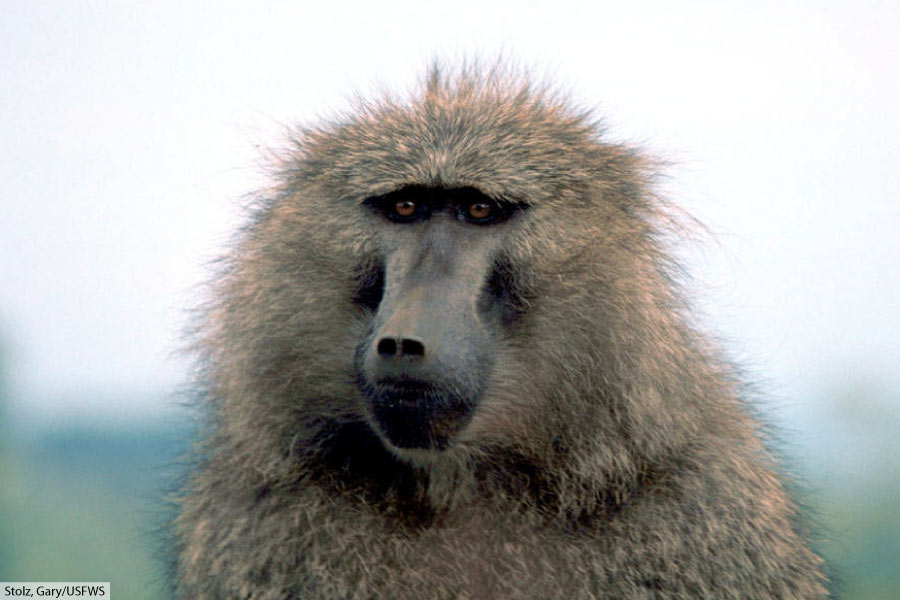 One of five species of baboon, the olive baboon is a species of monkey found in equatorial Africa. It is predominantly a savanna species, living in groups known as troops that typically contain 20 to 60 animals, but which can be significantly larger.

Olive Baboon Facts At A Glance

The olive baboon gets its name from the slight olive-green tinge to its fur when the animal is viewed from a distance.

The species is also known as the ‘Anubis baboon’ due to the resemblance of the animal’s black, dog-like face to the head of the Egyptian jackal god Anubis.

The olive baboon has long limbs, a hairless muzzle, hairless buttocks and a tail that stands erect for the first quarter and then bends sharply downwards. The animal’s small eyes are close-set.

The olive baboon’s thick coat is made up of black, brown and yellowish hairs, giving the animal an overall greenish-gray appearance.

Male olive baboons are significantly larger than females. They also have longer canine teeth and a mane of long hair around the head, cheeks and neck.

Where Is The Olive Baboon Found?

The olive baboon’s distribution range covers most of central sub-Saharan Africa, extending to Mali, Guinea and Sierra Leone in the east, to Ethiopia in the west, and to Tanzania and the Democratic Republic of Congo in the south.

A few isolated populations also occur in the mountainous regions of the Sahara in northern Niger and Chad.

The olive baboon commonly cross-breeds with other baboon species, such as the hamadryas baboon, and hybrid zones form in areas in which the species’ ranges overlap.

The olive baboon is most often found in open savanna habitats, but also inhabits tropical evergreen forests, semi-arid woodlands, and even cultivated areas near human settlements. The species can be found at elevations of between 360 and 2,500 m (1,200 to 8,200 ft.).

The olive baboon is a highly social species. The animal lives in troops (groups) of 15 to 150 individuals.

Female olive baboons remain in their natal troops and form strong social bonds with each other. Female rank (i.e. the individual’s ‘importance’ within the group) is passed down from mother to daughter and tends to remain stable throughout the animal’s life.

In contrast, male olive baboons join a new troop when they become sexually mature. Fights between males are frequent as the new arrivals attempt to secure a higher position in the group.

Females often form long-lasting social relationships known as ‘friendships’ with one or two males at a time. The ‘friends’ spend time grooming each other and travel and forage together. A female may form friendships with up to nine males in her lifetime.

The olive baboon is active during the day. The animal usually spends most of its waking hours on the ground but sleeps in the trees or on rocky cliffs at night. 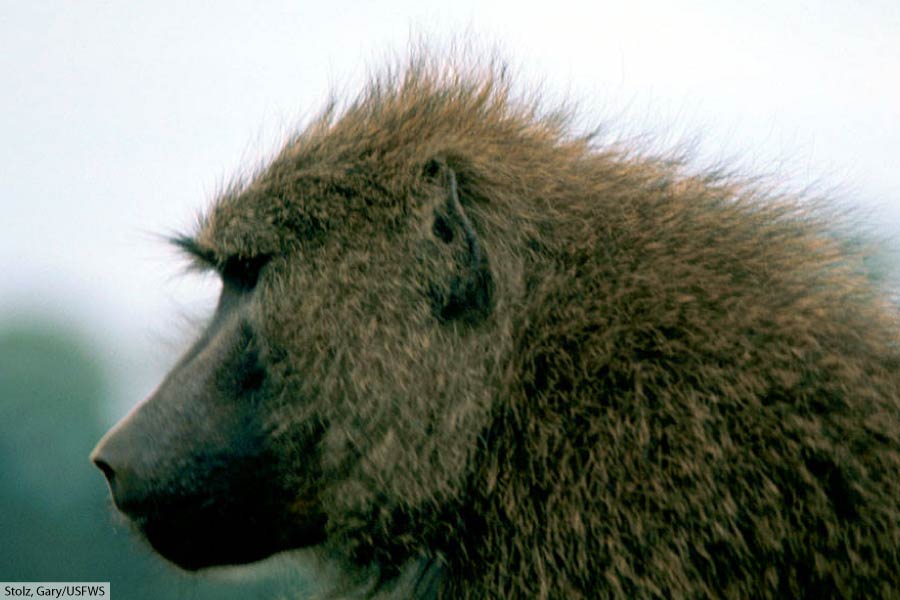 A common vocalization heard in a baboon troop is known as the ‘basic grunt’ – individuals of all ages use it in a variety of friendly interactions. The baboons may also roar, bark, screech and scream to signal various emotions ranging from aggression to fear.

Visual signals also play a large part in olive baboon interactions. The animals often smack their lips when greeting other individuals. Aggression is communicated vie various expressions and gestures, including staring, yawning, and slapping the ground.

If a threat is detected, the baboons vocalize to alert the rest of the troop, and quickly flee to safety. Male baboons may also attack predators in order to protect the females and the young.

The olive baboon mates throughout the year, with both males and females mating with multiple partners. Female baboons become receptive for 15 to 20 days at a time. During this time, their hindquarters swell and turn bright pink / red to signal their readiness to mate.

Temporary ‘consortships’ between males and receptive females are common. These close associations are often brief, but some last for as long as two weeks. During this time the male aggressively guards the female from his rivals and copulates with her frequently.

The gestation period is about 6 months, after which the female gives birth to a single infant. The infant has a black coat and weighs roughly 1 kg (2.2 lb.).

The infant is helpless for the first few days of its life. At one week old, a young baboon is able to cling onto its mother. The mother nurses and carries her young for 10 to 12 months.

While the mother provides the majority of the parental care, male baboons also occasionally groom, soothe, and protect the infants of their female friends.

What Do Olive Baboons Eat?

Like most primates, the olive baboon is omnivorous. The species is highly adaptable and able to make use of a wide range of food sources.

The animal may also feed on mushrooms, eggs, and invertebrates such as insects, scorpions, and spiders. Occasionally olive baboons hunt animals such as birds, hares, rodents, foxes, other primates, and small ungulates (hoofed animals).

Olive baboons – especially infants and juveniles – are vulnerable to predation by animals such as leopards, lions, hyenas, cheetahs, Nile crocodiles, and chimpanzees.

Is The Olive Baboon Endangered?

The olive baboon is rated ‘Least Concern’ by the IUCN.

The species has a large distribution range and is locally common.

The animal is considered a crop raider and a pest species in many areas and is subject to eradication campaigns. These campaigns don’t seem to have a significant effect on the species as a whole.

Animals: The Ultimate Guide to the Animal Kingdom

Animals A to Z