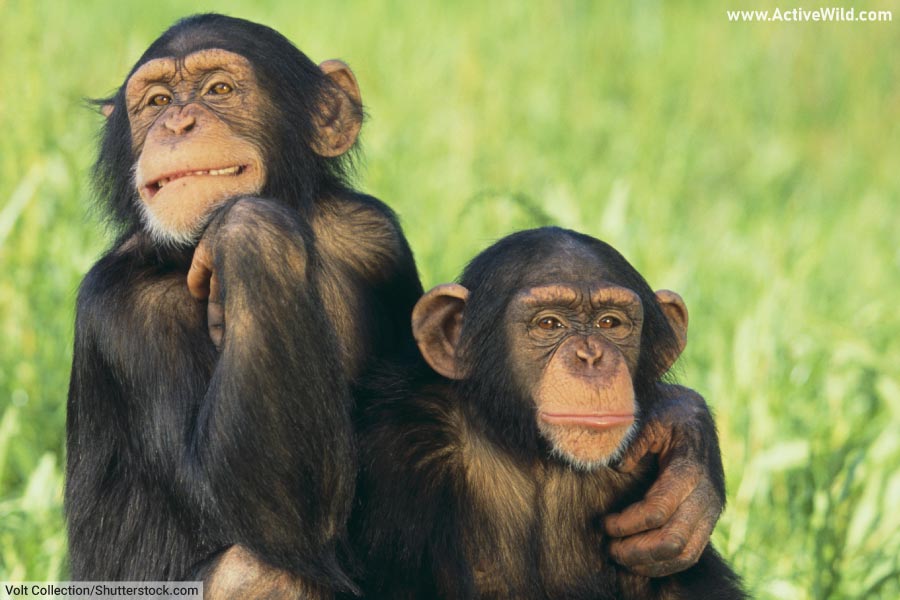 Researchers have recorded a chimpanzee showing her mother a leaf simply for the sake of sharing, revealing that it’s not just humans who enjoy sharing things that they have found.

It’s well known that from a young age, children like to point out objects to others, and it had previously been thought that this was a uniquely human trait.

Evidence that chimpanzees also exhibit attention-sharing behavior was recently obtained by researchers from the Universities of Warwick and York while studying the Ngogo chimpanzee community in Uganda’s Kibale National Park. (source)

Fiona, an adult chimpanzee, was grooming her mother, Sutherland, before plucking a leaf from a nearby sapling. After grooming the leaf, Fiona held it out in front of her mother’s face and when she didn’t respond, repositioned her arm until Sutherland moved her eyes and head towards it. Happy that her mother had seen the leaf, Fiona returned to grooming it.

Leaf grooming, a behavior often seen in chimps, involves leaves being plucked from trees and groomed with the mouth or fingers. It’s unclear why chimps do this, but it usually happens after they have been grooming themselves or other chimps, so they could be pointing out parasites that they find on the leaves.

Humans love to share experiences with one another – social media is a clear example of this. From as young as 10 months old, we start to use gestures to direct someone’s attention or to get them to do something for us.

Although chimpanzees are our closest animal relatives, sharing almost 99% of our DNA, there are wide differences in our levels of intelligence.

Whereas chimps have been known to direct the attention either of humans or other chimps in order to ask for something that they want, such as a favorite toy, or to be groomed in a specific location, they have never been known to share attention simply for the sake of sharing.

Was Fiona Gesturing For Another Reason?

One theory for Fiona’s behavior is that she was trying to get her mother’s attention to share food or play. To rule this out, the researchers watched over 80 clips of chimpanzees engaging in leaf grooming, finding that only five played after examining a leaf, and none of the chimps ate anything off the leaves. Furthermore, this particular type of leaf is not eaten by the chimpanzees, so the behavior cannot have been an offering of food.

In Fiona’s case, there was no evidence that leaf grooming led to playing or sharing food, so it was concluded that she wasn’t trying to initiate these activities. It seems that her goal was simply to get her mother to look at the leaf, because once Sutherland had seen the leaf, Fiona stopped gesturing.

What Can We Learn From This Behavior?

It has been argued that our ability to share experiences with others helped us to evolve the abilities that separate us from other species, including language and cooperation. This discovery raises new questions both on how these abilities evolved, and whether engaging in this behavior more regularly than other species can explain how human social behavior evolved.

It was noted that, although it seems that Fiona is showing Sutherland a leaf, the chimps do not exchange a knowing look as humans do when they are sharing attention. The chimps might be showing a simpler version of the behavior seen in humans.

How Intelligent Are Chimpanzees?

Chimpanzees have been the subjects of decades of research into animal intelligence, and the apes have been found to be among the most intelligent of all animals.

Chimpanzees are one of only a handful of species to have passed the mirror test for self -awareness.

The mirror test involves putting anesthetizing an animal and marking a part of its body that cannot be seen, such as the forehead. Upon waking, the animal is presented with a mirror. If the animal shows an interest in the mark, it is thought to be able to recognize the reflection as being itself and not another animal. (source)

Chimpanzees have shown signs of culture, passing on specific tool use and foraging techniques to their young. They also exhibit complex behaviors when a group member dies. When sudden death occurs, group members will show aggressive displays with loud vocalizations.

In the case of a dying elder, family members will care for them, test for signs of life, clean the corpse and later avoid the area where the death occurred – all behaviors that reflect how humans respond to the death of a loved one. (source)

One of the best examples of chimpanzee intelligence is tool use. Nearly all chimp populations have been recorded using tools such as sticks, rocks, grass, and leaves in order to perform a variety of tasks.

When foraging for termites or ants, the chimps use sticks to extract the insects from their nests. Sticks are also used for scooping honey from beehives, with much longer sticks being used for the hives of more dangerous bees.

Some groups of chimps crack open the shells of hard nuts with stones, often bringing their stone tools with them when foraging, demonstrating forethought and planning. (source)

Archeological research has shown that chimpanzees have been using stone tools for at least 4,300 years, which predates the first settled farming villages in the African rainforest. This suggests that the use of these stone tools was inherited from a common ancestor, rather than through invention by later hominins or by imitation. (source)

Chimpanzees in Senegal have been found to sharpen sticks with their teeth, specifically for spearing bushbabies out of holes in trees, and an individual in Eastern Africa was seen using a modified branch to catch a squirrel.

Like humans, chimpanzees use a range of facial expressions, postures, and sounds to communicate. Their faces are very expressive, which is important for close-up, face-to-face encounters. Chimps use vocalizations similar to laughter in response to physical contact such as tickling and wrestling, and they have specific calls which signal social rank and help to keep groups together.

When traveling, chimpanzees keep in contact with other group members by drumming, a behavior that involves the chimps beating their hands and feet on tree trunks.

Although the chimpanzees’ attention-sharing behavior marks a remarkable discovery in the field of chimpanzee behavior, it remains a single observation. Further evidence will be required for the researchers’ claims to be fully supported by the scientific community.

Researchers are keen for future studies to find more examples of this behavior from a larger number of chimpanzees, particularly from those who share a strong social bond like Fiona and Sutherland.

In support of the researchers’ claims, the sharing behavior was not competitive, nor did it involve feeding, mating, or aggression. This suggests that, in very specific social situations, wild chimpanzees may want to share attention simply for the sake of sharing.