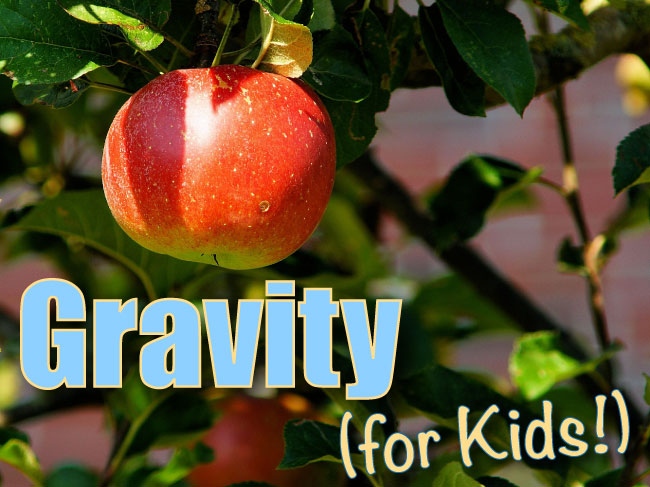 Gravity is the force that keeps us from floating off into space. It literally keeps our feet on the ground! We feel the effects of gravity every second of our lives (unless we’re astronauts), but most of us don’t give it a second thought. This article sets out to explain gravity for kids – and anyone else who has ever wondered why they fall down, rather than up.

Before we get started, here’s a question:

If I had a 1kg weight in one hand, and a 100g weight in the other hand, and dropped them at exactly the same time, which would fall the fastest and therefore land first?

You’ll find the answer lower down the page!

Let’s start at the beginning.

If you drop a stone, it falls to the floor. Why is this?

Everyone knows that the answer is ‘Gravity’!

But what is gravity? It’s more than just a word!

The real answer is that a force – a force we call gravity – is acting on the stone, and pulling it towards the Earth.

Gravity is, quite simply, a force of attraction between objects. The stone is ‘attracted’ to – pulled towards – the Earth.

Thanks to Isaac Newton, we know that:

The more mass an object has, the bigger the force of attraction.

The closer something is, the bigger the force of attraction.

The Earth, having a very large mass, and being very close, exerts a strong pull on anything in its vicinity, including:

a stone when you drop it,

your body when you fall over,

and something large and round flying above your head …

But why doesn’t the moon come crashing into the Earth? And why didn’t Neil Armstrong come falling towards the Earth when he took his ‘small step for a man’?

We’ll get to that. But first we’re going to take a look at how we came to understand gravity.

The Discovery of Gravity

Back to the question from the top of the page:

If I had a 1kg weight in one hand, and a 100g weight in the other hand, and dropped them at exactly the same time, which would fall the fastest … and therefore land first?

The answer (which I hope you got right) is that they would both fall at the same speed (or, more specifically, with the same acceleration), and both would hit the ground at the same time.

Don’t worry if you got it wrong. Even Aristotle (who lived from 384 to 322 BC) believed that heavier objects fall faster than lighter objects, so you’re in good company!

In fact, most people believed this until around 1638, when Italian astronomer Galileo Galilei proved that objects fall at the same speed – whatever their weight (or, strictly speaking, their mass. See this article to find out the difference).

Note: An astronomer is someone who studies ‘celestial bodies’, such as moons, stars, planets, comets and galaxies.

Another note: We refer to Galileo Galilei by his first name, for the very good reason that that was how he referred to himself, as was the custom in Italy at the time.

The story goes that Galileo proved his theory by dropping different-sized balls from the leaning tower of Pisa.

He found that the speed at which an object falls is determined not by how heavy it is, but by how long it has been falling.

Galileo’s Experiment Repeated … On The Moon!

In 1971 astronaut Dave Scott performed a similar experiment to Galileo’s. Not from the leaning tower of Pisa, but on the moon. Scott dropped a feather and a hammer, and – surprise, surprise –both reached the surface of the moon at the same time.

Galileo calculated the rate at which objects accelerate while falling to Earth. That rate is now known to be 9.81 m/s² – although this figure changes slightly depending on whereabouts on Earth it is measured.

The figure also ignores the effects of air resistance and any other factors which may create anything other than a perfect, frictionless fall.

Galileo increased our understanding of gravity, but even he couldn’t explain why it was that things fell to the ground in the first place.

It was up to Englishman Isaac Newton – arguably the greatest scientist who ever lived – to realise what gravity actually was.

Like all scientists, Newton used the work of other scientists as a basis for his own theories.

German astronomer Johannes Kepler had worked out the rotation of the planets round the sun (using observations made by Danish astronomer Tycho Brahe).

Using Kepler’s laws of planetary motion, Newton realised that gravity was a force of attraction, and the size of the force depended both on the mass of the objects involved, and the distance they were from each other.

The law can be written as an equation:

The force (F) between two objects of masses m1 and m2 is equal to the product of their masses divided by the square of the distance (r) between them.

G is the gravitational constant. It remains the same wherever it is applied in the Universe.

Using Newton’s laws, we can find out why two objects of different mass fall with the same acceleration.

Basically, if the mass of an object is doubled, the gravitational force is doubled, but the rate of acceleration remains the same.

If the mass of an object is halved, then the gravitational force is halved, but again the rate of acceleration remains the same.

Using Newton’s Law Of Universal Gravitation, scientists were able to calculate the presence of Neptune before it was ‘properly’ discovered.

In the 1820s it was found that Uranus (then the most distant discovered planet) was not where Newton’s laws suggested it should be.

Over the next decades, astronomers in England and France independently concluded that Uranus’s movement was being affected by another, unknown, planet, and calculated where this other planet would appear. This planet was Neptune, and it was found in 1846, proving that Newson’s law was correct.

It was Neptune’s gravitational pull that was affecting the orbit of Uranus.

Gravity, The Moon, And Tides

We’ve found that gravity is the force of attraction between two objects.

Every particle of matter is attracted to every other particle in the galaxy, but the force exerted between individual particles is very small, because their mass is very small.

But with large objects, such as the moon and the Earth, the force of attraction is very strong.

So strong, in fact, that it’s enough to keep the moon spinning around the Earth, rather than flying off into space.

Because the moon is smaller, and less dense, than Earth, it has a significantly smaller mass. Therefore the force of gravity on the moon is much smaller. Around 17% of the Earth’s, in fact.

Neil Armstrong’s weight on the moon was only 17% of what it was on Earth. This enabled him to jump higher than he could on Earth, but was still enough to bring him back to the Moon’s surface.

Although the mass of the moon is much less than that of Earth’s, it still affects the Earth. The force it exerts as it orbits the Earth pulls the oceans towards it, causing tides.

We’ve covered a lot in this article. Thanks to Galileo you’ve found that all objects (a stone, you, a grand piano) fall at the same rate, no matter what their mass.

Again, thanks to Galileo, you’ve found that on Earth, objects accelerate at 9.81 m/s² (give or take) when dropped, and that this figure varies ever so slightly depending on where you are on the Earth.

Newton’s work showed us that gravity is a force of attraction between objects, and is dependent both on the masses of the objects involved, and on the distance they are from each other.

We’ve found that the moon is responsible for pulling the seas towards it, making the tides go out and come back in again.

Why not read more about the lives and work of the scientists in the article? Many of them made other incredible discoveries that were not just related to gravity.