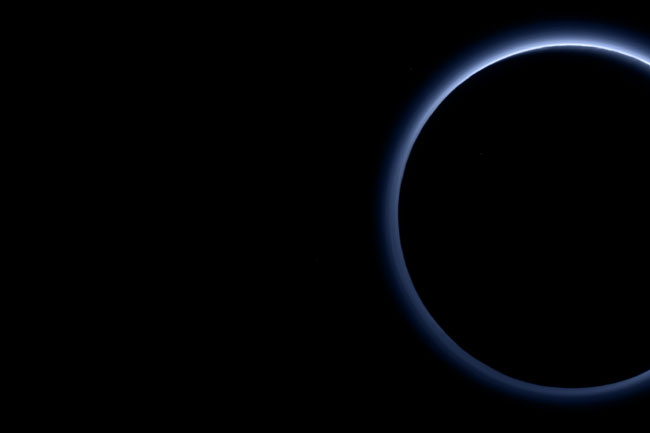 Nasa’s New Horizons spacecraft has recently taken some amazing pictures of Pluto, revealing that the dwarf planet has blue sky!

Learn more about the discovery of blue sky on Pluto …

Pluto And The Kuiper Belt

Pluto is a frozen dwarf planet that lies beyond the 8 planets of the solar system. Pluto is an incredible 3.7 billion miles (5.9 billion kilometres) from the sun.

Nasa’s New Horizons mission blasted off from Cape Canaveral Air Force Station in Florida on 9th January, 2006. It is man’s first mission to Pluto and the Kuiper belt.

The spacecraft (pictured at the bottom of the page) was carried into space on board a Lockheed Martin Atlas V rocket.

New Horizons’ task is to explore Pluto and other objects in the Kuiper Belt – a region in space filled with a vast number of icy bodies, including asteroids, comets and dwarf planets.

Nasa estimates that there could be hundreds of thousands of objects larger than 100 km (62 miles) across, and over a trillion comets in the Kuiper belt!

As planned, the New Horizons reached Pluto in July 2015, and proceeded to use its formidable array of equipment to collect data on the dwarf planet.

Not only has New Horizons revealed that Pluto has blue skies, it has also found water ice on the dwarf planet. All of the photos of Pluto on this page were taken by New Horizons.

Look at the photos on this page, and consider how incredible it is that we are able to see images of the surface of a world billions of miles from the Earth.

Nasa also recently announced that they had discovered flowing water on Mars. Read all about it here.

Information and images from Nasa