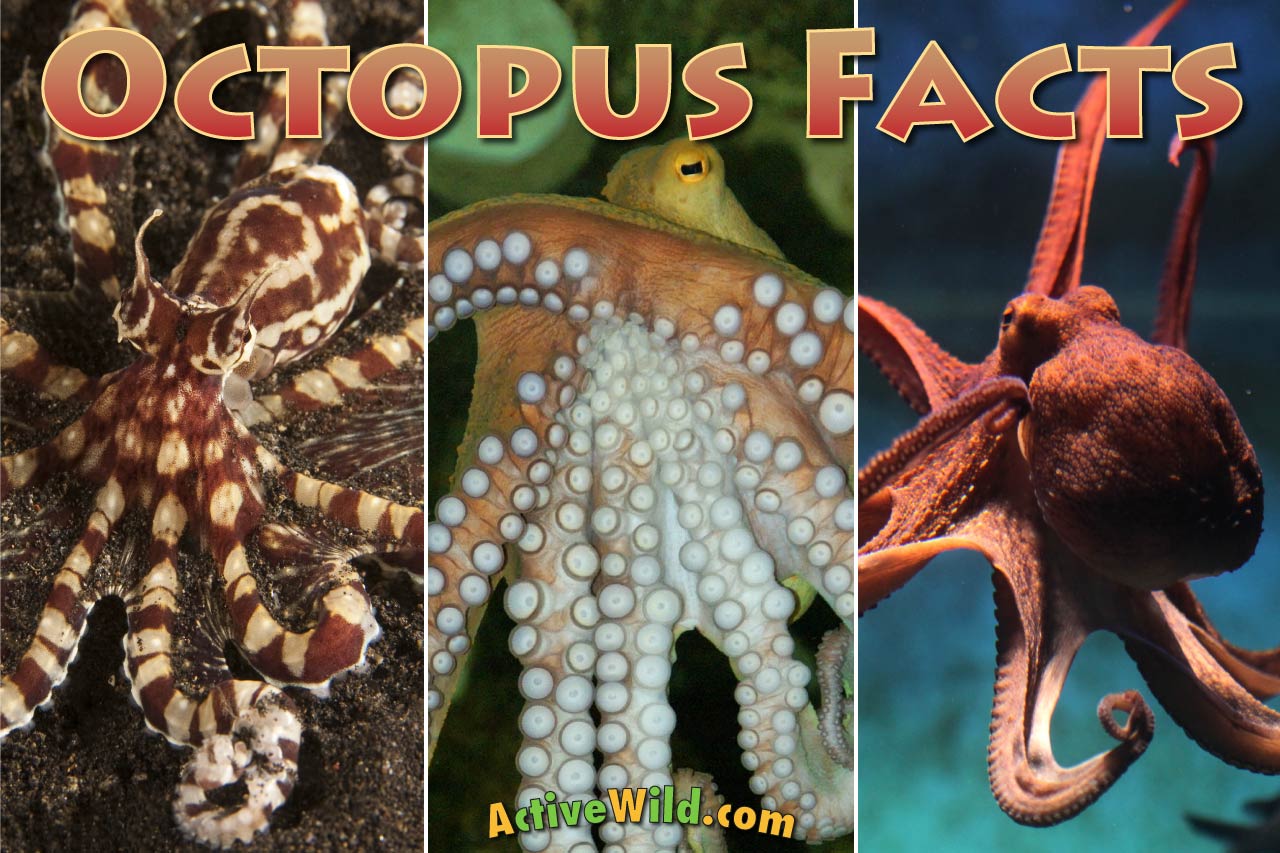 With eight legs, high intelligence, a built-in jet engine, a venomous bite, and the ability to change color at will, octopuses can seem more like creatures from outer space than inhabitants of Earth’s oceans.

Octopuses are found in all of the world’s oceans, but – apart from knowing how many legs they’ve got – most people know relatively little about these alien-looking animals. With this page we hope to change all that, so read on to become an octopus expert….

Octopuses are mollusks, and are therefore more closely related to other mollusks such as oysters and snails than they are to mammals such as man.

Along with squid, cuttlefish and nautiluses, octopuses are members of a group of mollusks known as cephalopods. Cephalopods are among the most complex and intelligent of all invertebrates. They are only found in the sea, and are unable to live in freshwater habitats.

There are around 300 species of octopus. They make up the order Octopoda.

(An ‘order’ is a group of related animals. You can find out more about animal groups such as ‘class’, ‘order’ and ‘family’ here: Animal Classification.)

Octopuses are soft-bodied animals with eight long limbs that are attached directly to the head. The inner surface of the arms is covered with round suckers. Between each arm near the body is an area of webbed skin. (The area of webbed skin is more extensive in some types of octopus than others.)

The bulbous region above an octopus’s head is known as a mantle. This muscular wall holds the octopus’s vital organs, including its three hearts. All mollusks have a mantle, although it can have different uses depending from species to species.

The octopus’s mouth has a sharp beak. The mouth is positioned at the bottom of the octopus’s head and is surrounded by the animal’s eight arms.

An octopus has one pair of large eyes. It breathes with gills which are located within a cavity in the mantle. Water reaches this cavity via a tube known as the siphon.

If the octopus needs to make a quick getaway, it contracts its mantle and shoots water through the siphon. This acts like a jet engine, propelling the octopus through the water.

Octopuses vary considerably in size. The largest octopus is the giant Pacific octopus (Enteroctopus dofleini). It has an arm span of up to 4.3 m (14 ft.), and the heaviest recorded individual weighed 71 kg (165.5 lb.).

Octopuses are able to change color at will both for camouflage and for communication. An octopus will change color to avoid detection either by predators or by potential prey.

Some male octopuses use a display color to attract females, and another color or pattern to deter rival males – sometimes at the same time, with each side of the body displaying a different color!

An octopus can change its color in under 1 second!

The order Octopoda is divided into two suborders: Incirrata and Cirrina. Most octopuses are in the suborder Incirrata.

Octopuses in the suborder Cirrina have two ear-like fins, a small internal shell, and extensive webbing between their arms. These deep sea octopuses lack the ability to move using jet propulsion, relying instead on movements of their fins or contractions of their arms and webbing. They also lack the ink sacs found in octopuses in the suborder Incirrata.

Where Do Octopuses Live?

Octopuses are found in all of the world’s oceans. They are only found in marine environments, and are unable to survive in freshwater habitats.

Octopuses occur in a wide range of marine habitats, including the ocean floor, coral reefs, the intertidal zone, and the open sea. Juvenile octopuses are often found in shallow tide pools.

Octopuses in the genus Grimpoteuthis – known as ‘Dumbo octopuses’ on behalf of their large, ear-like fins – have been recorded at depths of 7,000 m (23,000 ft.).

Octopuses are solitary creatures, spending much of their time hiding in rock crevices or burrows. Only the gloomy octopus (Octopus tetricus) has been observed living in close proximity to others of its kind.

Octopuses and cuttlefish have the highest brain-to-body weight ratio not only of all invertebrates, but also of all fish and amphibians.

The octopus’s nervous system is unusually complex. The common octopus (Octopus vulgaris) has around 500 million neurons (nerve cells) – almost as many as a dog. Most of an octopus’s neurons are located in its arms, with just one third being found in its doughnut-shaped brain.

Experiments have found that octopuses are able to recognize shapes and distinguish between sizes and colors of objects. Octopuses are capable of negotiating mazes and can learn to recognize individual humans. They’ve even been observed engaging in play-like behavior.

Octopuses can remember information that they have learned for up to four months.

Tool Use By Octopuses

Tool use has been observed in octopuses: the veined octopus (Amphioctopus marginatus) collects coconut shells and uses them to construct a shelter, while blanket octopuses (genus Tremoctopus) tear off stinging tentacles from Portuguese man-o-wars for use as weapons. Other octopus species use rocks to secure the entrance of their dens.

Octopuses have excellent vision and can also sense sound. Their sense of touch is highly acute, and chemoreceptors located in the suckers enable octopuses to ‘taste’ what they touch.

Octopuses usually use a slower form of movement that combines surface crawling and swimming. Some species can also ‘walk’ along the ocean floor on two arms.

Because octopuses are made almost entirely of soft tissue, they are able to squeeze through any opening that is larger than their hard beaks.

Most octopus species mature fast and have a lifespan of between one and two years. The deep-sea species Graneledone boreopacifica is an exception: one female of the species was observed guarding a clutch of eggs for 4.5 years. The giant Pacific octopus is also relatively long-lived, with a lifespan of up to 5 years.

During mating, the male and female’s tentacles intertwine. One of the male octopus’s arms (usually the 3rd of the octopus’s right arms) is specially modified to transfer a packet of sperm into the female’s mantle cavity. (The male’s reproductive arm is known as a hectocotylus.)

Both sexes die shortly after reproducing, and neither parent plays any part in caring for their young.

The majority of octopuses hatch in an infant form known as a paralarva. Paralarvae drift in the sea for several weeks or months before settling on the sea bed and developing into adults. Some species hatch from larger eggs as adult-like young that move straight to the bottom of the sea.

What Do Octopuses Eat?

The octopus’s high speed, acute eyesight and high intelligence have developed as a result of its predatory lifestyle.

Many octopuses use their ability to change color to conceal themselves from potential prey while hunting. Some species search for food in rock crevices, using their arms as feelers and using their webs to prevent the prey from escaping. Others make a sudden, jet-propelled lunge at their prey, which they capture with their suckers.

The octopus eats its food in the safety of its den.

Despite being highly-evolved hunters, octopuses have many predators of their own.

Octopus predators include sharks and other large fishes, seals, dolphins, seabirds, and even other octopuses.

A fleeing octopus will often emit a cloud of ink in order to confuse a predator. Some species are able to detach one of their arms, which will continue to move, distracting the predator while the octopus makes its escape.

Are Octopuses Dangerous To Humans?

Most octopus species are listed either as ‘Least Concern’ or ‘Data Deficient’ by the IUCN.