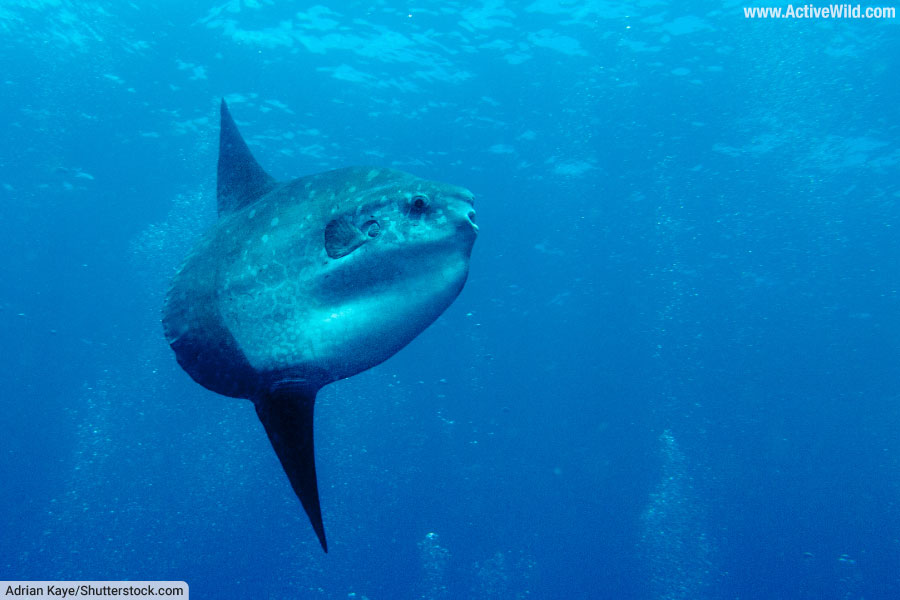 A giant sunfish discovered off the coast of Portugal’s Azores archipelago in the North Atlantic, is believed to be the world’s heaviest bony fish, weighing 2,744 kg (6049.49 lb).

(Photo above is of the closely-related ocean sunfish, Mola mola.)

The body of the huge fish was found floating near Faial Island last December. Scientists from the Atlantic Naturalist organisation were alerted, and details of its discovery were recently published in the Journal of Fish Biology. (source)

After being brought ashore, the giant sunfish, which may have been killed in a collision with a ship, was measured and weighed with the help of a forklift and a crane scale. Its stomach contents and DNA were also analysed, providing scientists with valuable information about this unusual species.

* The vast majority of fish are bony fish. Bony fish are one of two major groups of fish, the other being cartilaginous fish (more details further down the page).

You can see details of the discovery in the video below:

What Is A Giant Sunfish?

In 2018, the species was identified as being a separate species to the more widely known ocean sunfish (Mola mola).

The giant sunfish is the largest bony fish in our oceans, weighing twice as much as the ocean sunfish, which – after the two species were separated – is now considered the second heaviest bony fish species.

The giant sunfish, ocean sunfish, and three smaller sunfish – the hoodwinker sunfish, sharptial mola and slender sunfish, are the only living members of the sunfish family, Molidae.

Lacking the tails of typical fish, sunfish propel themselves through the water – at surprisingly high speeds – using these large, rudder-like fins.

Giant and ocean sunfishes are most often spotted when they are at the surface, basking on their sides as they reheat their bodies and replenish their oxygen levels after diving.

The mouths of these sunfish are small in relation to their large bodies. Their four teeth are fused together, forming into a parrot-like beak.

The giant sunfish can be distinguished from the ocean sunfish by the presence of head and chin bumps, and rectangular scales.

Surprisingly, these ocean giants start their lives as larvae that are only 5mm in length.

In 2020, scientists in Australia and New Zealand were able to genetically identify sunfish larvae for the first time using DNA analysis. (Fish larvae look nothing like their adult form, and can be extremely hard to identify.)

Adult female sunfish can carry 300 million eggs, which is more than any other known vertebrate, so it is unknown why their eggs have been so difficult to find in the wild.

In order to better protect the species, is it important to know about their whole life history, including their development from egg to larvae, juvenile, and adult.

What Is A Bony Fish?

The bony fish, or Osteichthyes, is a varied taxonomic group of fish whose skeletons are primarily made of bone.

The vast majority of fish belong to this group, which contains around 28,000 species, making it the world’s largest vertebrate group.

The other major fish group is the cartilaginous fish, Chondrichthyes, whose skeletons are made of cartilage. This group, which is home to sharks, rays and related species, contains just over a thousand species.

While the giant sunfish is the largest bony fish, it is far from the largest creature in our oceans. The largest cartilaginous fish – and the world’s largest living fish – is the whale shark, which grows up to almost 19 meters in length, and weighs up to 20 tons.

Even the whale shark (which, despite its name, is a fish, not a whale) is eclipsed in size by the blue whale. This enormous marine mammal is not only the world’s largest ocean animal, but also the world’s largest living animal and the largest animal ever to have lived.

The blue whale can reach up to 24 meters in length and weighs as much as 200 tons!

How Important Is The Giant Sunfish?

The discovery of the huge giant sunfish shows that the oceans are still healthy enough to support the largest of the world’s animals.

Sunfish play an important role in marine food webs because they forage in a variety of areas, with juveniles hunting in coastal areas and larger adults diving to deeper depths to find prey.

As sunfish primarily feed on jellyfish, they play an important part in the ecosystem by controlling jellyfish numbers and preventing blooms.

Sunfish also have huge economic importance to the tourist industry. The potential for seeing a sunfish is a major enticement for boat tours and scuba diving trips.

In areas such as the Galápagos Islands, sunfish sightings occur often enough to warrant dedicated sunfish tours, and in Bali, scuba diving to see these animals has increased in recent decades.

In 2010, scientists aboard a research vessel in the western Pacific Ocean observed a school of 57 ocean sunfish swimming at the surface aligned in the same direction.

The scientists noticed that on the skin of most of these sunfish were parasites known as Penella, which bury their heads into a fish’s tissue, leaving a trail of eggs floating behind. It was also noted that several Laysan albatrosses were nearby, and that the fish were following them as if they were trying to attract their attention.

Remarkably, an albatross was then seen removing and eating one of the parasites from a sunfish. Other albatrosses, attracted by the activity, joined in the feast.

This behavior had also been observed and photographed in 2005, when six black-footed albatrosses were seen pecking at an ocean sunfish at the surface. The parasite is the main prey of the Black-footed albatross, so it is plausible that this symbiotic relationship is actually a common occurrence. (Source)

While the discovery of the largest giant sunfish has provided scientists with an insight into the health of our oceans, it also raises some concerns.

The fish’s body had a large bruise on its head, in which there was red paint embedded – the same as that used to coat the keels of boats. It is unknown whether this injury occurred before or after death, but it serves as a reminder that increased management of shipping traffic is likely to be beneficial to the safety of large marine animals.

Large cargo ships are frequent users of the waters around islands such as the Azores, posing a huge threat to marine life through both ship strikes and pollution. Every year, around 20,000 whales, and hundreds of sea turtles, are struck by shipping vessels around the world.

Scientists still have many unanswered questions about the giant sunfish. Estimates, based on sightings by fishermen, put the species’ population at around a few thousand, but its conservation status is yet to be evaluated.

The giant sunfish has been listed as a high-risk bycatch species in Australian fisheries, and its close relative, the ocean sunfish Mola mola, is listed as vulnerable by the IUCN due to the high levels of bycatch that occur. In South Africa, an estimated 340,000 catches of Mola mola are made annually.

Although the giant sunfish is also known as the “Southern Ocean sunfish”, the species is now known to be found throughout the world’s temperate and tropical oceans. Previous misconceptions about the fish’s range, and the fact that it and the ocean sunfish were, until recently, considered to be the same species, may have led to incorrect identification in the past.

The lack of information surrounding the giant sunfish and other sunfish species leaves many unresolved questions regarding about the extent of the fish’s movements along the coast, the variation in their diet across different habitats, and the precise location and conditions of their spawning grounds.

Further research is needed to address the gaps in our knowledge and to implement effective conservation measures that will ensure that these species continue to thrive in the future.