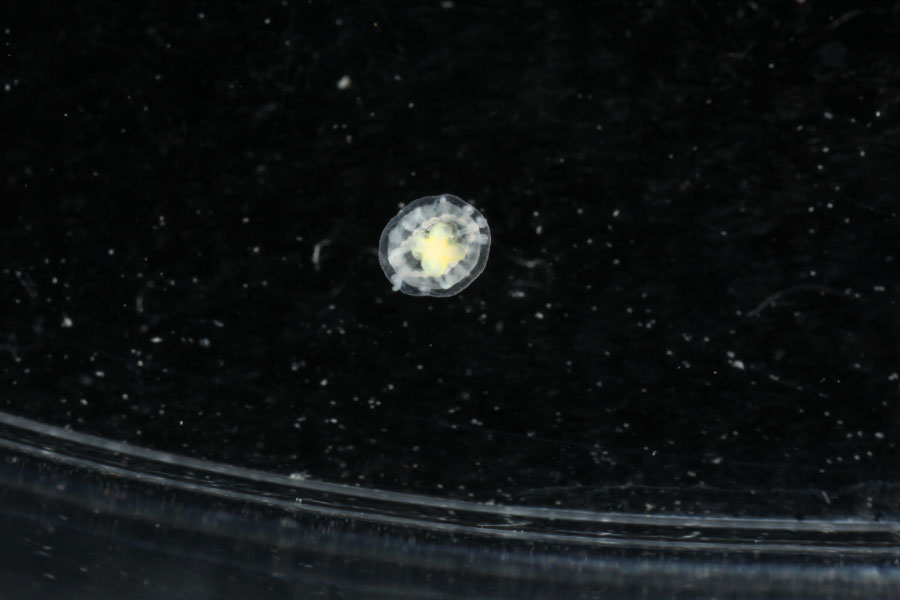 Aging affects most living organisms, with death being a universal part of life, but one jellyfish species has found an unusual way of escaping death entirely.

Turritopsis dohrnii, also known as the immortal jellyfish, has been the focus of research carried out at the University of Oveidas in Spain, as scientists mapped the species’ genetic sequence to uncover the origin of its unique ability.

The lifecycle of a jellyfish

To understand how the immortal jellyfish has managed this, we must first look at how normal jellyfish age.

All jellyfish begin their lives as larvae, drifting through the ocean before swimming down to find something to attach themselves to on the seabed. Here they form a polyp, develop a digestive system and feed on zooplankton. Their sole focus at this stage is staying alive.

Within a few days, a colony can cover a whole boat dock, before immature medusae – the typical jellyfish forms we are used to seeing in the ocean or washed up on our beaches – bud off from the polyps.

The free-swimming medusae disperse and reproduce, usually living for only a few months. This is where it ends for most jellyfish, but the immortal jellyfish can reverse this cycle.

When faced with injury, environmental stress, sickness, or old age, T. dohrnii will fall to the ocean floor and transform into a cyst, reattaching itself to the seabed and regressing into a polyp to begin the cycle once more.

How long can the immortal jellyfish live?

Hypothetically, this cycle of regeneration could repeat forever, and given that these creatures have inhabited the oceans for over 500 million years, it’s possible that a single immortal jellyfish has been alive this entire time.

However, whilst this is technically feasible, it’s unlikely to be provable as these jellyfish have only been studied for a few decades, giving scientists a limited amount of data to work with.

The jellyfish are also incredibly difficult to keep alive in captivity, with the only successful case being in Japan, where a single colony was sustained for two years. During this time, it regenerated itself a total of ten times (source).

The science behind their immortality

To reveal how the immortal jellyfish performs this incredible feat, researchers at the University of Oviedo in Spain mapped its genome and compared it to that of the crimson jellyfish (Turritopsis rubra), a close relative that is unable to regenerate.

They found that the immortal jellyfish had twice as many copies of the genes responsible for DNA repair, meaning that the jellyfish can produce larger amounts of restorative and protective proteins.

The researchers also found unique mutations that reduced cell division and prevented the ends of chromosomes, known as telomeres, from deteriorating. In humans, telomere length shortens with age, so maintaining these could be one of the keys to reducing aging (source).

Whilst the immortal jellyfish has mastered this ability, humans are a long way from any kind of real-world application for this discovery. The hope is that by studying what happens in the jellyfish and how their genes manipulate cells, we may deepen our understanding of cellular and tissue regeneration.

One day, this could have huge relevance to human aging, potentially inspiring regenerative medicine or providing insights into age-related diseases such as cancer and neurodegeneration.

The immortal jellyfish isn’t the only jellyfish to have unusual traits, and many other species have been studied for all manner of potential medical uses.

Recent research has found that venom from the Acromitus flagellates jellyfish could be used as a potential cancer therapy, as it can slow and even reverse the growth of cancer cells in the human liver and lung (source).

Another species, Aequorea victoria, possesses a green fluorescent protein (GFP) that has become the most extensively studied and widely used in medical diagnostics.

When inserted into DNA, GFP can be used as a reporter to identify which genes are being expressed (source). This method is increasingly used to study signaling pathways in cells, furthering our knowledge of how cells function and facilitating drug development (source).

GFP is also being used to study cancer, allowing the spread of cancer cells to be accurately tracked and studied within organisms (source).

Whilst the scientific benefits that these animals provide cannot be dismissed, out in the ocean, increasing numbers of jellyfish are posing a threat to humans.

In Israel, millions of jellyfish swarm around the coast every summer, clogging the filters of power stations, threatening beachgoers, and costing $10 million in lost tourism each year.

The problem isn’t restricted to Israel; with jellyfish populations rising around the globe, larger blooms are becoming more common beyond their usual habitats.

Power plants and desalination plants in numerous countries have been forced to close temporarily due to swarms of jellyfish blocking their water intakes.

In addition, every year an estimated 150 million people are stung by jellyfish, 100 of them fatally.

Why are we seeing more jellyfish blooms?

As global trade increases, so does the spread of species around the globe. Commercial ships are thought to have transported around 7,000 species to new habitats through ballast water discharge, affecting the ecological balance of native ecosystems.

The Mediterranean is the most invaded by jellyfish, as five species have now made their way up the Suez Canal from the Red Sea, resulting in much more frequent, and far larger, bloom events.

Shipping is not the sole cause of the proliferation of jellyfish. Overfishing of predators means many jellyfish populations go unchecked; warmer seas due to climate change allow jellyfish to expand their ranges; agricultural runoff has killed competing species; and the increase in plastic pollution gives jellyfish a greater chance of going undetected by predators.

Offshore wind farms and oil platforms have even been found to act as incubators for certain jellyfish species, allowing new populations to form in previously uninhabited areas (source).

What does this mean for the environment?

Jellyfish are known as “indicator species”, meaning that changes in their population signal greater changes in the wider ecosystem, with potentially catastrophic effects.

One example occurred in the Bering Sea in 1999, where a bloom of the northern sea nettle (Chrysaora melanaster) consumed around 32% of the annual zooplankton stock, whereas in non-bloom conditions, consumption was less than 1%.

Once established, jellyfish can outcompete fish populations, limiting the amount of prey available to them and potentially impacting their population numbers (source).

The decomposition of these blooms is rapid and results in a mass release of organic matter into the water column or on the seabed, feeding microbial communities and enriching the sediment.

In some cases, the additional organic matter can be too large for these communities to break down, creating low oxygen zones that are only accessible by the bacterial community. This reduces energy transfer to those higher in the food chain and results in a trophic dead end (source).

The immortal jellyfish not only defies death, but is also almost invisible. Its tiny transparent body is only 4.5 millimeters wide, smaller than your little fingernail, but if you look hard enough it can be found in temperate and tropical waters worldwide.

T. dohrnii is believed to have first appeared in the Pacific, but it has now spread across the world and branched into several populations of genetically identical jellyfish.

It is unlikely that the Jellyfish’s spread was caused by ocean currents, as the cysts from which it regenerates are found at much lower depths. For this reason, it is believed that ships transported the species around the world.

The immortal jellyfish’s regenerative abilities make it an excellent hitchhiker, as any damage sustained in transit can easily be reversed (source).

Due to its small size, the spread of the immortal jellyfish went largely unnoticed, and very little is known about its effect on the world’s oceans.

The species has not been observed causing disruption or damage through mass bloom events, but the wider impact on habitats and food chains is currently unknown.

Can the immortal jellyfish die?

Whilst immortal jellyfish can regenerate when old or injured, they are still easily killed by predators. Sea slugs feed on the polyps, and a whole range of predators rely on the medusae as part of their diet.

The jellyfish may be immortal, but it isn’t indestructible; for this reason, the species is unlikely to overpopulate Earth anytime soon.

There is much we can learn from the immortal jellyfish and its relatives, with the unusual biology of these animals opening many doors for scientific research and developments in human medicine.

However, the species’ increased presence around the world cannot be ignored, as it highlights our underestimation of the extent to which human activity has pushed our oceans out of balance.

Find out more about the world’s oceans: The Marine Biome

Find out more about the animal kingdom: Animals – The Ultimate Guide