The lion’s mane jellyfish is the world’s largest jellyfish. Not only that; the species is also one of the world’s longest animals. The largest recorded individual had tentacles measuring over 37 m (120 ft.) in length; that’s longer than a blue whale!

(The species that currently holds the record for ‘world’s longest animal’ is the bootlace worm, which is known to reach lengths of up to 55 m (180 ft.).

The lion’s mane jellyfish’s mass of thin, trailing tentacles resemble the mane of a lion, which is what gives the species its English name.

The lion’s mane jellyfish’s body, or ‘bell’, is smooth and umbrella-shaped. The lion’s mane’s bell is divided into 8 lobes. From each of these trail 70 to 150 hollow tentacles.

The tentacles are covered in stinging cells known as nematocysts. These contain structures that pierce the victim’s skin and inject it with venom. The jellyfish’s stinging tentacles are used both for defence against predators and to capture and overcome prey.

The lion’s mane jellyfish’s mouth is positioned under the bell. It is surrounded by four ‘oral arms’. These are wide, frilly appendages that trail behind the jellyfish among its tentacles. Like the tentacles, they contain stinging cells.

Individual lion’s mane jellyfish vary greatly both in size and color. Jellies found in the far northern latitudes are typically much larger than their southern counterparts. The largest individuals are often dark in color.

Typically, smaller jellies range from light orange to brown. Larger individuals may be vivid red or dark purple. The color of a juvenile’s oral arms ranges from yellow to pale pink. They darken to a deeper red or reddish brown as the jellies grow.

The lion’s mane jellyfish is known to exhibit bioluminescence (i.e. its body contains chemicals that produce their own light).

The lion’s mane jellyfish is a cold water species. It is primarily found in cool waters in the Northern Hemisphere. Regions in which it is present include: the North Sea, the Baltic Sea and the northern reaches of the Pacific and Atlantic Oceans.

The species is particularly common in the English Channel and the Irish Sea. 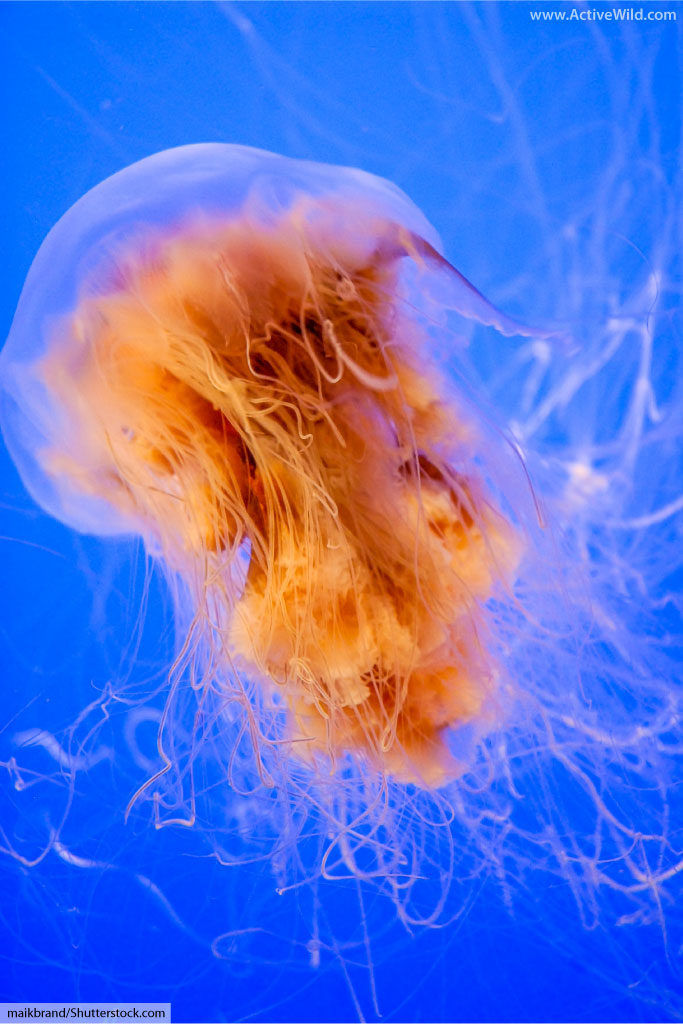 The lion’s mane jellyfish has a pelagic lifestyle (i.e. it spends a large part of its life in the open ocean).

Typically, it stays near the surface, swimming at depths of no more than 20 m (66 ft.). Individuals nearing the end of their lifespans can be found in the shallow water of sheltered bays. The polyp stage (see the life-cycle section, below) is completed in the benthic zone (i.e. on the sea bed).

The lion’s mane jellyfish is usually solitary. However, the species will occasionally form large swarms, known as blooms. A bloom may contain thousands of individuals and can be up to 1 km (0.6 mi) wide.

The lion’s mane jellyfish lacks complex organs such as a brain or eyes. Some of the lobes that comprise its bell contain odor pits and simple light receptors. These provide information about the animal’s surroundings. Special balance organs known as rhopalium help the jellyfish orient itself in the water.

The lion’s mane jellyfish is constantly on the move. It propels itself with jets of water created by the repeated contraction and opening of the bell. Aided by marine currents, the jellyfish is able to travel large distances.

Sexual reproduction occurs between March and early May. The eggs and sperm are produced in the digestive cavity of the adult jellyfish and released into the water via the mouth. The eggs are fertilized externally in the water. They are then gathered up in the female’s oral arms, where they develop into planulae.

The planula is a free-floating larva with hair-like projections on its body. It attaches itself to a suitable surface on the sea bed and develops into a polyp. The polyp has a rounded body with tentacles growing from its unattached end.

The polyp can reproduce asexually by what is known as horizontal division. The polyp develops stacks of disk-like ephyrae, which break off one by one.

During this free-swimming stage the ephyra develops into a medusa, the final stage of the jellyfish’s development.

What Do Lion’s Mane Jellyfish Eat?

The lion’s mane jellyfish feeds on zooplankton, small fish, tiny crustaceans, and other jellyfish. It hunts by spreading its tentacles to form a circular ‘net’ while sinking slowly over its prey.

Venom emitted by the jellyfish’s stinging cells stuns the prey animal, which is then pulled into the mouth. Waste matter is expelled through the same opening.

Certain species (such as the fish of the genus Caranx) are immune to the venom of the lion’s mane jellyfish and actively seek protection from their predators by swimming near the jelly’s stinging tentacles.

Leatherback sea turtles in particular are known to consume large quantities of lion’s mane jellyfish during the summer months in eastern Canada.

Is The Lion’s Mane Jellyfish Dangerous To Humans?

Contact with the lion’s mane jellyfish’s stinging tentacles is likely to result in pain, skin irritation and itching. However, the sting is unlikely to be life-threatening unless the victim experiences an allergic reaction.

Since the lion’s mane jellyfish is restricted to cold waters, it is seldom encountered by swimmers.

The jellyfish’s stinging cells remain active even after the animal has died, or if a tentacle has become unattached from the body.

Is The Lion’s Mane Jellyfish Endangered?

The lion’s mane jellyfish has not been assessed by the IUCN.

No major threats to the species have been identified. Research suggests that human activities, such as overfishing and pollution, may even be beneficial to the jellyfish as they reduce the numbers of its main predators and competitors.

Find out the difference between animal families, orders and species: Animal Classification

Discover the world’s most amazing animals: A to Z Animals