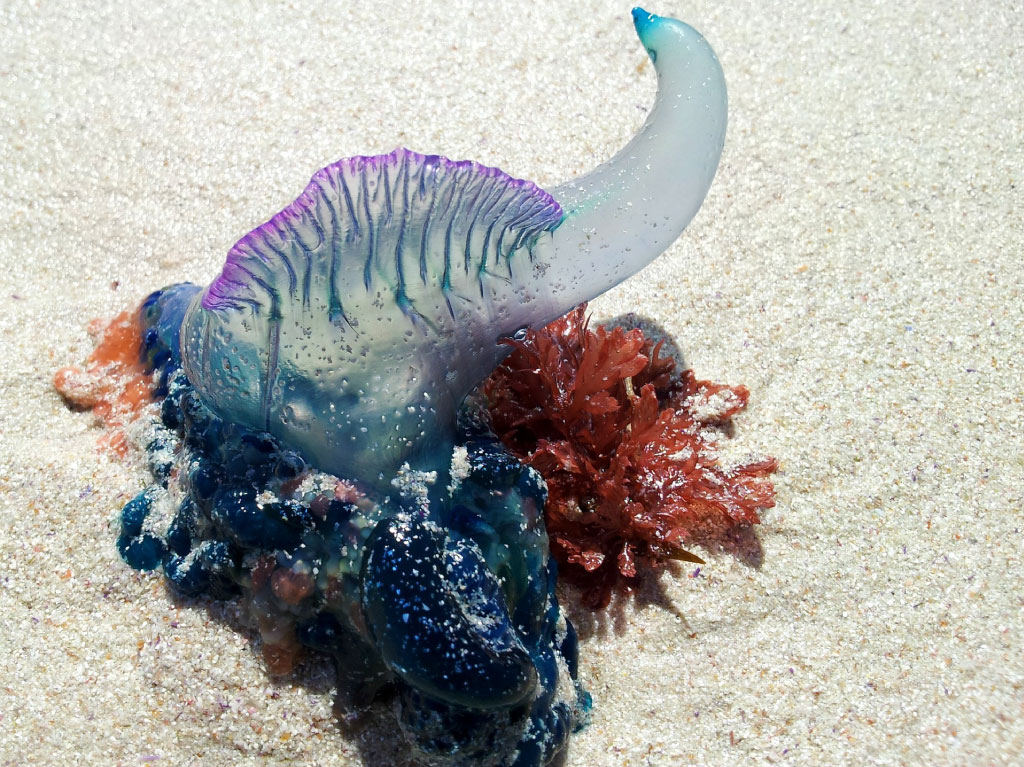 With its balloon-like body and venomous tentacles, you may be forgiven for thinking that the Portuguese man o’ war is a species of jellyfish.

In fact, the Portuguese man o’ war is not a jellyfish at all, but a siphonophore; a member of the order Siphonophorae. (You can find out what an ‘order’ is here: Animal Classification.)

Amazingly, although it looks like a single animal, like all siphonophores the Portuguese man o’ war is actually a colony of animals. The colony comprises several different types of genetically identical animals called zooids.

Each type of zooid looks different and has a different role to play in the colony. For example, some specialize in capturing prey, others specialize in reproduction. The individual zooids are reliant on the colony to survive; they cannot live independently.

The Portuguese man o’ war’s name comes from its resemblance either to the 18th-century Portuguese warships of that name, or to the helmets worn by the sailors who crewed them.

You can learn more about this fascinating animal in the video below:

What Does The Portuguese Man ‘O War Look Like?

In the picture below you can see a Portuguese man o’ war that’s been washed up onto the beach.

The main parts of the Portuguese man o’ war are the float (pneumatophore) and the submerged tentacles (cormidia).

The float is a single zooid. It takes the form of a balloon-like, gas-filled structure that rises about 15 cm (6 in) above the waterline. The float has a muscular outer case that surrounds an inner air bladder. It is topped by a sail-like crest. The float is translucent and usually has a blue, purple or pink hue.

The gastrozooids are responsible for digestion. Nutrients can be transported around the various parts of the colony.

The various members of the colony communicate with each other via nerve fibers.

The Portuguese man o’ war is unable to physically propel itself through the water. Instead, the colony is moved around by winds, ocean currents and tides.

The Portuguese man o’ war is found in warm tropical and subtropical waters. It is present in the Atlantic, Pacific and Indian Oceans as well as in the Caribbean and the Sargasso Seas.

The species has been recorded as far north as the Bay of Fundy and Cape Breton (Canada), and the Hebrides (Scotland).

The Portuguese man o’ war is typically found in the open ocean. Strong winds can occasionally push it into bays and onto beaches. Sometimes swarms occur, in which over 1,000 Portuguese men o’ war can be found floating together.

Each Portuguese man o’ war colony is either entirely male or entirely female (all the zooids in the colony are genetically identical and of the same sex). Both sexual and asexual reproduction occurs during the life cycle.

The reproductive zooids of the colony are called gonozooids. Fertilization typically occurs in fall. It takes place externally following a release of the egg and sperm cells from the gonozooids.

The fertilized egg first grows into a small swimming larva. The larva then produces clones of itself via a form of asexual reproduction known as budding. This continues until a colony is formed.

What Does The Portuguese Man ‘O War Eat?

The colony’s prey is captured by the long, ribbon-like dactylozooids. The venom of the stinging cells paralyzes the prey, which is then pulled into the multiple mouths of the colony. The individual bag-like stomachs (gastrozooids) digest the food before pushing the indigestible remains back out through the mouths.

Certain species are partially immune to the Portuguese man o’ war’s venom. They’re able to swim among its tentacles unharmed, thereby protecting themselves from other predators.

One such animal is the man o’ war fish (Nomeus gronovii). It is extremely agile, and able to swim among the tentacles without coming into contact with them.

Although the Portuguese man o’ war has few predators, some species are able to cope with the colony’s defenses. The loggerhead sea turtle (Caretta caretta) is one. It is protected from the stinging tentacles by the thick skin of its tongue and throat.

Other animals that feed on the Portuguese man o’ war include the blue sea slug (Glaucus atlanticus) and the violet snail (Janthina janthina).

Is The Portuguese Man O’ War Dangerous To Humans?

The Portuguese man o’ war’s venom is potent, and contact with its tentacles can cause severe pain and whip-like injuries. However the sting is rarely life-threatening. Only in very rare cases may the venom interfere with heart function and breathing.

The Portuguese man o’ war’s sting remains potent even in dead colonies and detached tentacles. Be careful if you see one that has been washed up onto the beach!

The Portuguese man o’ war is not rated by the IUCN. The species is not thought to be threatened.