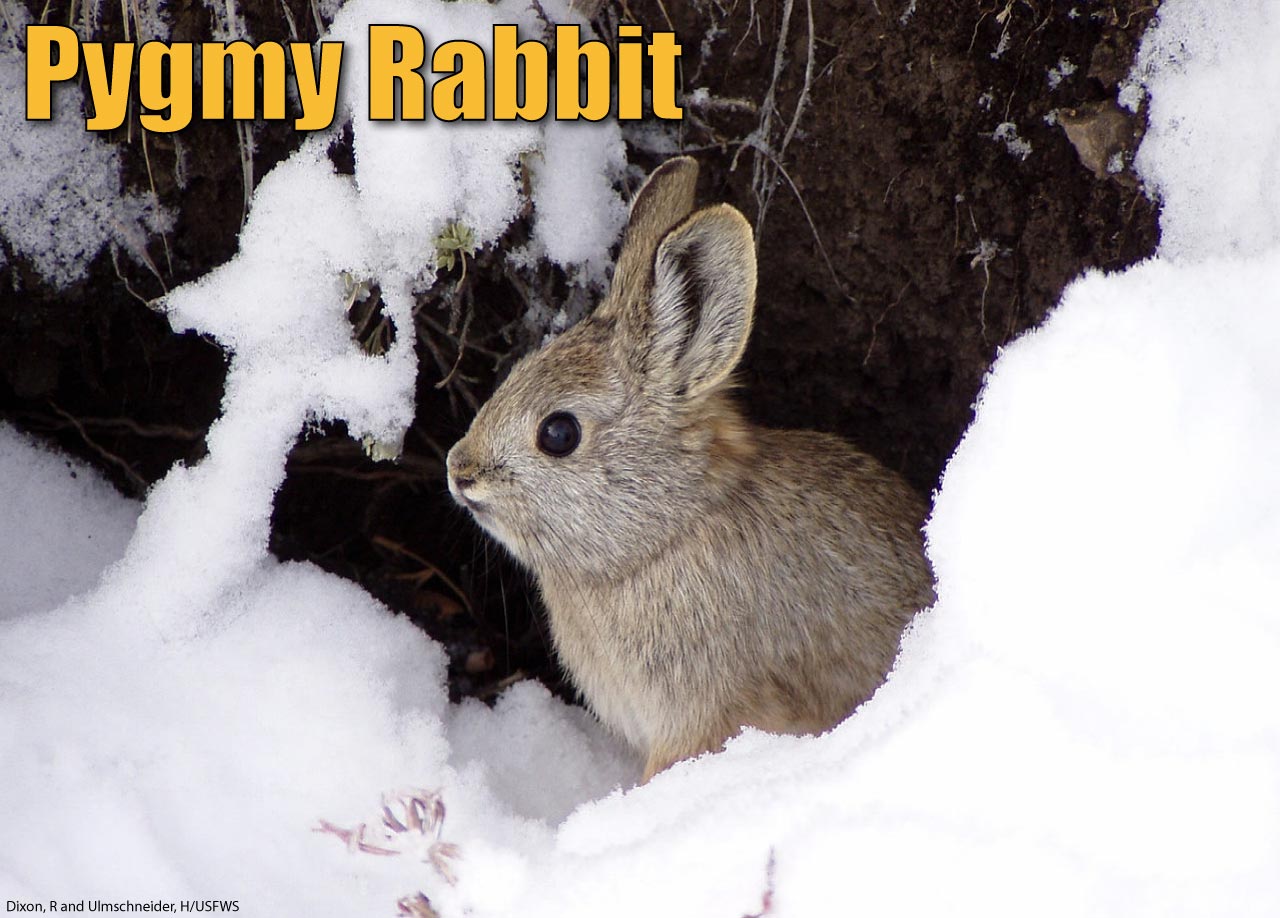 The pygmy rabbit is the smallest rabbit in the world. It’s also the only rabbit found in North America that digs burrows. On this page you’ll find pygmy rabbit facts, pictures, videos, and in-depth information.

Pygmy Rabbit Facts At A Glance

The pygmy rabbit is the world’s smallest rabbit species. This diminutive lagomorph reaches a total length of around 11.6 in. (29.5 cm); that’s around 2/3 the size of the eastern cottontail (North America’s commonest rabbit).

The pygmy rabbit is the only species in the genus Brachylagus. This classification reflects the species’ physical differences to both hares (genus Lepus) and cottontails (genus Sylvilagus).

In addition to its small size, the pygmy rabbit is distinctive in having short, round ears, and small hind legs in relation to body size.

The pygmy rabbit’s dense coat ranges in color from dark gray to brown. The ears have white margins and the tail lacks the white coloring typical in other rabbits.

In the video below, you can see a pygmy rabbit come face to face with one of its main predators: the long-tailed weasel.

Where is the Pygmy Rabbit Found:

The pygmy rabbit is native to the western United States. The species’ range covers most of the Great Basin – a large arid area of western USA – and expands into surrounding areas. Isolated populations exist in Wyoming and east-central Washington. 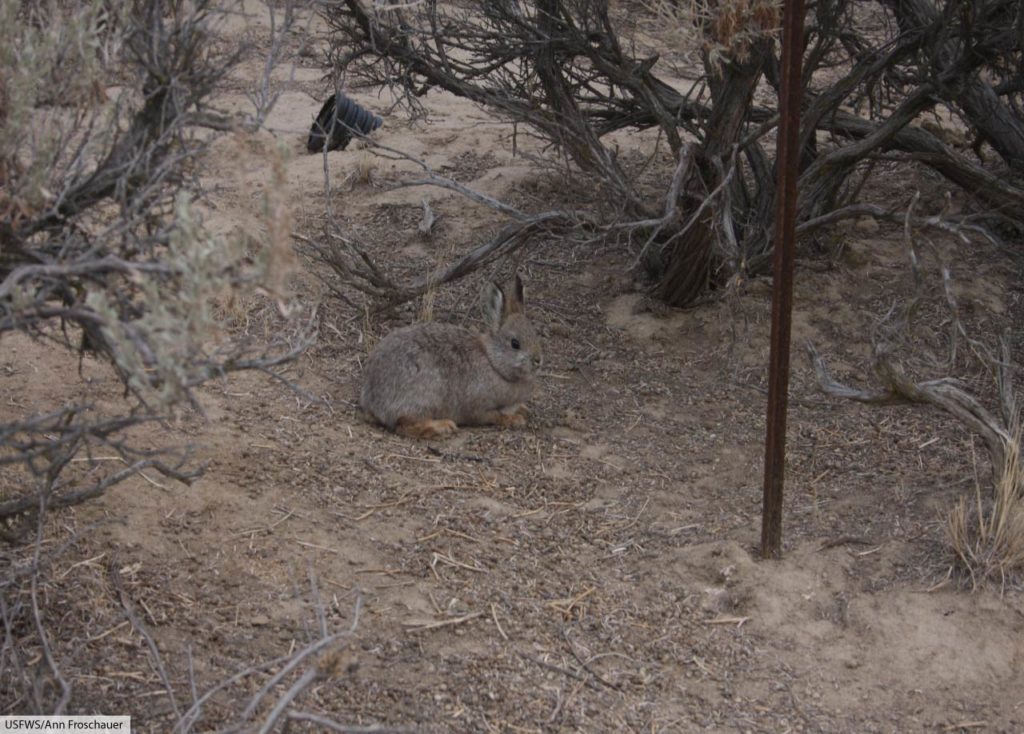 The range of the pygmy rabbit corresponds to the availability of dense sagebrush, a woody shrub found in west North America. (There are several different sagebrush species. All are in the genus Artemisia.)

The pygmy rabbit’s present range is smaller than its historical range. This reduction mirrors the disappearance of sagebrush cover over the last 3,000 years.

The pygmy rabbit is strongly associated with sagebrush. It is also found in areas dominated by other plants, such as rabbitbrush and various other brush and grass species.

The species seeks food and shelter in dense vegetation and is seldom, if ever, encountered in open areas.

The pygmy rabbit may be active at any time of day or night, but activity tends to peak at dawn and dusk. During the day, the rabbit is likely to be found resting either inside or near its burrow. Even when foraging, the pygmy rabbit typically stays within 100 m (330 ft.) of its burrow.

The pygmy rabbit is the only rabbit species in the United States known to dig its own burrow. Burrows are often found on north or east-facing slopes and have from 2 to 10 (typically 4 to 5) separate entrances. The maximum depth of a pygmy rabbit burrow is around 1 m (3.3 ft.).

If the soil is too hard or shallow for burrow construction, natural cavities or burrows made by larger animals are used by the rabbit.

The rabbit creates extensive runways through sagebrush thickets. These allow convenient travel and also serve as escape routes. During winter the rabbits make tunnels in the snow to search for food.

The species is not territorial; the size of the animal’s home range depends on the availability of food in the area.

Pygmy rabbits use a range of vocalizations to communicate. These range from squeaks to squeals. Males also use physical displays to signal dominance over their rivals.

Chemical cues may also be used by pygmy rabbits. Their role in communication is not well understood.

The pygmy rabbit tends not to leap. Usually, the animal moves around by scampering with its body close to the ground.

The mating system of pygmy rabbits is little studied. It may resemble that of cottontails. The males of this related species compete for mating rights over females. Dominant males mate with more females than subordinates.

The breeding season in Idaho takes place from March to May, while in Utah the rabbits breed between February and March. The females create separate natal burrows with a nest chamber and a single entrance.

There may be up to 3 litters in a single breeding season, with an average of 6 young per litter. The young born early in the season tend to grow larger than those born later. The species becomes sexually mature at around 1 year of age.

What Do Pygmy Rabbits Eat?

The pygmy rabbit is herbivorous, taking in most of its food by grazing. Sagebrush makes up the bulk of the rabbit’s diet. In winter, the woody shrubs account for as much as 99% of the pygmy rabbit’s food intake.

The pygmy rabbit’s diet becomes more varied during spring and summer. During this time shrubs (such as rabbitbrush and winterfat), grasses such as (Indian ricegrass and bluebunch wheatgrass), and forbs are eaten.

Predation is the leading cause of mortality for adults and juveniles alike. Up to 50% of pygmy rabbits perish during the first 5 weeks of their lives due to predation.

The rabbit’s cryptic coloration and tendency to stay hidden are its primary defensive strategies.

Is The Pygmy Rabbit Endangered?

The pygmy rabbit is rated ‘Least Concern’ by the IUCN. However, across the rabbit’s (discontinuous) range there are several isolated, genetically distinct, populations that are endangered. This includes populations in both Idaho and Washington.

Habitat loss and habitat fragmentation are the main threats to the pygmy rabbit. This is due mainly to the pygmy rabbit’s reliance on sagebrush. The conversion of wild brushland into agricultural land has a negative effect on the rabbit. Fires, and the spread of invasive weeds, also affect the rabbit’s sagebrush habitat.