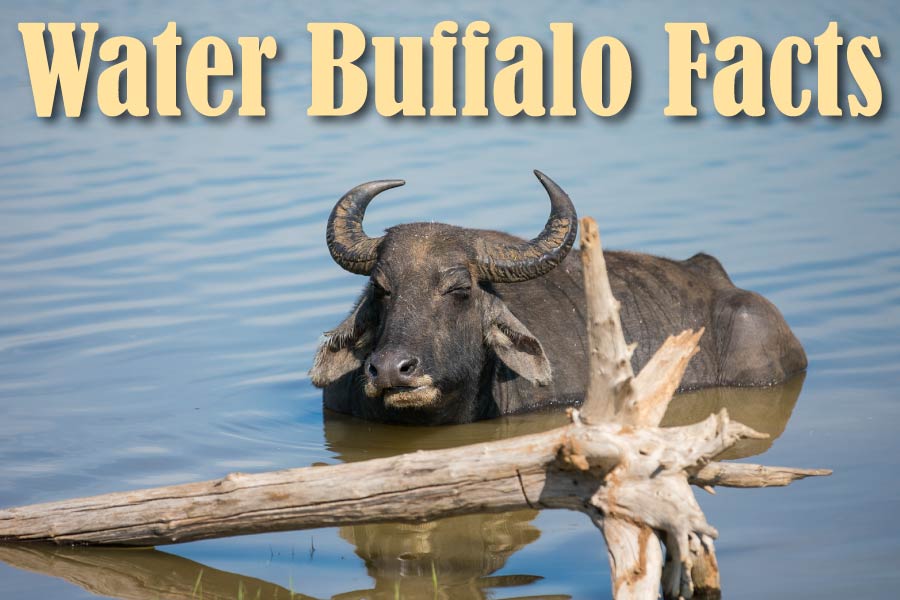 Water buffalo facts, pictures and in-depth information. Discover one of the world’s most important domesticated animals and its wild ancestor, the wild water buffalo.

The water buffalo (scientific name Bubalus bubalis) is a large, heavily-built bovid (member of the family Bovidae). It is a dark charcoal-grey and has broad, curved horns.

The water buffalo’s wild ancestors were native to southeast Asia. The species was domesticated around 5,000 years ago, and since then has been transported to many other parts of the world.

It is estimated that more people in the world depend on the water buffalo for their existence than on any other domesticated animal.

There are two distinct types of domestic water buffalo: the river buffalo, and the smaller swamp buffalo. The two are able to interbreed.

The water buffalo is believed to have descended from the wild water buffalo (scientific name Bubalus arnee). This endangered species is found in India, Thailand and Cambodia, and has a declining population that numbers fewer than 4,000 individuals.

You can find out more about the wild water buffalo further down the page.

The water buffalo is a large, sturdily-built animal that is typically a uniform dark gray in color. Its horns curve backwards and upwards in a crescent shape. The tail hangs down to the hocks (the joint around half-way down an animal’s hind leg) and has a small tuft of hair at its tip. The buffalo’s legs are thick and strong in order to support the animal’s considerable body mass.

Do Female Water Buffaloes Have Horns?

Both males and females have horns, although those of the male are proportionally larger.

The water buffalo has black / dark-colored skin and a sparse coat, both of which may be adaptations for living in a hot climate.

The species spends much of its time either immersed in water or wallowing in mud. This behavior both lowers the animal’s body temperature and protects it from biting insects.

The cloven hooves of a water buffalo are particularly widely splayed. This helps to prevent the animal from sinking into the mud when walking in marshy, wet environments.

The water buffalo is a member of the family Bovidae. This family, which also includes sheep, cows, goats, antelopes, bison and muskoxen, is part of the order Artiodactyla: the even toed ungulates.

All male bovids, and the females of many species (including the water buffalo), have horns.

A bovid’s horns are bony protrusions that are covered by a sheath of keratin (the same material out of which our hair and fingernails are made). The horns are unbranched and are never shed, continuing to grow throughout the animal’s lifetime.

Also in the order Artiodactyla is the family Cervidae – the deer family. Deer possess antlers, rather than horns. Unlike horns, antlers are branched, and are shed each year.

A close relative of the water buffalo is the African buffalo, Syncerus caffer, which occurs in the wild in sub-Saharan Africa.

Male African buffaloes have impressive horns that are fused at the base by a bony structure known as a boss, which covers most of the top of the animal’s head.

The wild water buffalo is larger and heavier than its domesticated relative, and is one of the heaviest living wild bovids. The horns of large males can reach an impressive 79 in (2 m) in length when measured along the outer edges. They are the largest horns of any living bovid species.

Wild water buffaloes live close to waterways and marshes, where they graze the grasses and browse on the leaves of herbs and small bushes. Threats to the species include: the destruction of watery habitats; hunting; and interbreeding with domesticated water buffaloes.

When Was The Water Buffalo Domesticated?

This suggests that the original range of wild water buffaloes is likely to have included a large part of southeast Asia.

Where Is The Water Buffalo Found?

The Indian subcontinent is home to around 100 million water buffaloes; over 50% of the species’ total population. Most water buffaloes in this region are of the river buffalo variety.

China is home to the world’s second largest water buffalo population, with around 25 million of the animals living in the region. Most are swamp buffaloes.

Water buffaloes are kept both for meat and dairy production, and have been transported from Asia to many other parts of the world for this reason.

In South America, water buffaloes were introduced into the Amazon floodplains. Today, approximately 2 million individuals are found in the region.

The water buffalo, as its name suggests, is often found in or near water.

The river buffalo likes deep water, into which it will immerse itself during the heat of the day. The species has even been known to dive under the water to reach plants to eat.

Swamp buffaloes prefer wallowing holes, where they coat themselves in mud to stay cool.

Both types of water buffalo graze on grasses found in wetland areas and will also browse on the leaves of low vegetation.

At other times, males are found in all-male herds known as bachelor herds. Very old males are often solitary, making them a target for tigers.

Female buffaloes breed every second year and have a gestation period of about 10 months, after which a single calf is born.

The water buffalo is a long-lived animal, with a lifespan of up to 40 years.

Since its domestication 5,000 years ago, the water buffalo has had a close relationship with humans.

Buffalo milk is richer than cow milk in protein, fat, calcium and phosphorus. It is used to make many products, including butter, ghee and cheese.

In India, river buffaloes have been bred selectively as milk producers. 22 breeds are currently recognized.

The different breeds are adapted to different environmental conditions and production requirements.

Buffalo meat is also eaten as a source of protein.

Swamp buffaloes have been selectively bred to be draught animals, as their milk production is not as efficient as that of river buffaloes. These sturdy, strong animals are used in a variety of ways, including pulling ploughs in muddy rice paddies, tilling fields, and transporting people and goods

Water buffaloes are such important livestock animals that much research has been done into breeding the best and strongest individuals. In the Philippines and India, scientists have even succeeded in cloning water buffaloes.

For many people in southeast Asia, the family water buffalo is a loved and prized possession. It provides milk to supplement the family’s diet and is used in the fields. It is fed, groomed and taken to the river to be washed and treated as a member of the family.