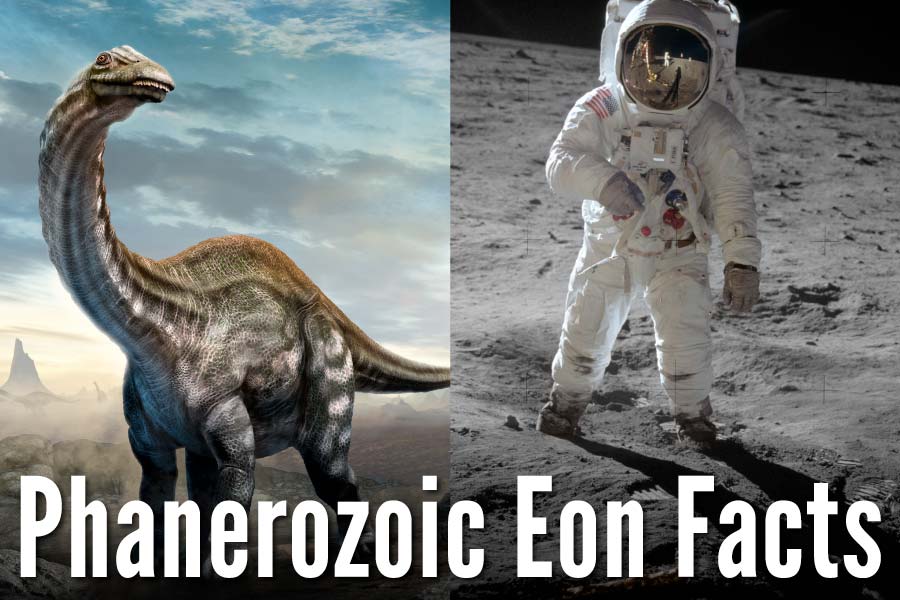 What Is The Phanerozoic Eon?

The Phanerozoic Eon is the current eon in the geologic time scale. It began around 541 million years ago (mya), and encompasses Earth’s history from then to the present day. It represents around 12% of Earth’s total history. Preceding the Phanerozoic Eon was the Proterozoic Eon.

The Phanerozoic Eon began with an event known as the Cambrian Explosion, in which many new types of complex multicellular organisms rapidly evolved.

During the Phanerozoic Eon, complex multicellular organisms first appeared; a vast supercontinent known as Pangea formed and subsequently split up into the continents that we know today; plants and animals emerged from the sea and began to live on land; the dinosaurs came and went; Earth was shaken by three mass extinction events; and an intelligent primate species began to explore the universe.

Eras Of The Phanerozoic Eon:

Periods of the Paleozoic Era

At the end of the Precambrian, life on Earth consisted of single celled organisms and simple, small, soft-bodied multicellular organisms.

During the Cambrian Period – the first period both of the Paleozoic Era and the Phanerozoic Eon – life on Earth underwent a sudden diversification in an event known as the “Cambrian Explosion”.

During the Cambrian Explosion, many new types of organism appeared, including most of today’s major animal phyla, including Arthropoda (arthropods), Brachiopoda (brachiopods), and Chordata (chordates).

The fossil record of the Cambrian Period is dominated by arthropods with hard exoskeletons, such as trilobites, as well as snails and marine worms.

All the animals and plants of the early Paleozoic Era lived in the sea; there was no life on the land.

In subsequent periods of the Paleozoic Era, invertebrates such as octopuses, shelled mollusks, corals and starfish evolved, along with the first fish, amphibians and reptiles.

By about 430 mya, during the Silurian Period, the first plants and animals moved onto land and became established. Insects, arachnids and centipedes also evolved around this time.

During the Paleozoic Era, around 335 mya, smaller landmasses joined to form a single supercontinent, Pangaea. Pangaea was surrounded by a superocean called Panthalassa.

The end of the Paleozoic Era was marked by the Permian–Triassic Extinction Event, also known as “The Great Dying”. During this time, 95% of all species became extinct, making it the worst extinction event that has ever befallen Earth.

Although the exact cause of the Permian–Triassic Extinction Event is not known, it may have been triggered by volcanic activity in the Siberian Traps region of Russia.

Periods of the Mesozoic Era

The Mesozoic Era began 252 million years ago and lasted for almost 200 million years. This era is known as the “Age Of Reptiles” due to the dominance of this group of animals not only on land, in the shape of the dinosaurs, but also in the oceans and skies.

The Mesozoic Era is divided into three periods; the Triassic, Jurassic and Cretaceous.

At the start of the Mesozoic Era, Earth had just experienced a mass extinction of staggering proportions and few species are found in the fossil record from this time.

After about 5 million years, species diversity in the seas and on land had largely recovered. Warm conditions led to a boom in reptilian evolution and in the late Triassic Period the first true dinosaurs appeared.

A mass extinction event between the Triassic and Jurassic Periods killed off many of the dinosaurs’ reptilian rivals, allowing the dinosaurs to become the dominant land animals in the Jurassic and Cretaceous Periods.

During the Jurassic Period, the seas were dominated by plesiosaurs, ichthyosaurs and ammonites, while on land the dinosaurs flourished. Huge herds of herbivorous sauropods, such as Brachiosaurus and Diplodocus, roamed the lush forests and plains. The first crocodiles evolved at this time, as did the very earliest birds.

Towards the close of the Mesozoic Era, Earth experienced a cooling trend and tropical vegetation and habitats became confined to equatorial regions.

The supercontinent Pangea broke up into two smaller supercontinents, Gondwana and Laurasia, during the Jurassic Period. These landmasses continued to divide, and in the Cretaceous Period the continents began to take their current positions.

During the Cretaceous Period dinosaur diversity reached its peak. The first flowering plants evolved at this time, along with marsupials and early mammals.

Around 66 million years ago, the Cretaceous Period – and the Mesozoic Era – was brought to a close with a mass extinction event. The Cretaceous-Paleogene Extinction Event killed off the dinosaurs (those that hadn’t evolved in birds) and many other animal groups.

It is estimated that 75% of all living species on Earth became extinct during the Cretaceous-Paleogene Extinction Event. Every living creature with a body mass of over 10 kg died out and the age of the dinosaurs came to an end.

The Cretaceous-Paleogene Extinction Event is thought to have been caused by a meteor strike. There is strong evidence that the Chicxulub Crater in Mexico marks the spot of impact.

Periods of the Cenozoic Era

The Cenozoic is the era in which we currently live. It was preceded by the Cretaceous-Paleogene Extinction Event of 66 mya.

The extinction of the large dinosaurs allowed birds, marsupials and mammals to diversify and fill the habitats left vacant by the dinosaurs. The mammals of the Mesozoic Ear had been small and nocturnal. During the Paleogene mammals began to be active during the day, and increased in size and diversity. Sharks, giant crocodiles and snakes became the dominant predators.

Flowering plants also diversified and spread into new habitats. In the early part of this era, there was global warming and the forests spread out to reach the poles.

The continents continued to take their modern shapes. During this era, movement of the continents caused collisions and most of the Earth’s highest mountain ranges were pushed up as a consequence.

In the middle of the Cenozoic Era, ocean currents were disturbed, leading to a period of global cooling. The forests shrank down to equatorial latitudes again and new grasses evolved. This led to the evolution of many new forms of herbivorous mammals that made use of this resource. Thirty species of apes evolved during this time, including Australopithecus, a hominin that is thought to be ancestral to modern humans.

During the most recent times, modern species of fauna and flora have evolved and the Earth’s climate has experienced several ice ages. Homo sapiens evolved during these conditions and has, in the last 70,000 years, spread out to populate all continents of the Earth.

In 1977, Voyager 1 left Earth. It would become the first spacecraft to leave the Solar System, and remains the most distant man-made object from Earth.