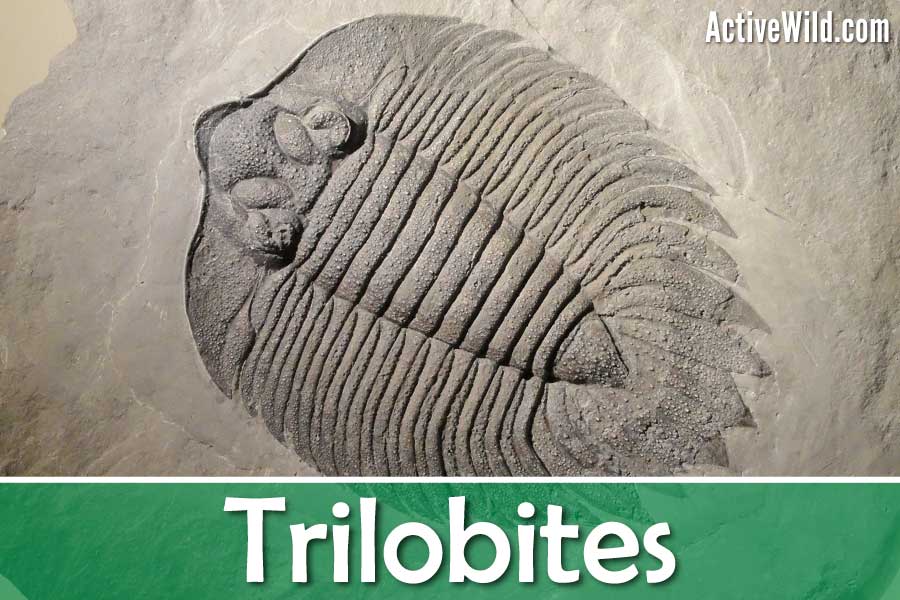 Trilobite facts, pictures and in-depth information: discover a group of ancient arthropods that inhabited Earth hundreds of millions of years before the dinosaurs!

The answers to all of the questions can be found on this page.

Trilobites are a diverse group of prehistoric marine invertebrate animals that first appeared around 521 mya (million years ago), during the Cambrian Period of the Paleozoic Era.

Trilobites are among the most successful early multicellular animals and were present on Earth for over 250 million years (that’s many millions of years longer than the non-avian dinosaurs existed).

During this time, trilobites evolved a great variety of body shapes and sizes, spread around the world, and adapted to a wide range of marine habitats.

Around 250 mya, at the end of the Permian period, the last of the trilobites became extinct, leaving not a single direct descendant.

Trilobites are an extinct group of arthropods that inhabited the oceans during the Paleozoic Era. Like all arthropods, trilobites were invertebrates (animals with no backbones) with hard exoskeletons, segmented bodies and paired, jointed legs.

(An arthropod is a member of a vast group (called Arthropoda) of invertebrate animals. Examples of arthropods include animals such as insects, crustaceans, arachnids and centipedes.)

A hard, calcified exoskeleton is useful for protection and locomotion, but its great disadvantage is that it allows the animal no space to grow. For this reason, all arthropods (including trilobites) have to shed their exoskeletons at regular intervals.

Prior to shedding, a new exoskeleton will grow under the old one. This is initially soft, but will harden once the old exoskeleton has been shed.

Today, fossils of discarded trilobite exoskeletons give us fascinating insights into the lives of these remarkable animals.

FUN TRILOBITE FACT: When a trilobite molted, its exoskeleton probably split open at the cephalon (head). The animal then climbed out of its old skin through the hole. This may explain why so many fragments of trilobite cephalons are found in the fossil record.

Three different types of fossils have been associated with trilobites.

The majority of examples are cast fossils that formed when a molted exoskeleton left a hollow impression in newly-formed rock. This hollow was filled up with sediment or minerals that later turned to rock. The fossil therefore represents an impression of the inside of the animal’s exoskeleton.

Body fossils involve the mineralization (turning to rock) of either the whole body or parts of it. Trilobite body fossils are rare, but when they are found, they show details about the soft body parts, such as gills, antennae and legs. Beautifully preserved body fossils have been found in the Burgess Shale in the Canadian Rocky Mountains.

There are also many trace fossils associated with trilobites. These show fossilized evidence of trilobite activity, such as footprints or the marks made where a trilobite shuffled its cephalon through the sediment while feeding on detritus.

A trilobite’s body was flattened and divided into three major sections: a cephalon (head) with eyes, mouthparts and antennae; a thorax (mid-section) consisting of numerous articulating segments; and a pygidium (tail) that was made up of fused segments.

Spines commonly protruded from the head and body; today these are used to distinguish different species.

The axial lobe is in the center; the pleural lobes lie to each side. The three-lobed appearance is a characteristic of all trilobites.

Fossils of the ventral surface (undersides) of trilobites are comparatively rare. Those that have been found reveal that trilobites were multi-legged animals, with three pairs under the cephalon, and a further pair on each segment of the thorax and tail.

At the base of each leg was a feathery gill, used for absorbing oxygen from the surrounding water.

FUN TRILOBITE FACT: Trilobite fossils were a source of confusion for early naturalists. Some were identified as being fossilized flatfish; others were thought to be fossilized butterflies from the time of Merlin, the legendary Welsh magician. The trilobite genus Merlinia is named after the wizard, who was often portrayed surrounded by butterflies.

When Did Trilobites First Appear?

Trilobites first appear in the fossil record around 521 mya, during the early Cambrian period.

By that time trilobites had already gained their characteristic body form, as well as complex eyes and calcified exoskeletons. They had diversified to fill different ecological niches and were the most advanced forms of life on earth at that time.

The ancestors of the first trilobites were likely more primitive organisms that lived in Precambrian times. These ancestors lacked exoskeletons and their soft bodies did not often fossilize.

Thousands of trilobite species have been identified, all of which lived in the ocean.

Most trilobites inhabited shallow waters, where they scurried along the sand or mud on the sea bed. Trilobites also adapted to other lifestyles, including free swimming in ocean currents, crawling around in deep, dark waters, burrowing into sediment, and living on rocky reefs.

Most trilobites had well-developed eyes; those of some species were huge, while those of others were positioned on mobile stalks. This indicates that trilobites were likely hunters reliant on sight to ambush and capture their prey.

Some trilobites lacked eyes entirely. Such species likely fed on detritus found in the darkness of the ocean floor, or were burrowers who had no need for eyes.

FUN TRILOBITE FACT: Trilobites were not the first animals to develop eyes, but they certainly had the most complex eyes at the time. Most species had a pair of compound eyes, made of many small units, each with lenses made of calcite crystals.

It is certain that trilobites were themselves prey for predatory invertebrates in the Cambrian seas. Their spines and hard exoskeletons probably acted as protection from predators. Many trilobite species could roll up into a ball, much as an armadillo does.

Where Were Trilobites Found?

It is thought that the earliest trilobites evolved in what is now Siberia, but was then a separate continent that lay in the southern hemisphere.

The oldest trilobite fossils have been found in Siberia, North America, Morocco and Spain. Each of these four localities was a center for trilobite evolution, in which new species and genera arose.

Shortly after trilobites first appeared in the early Cambrian period, they began to diversify, adapt, speciate and proliferate. This gave rise to the great wealth of fossil species that are recognized today.

Trilobites dispersed to oceans all over the world and their fossils are found on every continent.

FUN TRILOBITE FACT: Over 20,000 different trilobite species have been described, making trilobites the most diverse group of extinct animals in the fossil record.

When Did Trilobites Become Extinct?

Trilobites were the dominant marine animals for much of the Cambrian Period.

Trilobites became the dominant ocean life forms shortly after their appearance around 521 mya. The greatest diversity of trilobites is found in the fossil record from around 500 mya.

Their dominance continued for millions of years up until the end of the Cambrian Period, 485.4 mya. By this time, trilobites had radiated into many niches and dispersed throughout the world.

However, the start of the Ordovician Period saw the beginning of a decline in the diversity of trilobites. They went through several extinction events and became less common in the seas.

By the end of the Carboniferous period 300 mya, only one or two trilobite orders remained, and species diversity was low. Fossils from these times are very rare.

During this time, 80% of marine species, including the last of the trilobites, died out. Analysis suggests that the Permian-Triassic Extinction Event was caused by increased levels of CO2 and more acidic oceans.

FUN TRILOBITE FACT: Trilobites existed in the world’s oceans for almost 300 million years. This long history makes them the most successful animals in the history of our planet.

Geologists use trilobite fossils as index fossils – fossils that can be used to date other rocks, and other fossils in those rocks.

Geologists also use trilobite fossils to calculate the historic position and movement of continents.

For example, fossils of the trilobite Petigurus have been found both in northwest Scotland and in North America. Since this species has not been found anywhere else in Britain, scientists infer that, 500 million years ago, Scotland was closer to North America than it was to the rest of Britain.

Did Trilobites Leave Any Descendants?

The trilobites left no direct descendants. After almost 300 million years of survival, adaptation and evolution, their branch on the tree of life led to a dead end.

The closest living relatives (but not direct descendants) of trilobites are the chelicerates (a group of arthropods that contains animals such as horseshoe crabs, sea spiders, and arachnids (spiders, scorpions, etc.).

Yes, after a decline in the number and diversity of trilobites that began in the Ordovician Period, the last trilobites became extinct in the Permian-Triassic Extinction Event that occurred around 251 million ears ago.

Some enthusiasts hope that, one day, living trilobites might perhaps be discovered crawling around in the deepest, darkest habitats of unexplored oceans.