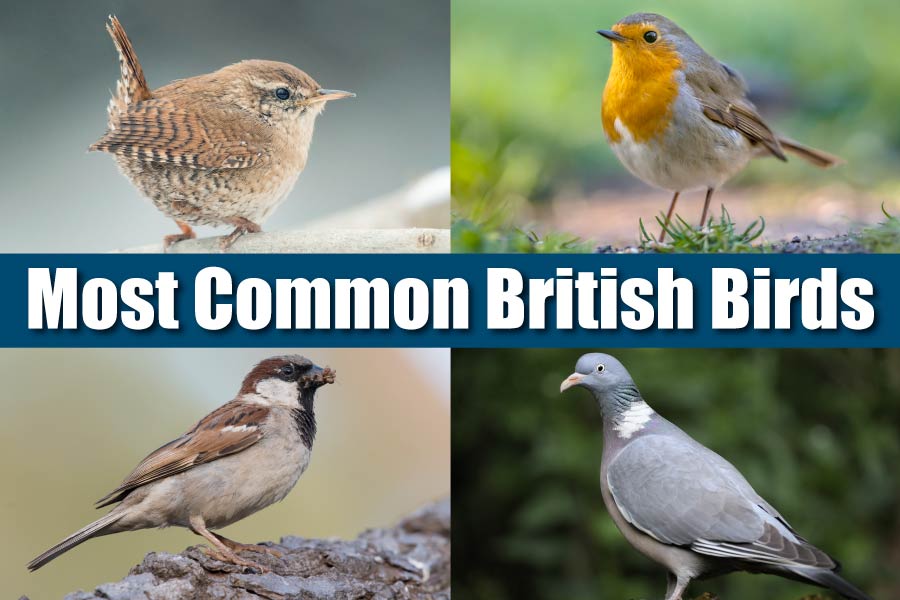 A list of the most common British birds, with pictures and identification tips.

What Are The Most Common British Birds?

The top 20 most common British birds contains a number of less familiar species, such as willow warbler, chiffchaff, blackcap and woodcock. Although less commonly seen in gardens, these species are present in large numbers in the UK for at least part of the year.

Below is a list of the twenty most common birds in the UK, with population size, pictures and identification tips for each species. Details of the data used to compile this list can be found at the bottom of this page. 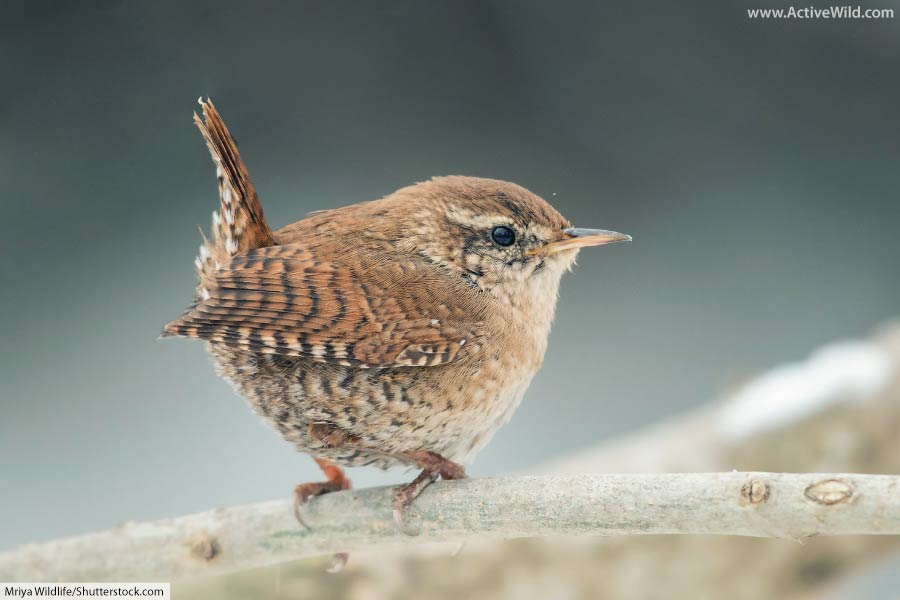 The wren is the most common British bird. Due to its small size (the wren is the third-smallest British bird, after the firecrest and goldcrest) and drab plumage, the wren is seen less often than larger or more colourful species such as robins, blackbirds and wood pigeons. However, once you know how to recognise it, you’ll see this little bird in most British gardens and woodlands. 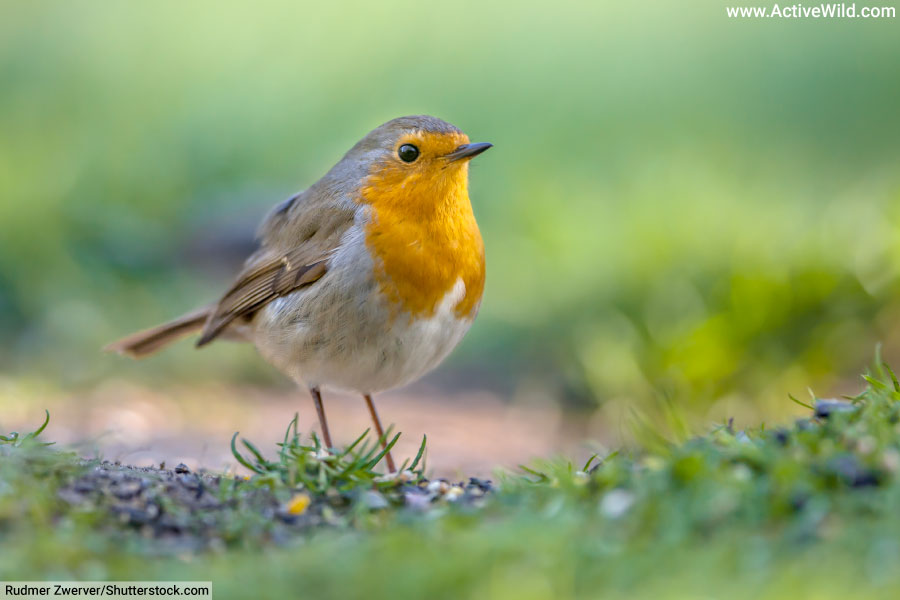 With its bright red chest, the robin is a bird that most people will have no trouble identifying. This much-loved visitor to British gardens is also found in woodlands and hedgerows throughout the UK.

Unlike several other common birds, the robin remains active and visible throughout the year. You’ll often hear its melodic, somewhat melancholy song in the depths of winter.

In built-up areas, the robin sometimes even sings at night!

It may be the third most common British bird, but the house sparrow is in trouble. The species’ UK conservation status is “Red”, due to a severe population decline that started in the 70’s.

Despite this decline, the house sparrow is still present in most UK towns and cities. Colonies of sparrows can be identified by their characteristic “chirp” calls, which can often be heard emanating from hedges and bushes in gardens and parks.

The plumage of male house sparrows is a mixture of chestnut brown, dark grey and light grey. That of the female is more subdued. 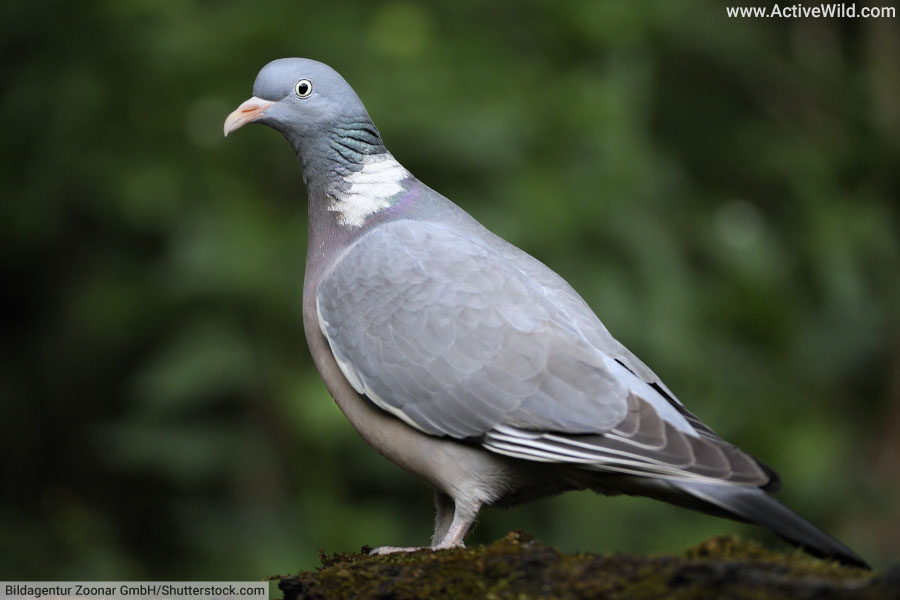 The woodpigeon is easily distinguished from other British pigeons and doves both by its characteristic white neck stripe, and by the white stripes on its wings when in flight. This large bird can be seen in gardens, parks and woodlands in most parts of the UK.

Male black birds are black, with orange-yellow bills and a thin yellow ring around each eye. Females are grey-brown, with streaked chests.

The blackbird is larger than sparrows and tits, but smaller than black-coloured members of the crow family, such as carrion crows and jackdaws. The only bird with which it might be confused is the starling, which is also black, but which has numerous white spots and reddish legs (a blackbird’s legs are dark grey / brown).

The blackbird is known for its melodic song and frantic alarm call.

As with many bird species, the plumage of the male chaffinch is significantly more colourful than that of the female. The male chaffinch has a deep red chest, grey head, and brown / black wings. The female has a pinkish-brown chest and brown head and back. The wings of both sexes have white patches.

Like most finches, the chaffinch has a strong, cone-shaped bill for eating seeds.

The chaffinch is found in most parts of the UK all year round. It is a common sight in gardens, woodlands and many other habitats. 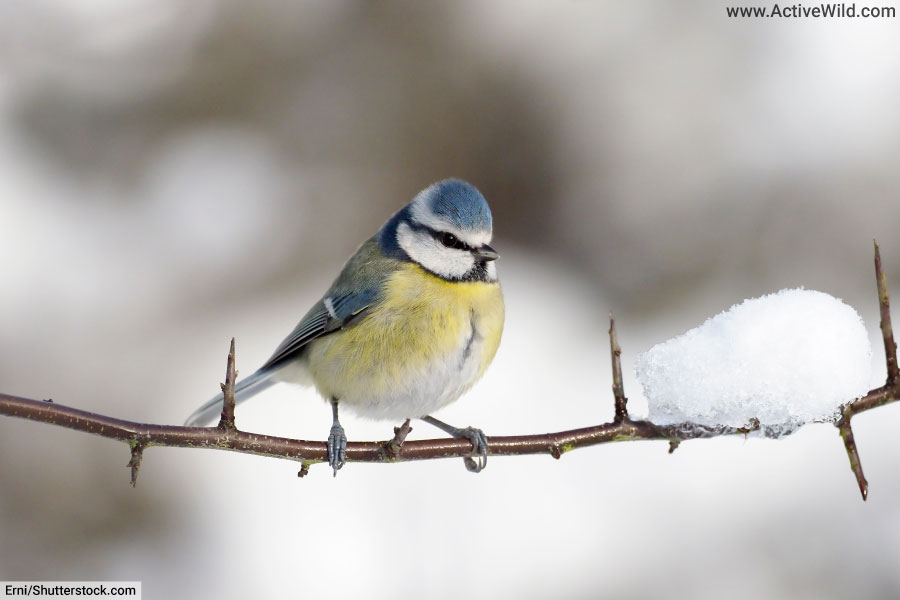 With its blue, yellow and white plumage, the blue tit is easily identified. Look out for its black, bandit-style eye mask and blue cap, which distinguish it from the larger great tit.

The blue tit is the most common tit in the UK. It is a regular on British bird tables, and is also found in woodlands.

During the winter, the blue tit can be found in mixed flocks with other tits (and other types of small bird). 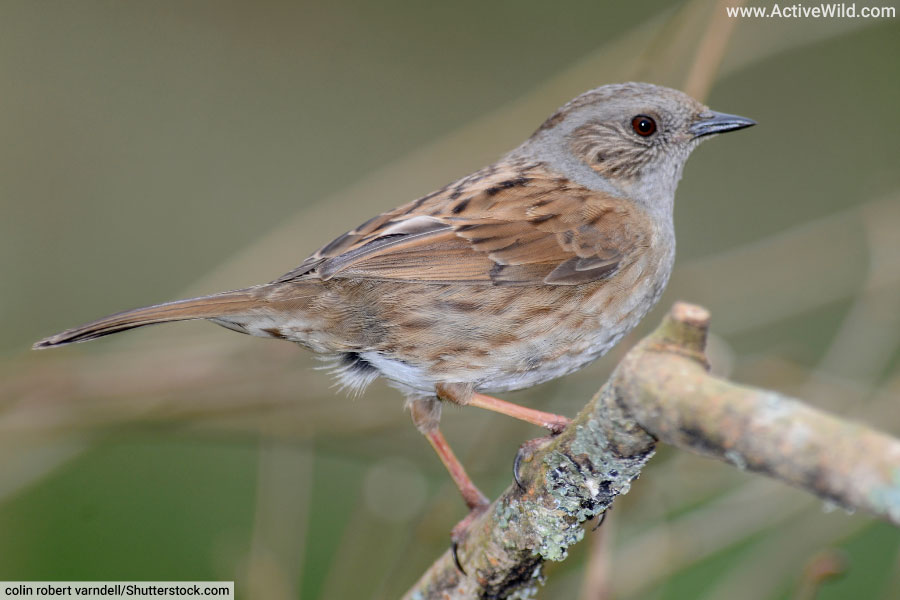 Despite being known as the “hedge sparrow”, the dunnock belongs to the family Prunellidae rather than the family Passeridae, to which the house sparrow and the other “true” sparrows belong.

The dunnock is similar in size and colour to a house sparrow. Look out for its thin bill, grey chest and grey head. Unlike the house sparrow, the dunnock isn’t usually seen in large groups. 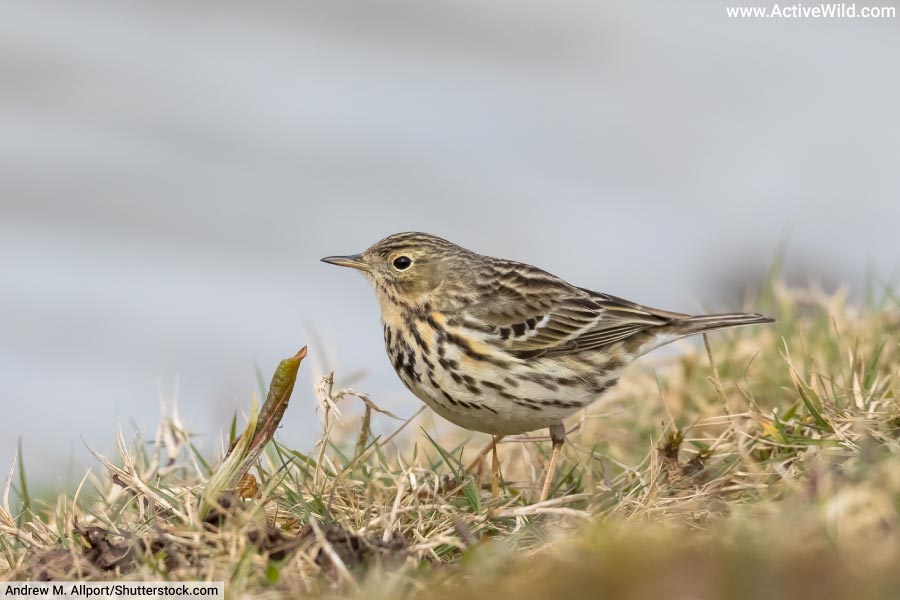 The meadow pipit, unlike many other common British birds, is not often seen in gardens. Instead, it is a bird of grasslands, heaths and moors. It is sparrow-sized, with a slender bill, streaky chest, and brown wings. It is often seen on the ground, or perched on posts and fences.

Distinguishing features of the great tit include a black head, white cheeks, yellow chest divided by a black line (which is thicker in males than in females), and green-grey wings. It is noticeably larger than the blue tit.

The great tit is a woodland bird, but is also a common visitor to British gardens. It is usually seen in pairs, but during the winter will form larger flocks with other tits.

Although three species of pheasant are found in the UK, if you see a large, long-tailed bird that prefers walking to flying then it’s almost certainly a common pheasant (which is so common it’s usually just called a “pheasant”).

The other two pheasants found in the UK – the golden pheasant and Lady Amherst’s pheasant – are extremely rare and only found in small, localised areas.

All three pheasants are non-native, having been introduced from Asia. 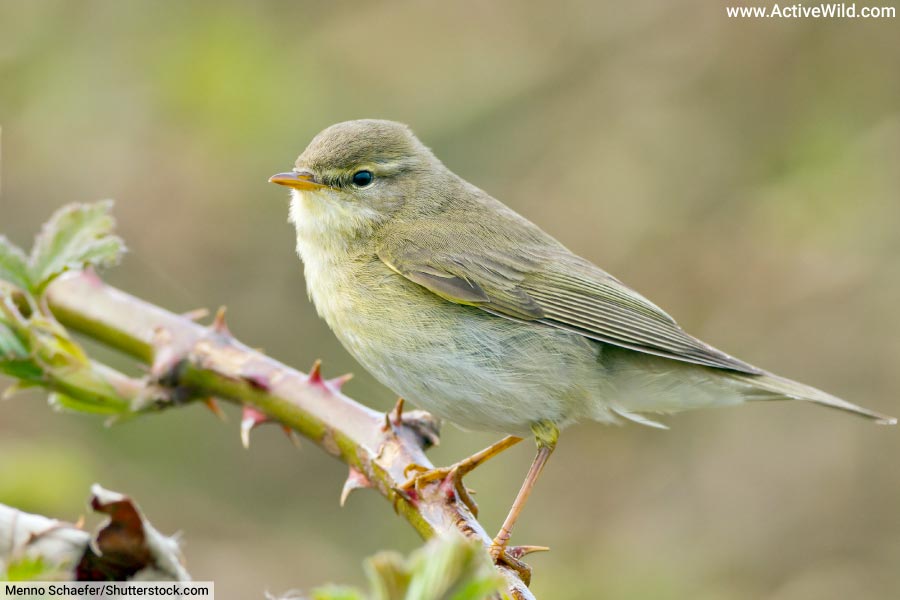 Over two million willow warblers can be found in the UK in the summer. These migratory birds spend the winter in tropical Africa.

The willow warbler is a small, pale olive-green-brown bird, with a faint pale supercilium (eye-stripe). It is a member of the genus Phylloscopus, a group of birds are known as “leaf warblers”.

There are over 60 leaf warbler species, many of which have a very similar appearance. Often the best way to differentiate these birds is by listening to their songs.

British birders have a particularly hard time distinguishing the willow warbler from the chiffchaff, unless the song of these similar-looking birds can be heard. The willow warbler has a soft, descending song, whereas that of the chiffchaff sounds like its name – a rhythmic “chiff-chaff”, which is usually repeated many times.

The black-headed gull is significantly smaller than the herring gull. In the summer the species is easy to identify due to its relatively small size and black head. During the winter the head is white with small black patches above and behind the eyes; the only signs of the head’s summer appearance.

There are two other smallish gulls whose heads are black in the summer: Bonaparte’s gull, which is smaller than the black-headed gull, and the Mediterranean gull, whose wings, unlike those of the black headed gull, lack black markings.

Bonaparte’s gull is a North American species, and extremely rare in Britain; the Mediterranean gull is also comparatively scarce compared to the black-headed gull. So, if you see a gull with a black head during the summer, it’s probably a (real) black-headed gull! 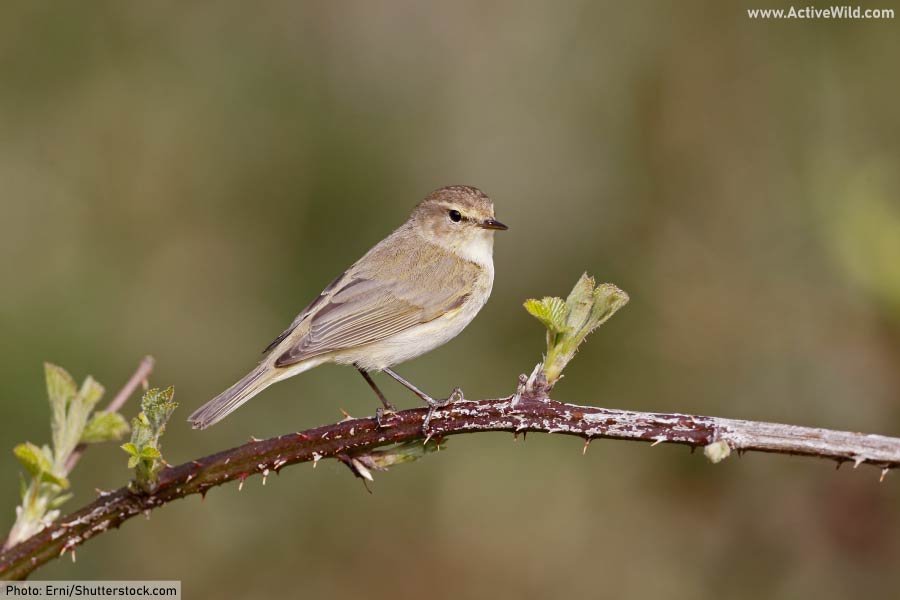 Like the closely-related, and very similar-looking willow warbler, the chiffchaff is a leaf warbler of genus Phylloscopus. Luckily the chiffchaff has a very distinctive song – a rhythmic “chiff-chaff” after which the species was named – from which it can be identified. This song is a welcome sign that spring has arrived.

In the spring and summer, the chiffchaff can be seen flitting out of trees and bushes, and even briefly hovering, as it captures passing insects. 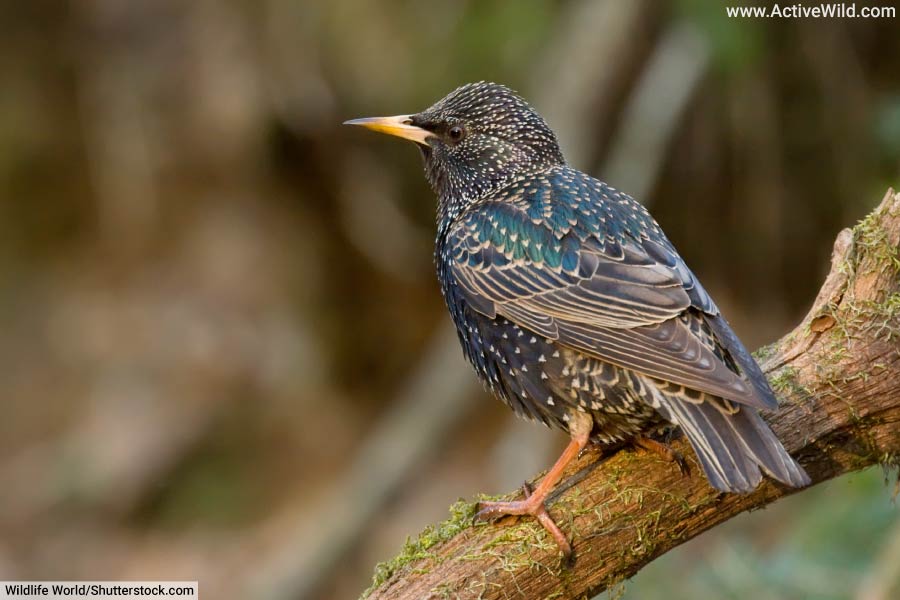 The starling is a mid-sized, black bird that is often seen in flocks. It is found in farmland, towns and villages. Unlike the completely black plumage of the blackbird, that of the starling is marked with many white spots, and if seen in the right light, has an iridescent green and purple sheen. During the breeding season, the starling’s bill is yellow; at other times of the year, it is dark. Its legs are red-brown.

During the winter, starlings congregate in large numbers. Just before dusk, huge flocks of starlings form moving clouds known as murmurations. A large murmuration of starlings is one of Britain’s most impressive natural phenomena.

The starling, despite being one of Britain’s most common birds, has a UK Conservation Status of Red. This is due to a significant population decline in recent years.

Unlike some warblers, the blackcap is relatively easy to identify due to its distinctive “cap”, which in males is black and in females chestnut brown. The chest is pale grey; the wings and back dark grey-brown.

The blackcap may be seen in rural gardens, but is more often seen in farmland and woodlands. The species is known as the “Northern Nightingale” due to its melodic fluting song. Its call is a harsh click.

There is a year-round blackcap population in the UK, which in the spring and summer is boosted by visitors from Europe. 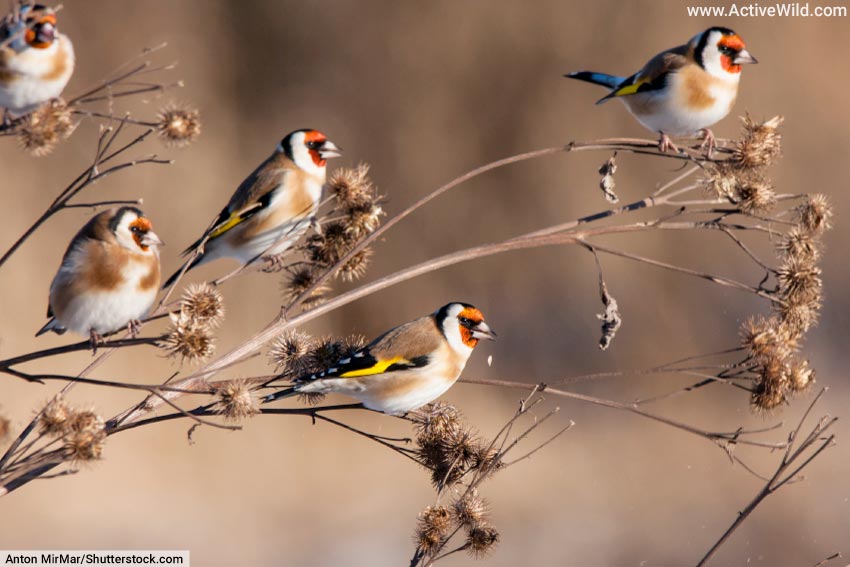 With its bright red face and golden wing bars, the goldfinch is one of Britain’s most striking birds. Resident birds are joined by summer visitors from Europe, and at the end of the breeding season, goldfinches often form small flocks.

The goldfinch is found in woodland and scrubland, and will also venture into gardens. 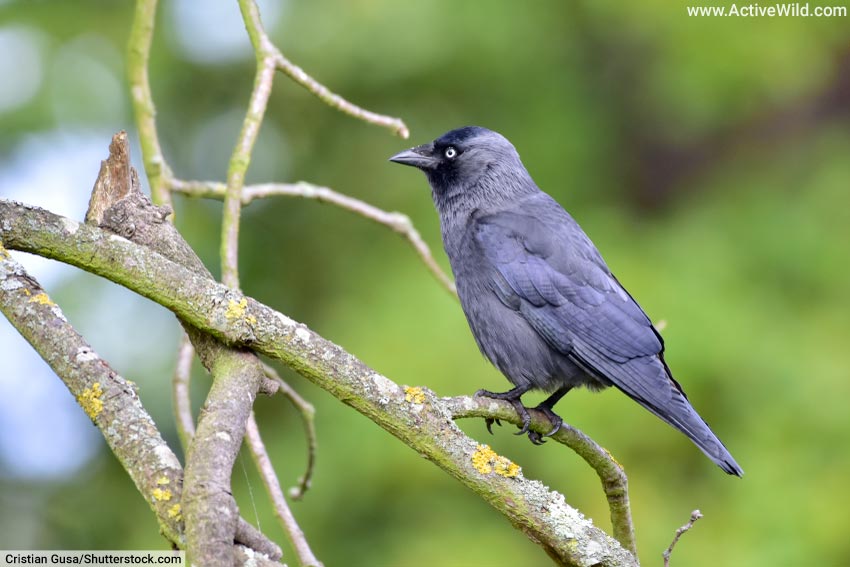 The jackdaw is the most common member of the crow family, Corvidae, found in Britain. Its plumage is dark slate-grey, with lighter grey around the head. The species can be recognised by its monosyllabic “Jack” call, after which some say it is named.

Jackdaws often nest in chimneys. They mate for life, and in the spring and summer are often seen in pairs. During the autumn they join larger flocks. 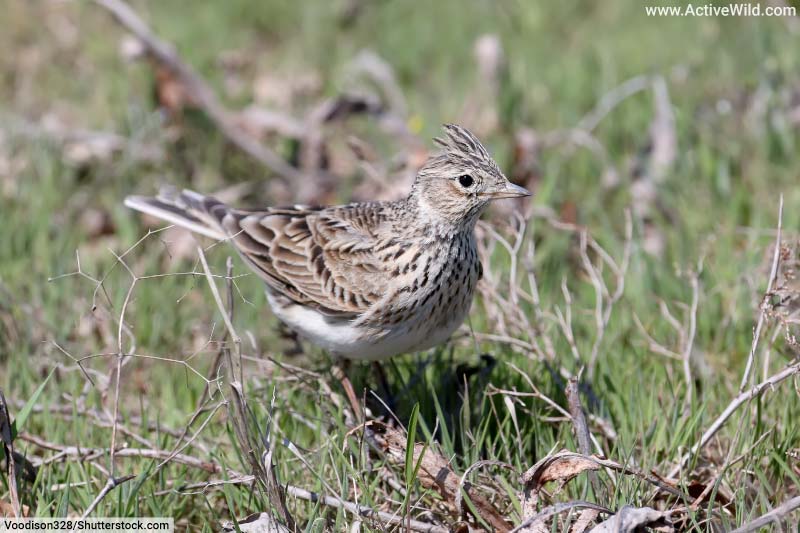 One of the best-loved sounds of the British summer is the incessant, melodic warbling of a male skylark. While making its characteristic song flight, the bird will hover in one spot 50 to 100 metres in the air, and is often only visible as a small dot against the sky.

The skylark has a streaked chest, white undersides, and patterned brown wings and back. 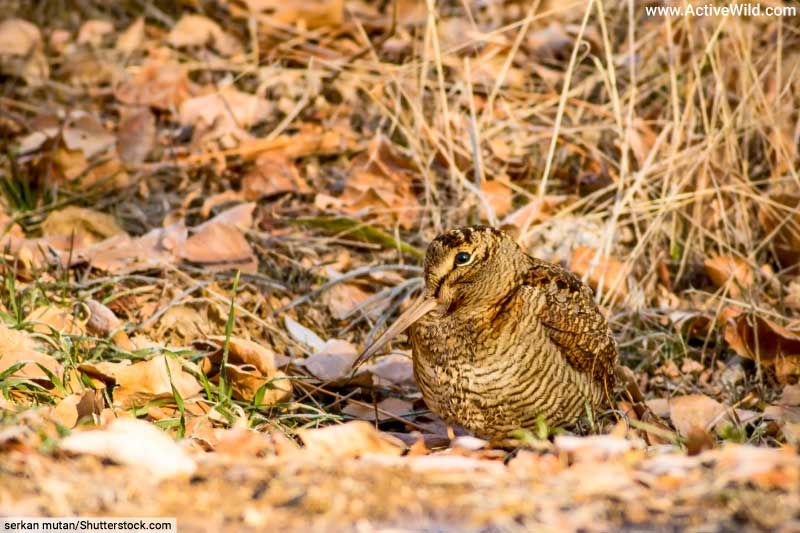 Despite being one of the most common British birds, the woodcock is rarely seen. This is mainly due to its nocturnal lifestyle and excellent camouflage during the day. The best time to see a woodcock is at dusk during the summer, when males can be seen making fast display flights over woodlands – a behaviour known as “roding”.

Despite being a wader, the woodcock is usually found in woodlands or on fields near woodlands. A breeding population is present in the UK all year round, but the species’ UK population is boosted considerably during the winter by visitors from Northern Europe.

Data used to compile this list is from the BTO‘s Population estimates of birds in Great Britain and the United Kingdom paper. (Source)