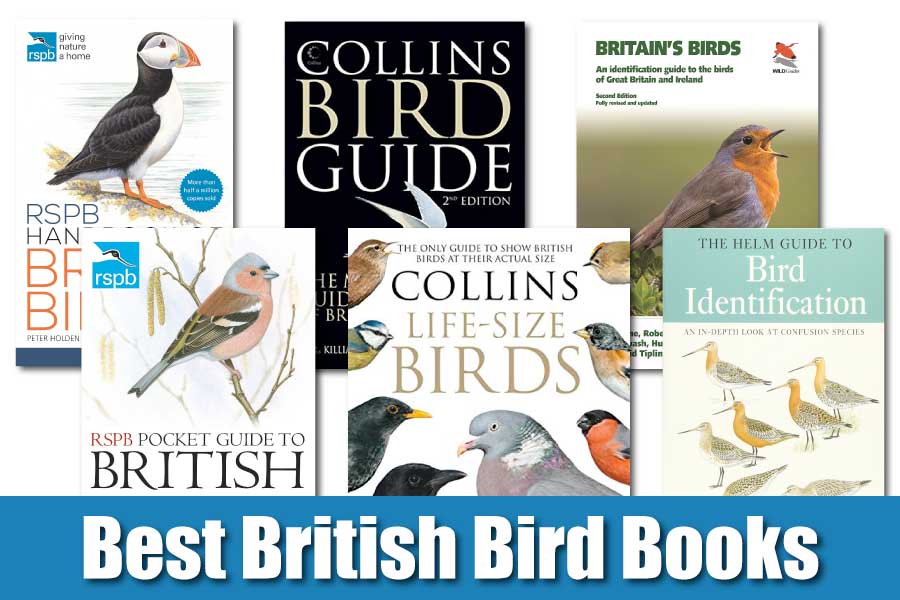 A round-up of the best British bird books for 2022. Find out which guide will be accompanying us on our birding trips this year…

What is the best British bird book?

Several publications compete for the title ‘best British bird book’; Collins Bird Guide is the preferred choice of many birders, but may be over-comprehensive for some; the RSPB Handbook of British Birds, which features only birds seen in Britain, is another favourite; and for those who prefer photos to illustrations, Britain’s Birds: An Identification Guide to the Birds of Great Britain & Ireland is an excellent choice.

Collins Bird Guide has been our go-to bird book for many years. The book is subtitled “The Most Complete Guide to the Birds of Britain and Europe”, and it’s hard to argue with that statement; the book covers a vast number of British and European species.

The large amount of information contained within the book is both well presented and easily accessible. We like the way that the text descriptions and illustrations (both of which are excellent) are kept on separate sides of each two-page spread. In other bird books the text is interspersed with illustrations, which may look pretty, but in our experience isn’t as practical.

Collins Bird Guide may be a tad too comprehensive for a beginner birder who is only interested in identifying British species. Many of the birds covered in the Collins are not present in Britain, so unless you’re planning a European bird trip or have an interest in foreign species, then you may want to look elsewhere; either Britain’s Birds or the RSPB Handbook of British Birds would fit the bill.

The text and maps in the Collins Bird Guide are about as small as they could be while still remaining useable, which is something you may want to bear in mind if your eyes aren’t as hawk-like as they once were.

Collins Bird Guide is currently in its second edition, which was first published in 2009. Although the book was refreshed in 2015, a third edition would now be welcome.

Those minor criticisms aside, if you want a truly comprehensive bird book that covers British and European species, then the Collins should be top of your shopping list!

The RSPB Handbook of British Birds contains information on over 300 species that can be seen in Britain.

Now in its 5th edition, which was published in January 2021, the RSPB Handbook of British Birds is currently the most up to date of the popular British bird guides. Bird classification changes surprisingly quickly, so getting a current guide is always a good move.

The RSPB Handbook only covers bird species seen in Britain, which is definitely a plus for someone just getting into birding; the Collins can seem a bit overwhelming!

The RSPB guide is a similar size to the Collins, yet covers only British species, meaning that there is more space for information on each species. As well as identification tips, you’ll also find facts on population, nesting season, brood size, and lifespan; all useful for building up a picture of a bird’s lifestyle.

To our eyes the interior design of the RSPB guide isn’t quite as pleasing as the Collins, although this is a personal view. The book is also slightly larger than the Collins (but not as thick), making it slightly less practical in the field. (Both the Collins and the RSPB guide will likely live in your backpack rather than in your pocket.)

With over half a million copies having been sold, the RSPB guide is one of the most popular British bird books, and deservedly so.

If you prefer illustrations to photos, and want a bird guide that covers only British species, then the RSPB Handbook of British Birds would be an excellent choice.

Britain’s Birds: An Identification Guide to the Birds of Great Britain and Ireland

Unlike both Collins Bird Guide and the RSPB Handbook of British Birds, Britain’s Birds, published by Princeton University Press, contains photos rather than illustrations.

There are pros and cons to this approach: a good photograph is often the best way to identify a bird, but not always; illustrations often subtly highlight certain aspects of a bird’s appearance, which is useful in differentiating two very similar species in the field.

That said, the photos in Britain’s Birds are consistently excellent and you really are given a good idea of what a bird looks like in ‘real life’.

The information on each species isn’t quite as thorough as that in the RSPB Handbook, but the identification tips are extremely good. That, combined with the high quality of the photos, means Britain’s Birds will prove highly useful both in the field and at home as you study in readiness for your next birding adventure.

Britain’s Birds, together with a good pocket guide, such as the RSPB Pocket Guide to British Birds, below, would be all you needed to hit your local nature reserve!

The RSPB Pocket Guide to British Birds may be small, but it’s packed with high-quality illustrations and useful text. The current edition includes 215 species, which means that all of the birds you’re likely to see in Britain (until you become a true twitcher, that is) are covered.

Despite being pocket-sized, the book is surprisingly thorough. Multiple illustrations of each bird are provided, together with a map and clear identification information.

It’s hard to imagine how the presentation could be improved; we’ve rarely found this little book to be lacking in the information required to make successful identification in the field.

Our copy is battered and wrinkled from being taken on countless birding expeditions. If you want a concise pocket guide to British birds, or perhaps want to introduce a friend or young relative to the hobby, then the RSPB Pocket Guide to British Birds should be high on your list.

Collins Life-Size Birds: The Only Guide to Show British Birds at their Actual Size

Collins Life-Size Birds is definitely not a field guide; this large, hardback book will live on your coffee table or bookshelf rather than in your backpack.

The selling point of this book is that the photos of the birds are printed at life size. At first, we thought that this was a bit of a gimmick, but in actual fact the large photos are very helpful in giving the reader an idea of what the bird is like in ‘real life’. For larger birds that don’t fit on the pages, photos of parts of the bird are included (as well as smaller photos of the whole bird).

With a bookcase already straining under the weight of bird books, we were hesitant to get this book. However, we’re glad we did – there isn’t much else like Collins Life-Size Birds on the market, and the wonderful photos, helpful text, and beautiful design make leafing through its pages a pleasure.

Collins Life-Size Birds would be an ideal gift for someone just getting into bird watching.

The Helm Guide to Bird Identification

Time spent studying problem species in the field, especially under the guiding hand of an expert, is without doubt the best way to come to grips with tricky species, but not everyone has this opportunity.

That’s where a book such as the Helm Guide to Bird Identification comes in. It concentrates on problematic birds, and, with its detailed illustrations and useful text, explains how to distinguish birds that at first glance appear to be identical to their close relatives.

We own an earlier hardback edition of this book; it’s a shame that the current version is only available in paperback.

Because the Helm Guide features only ‘confusion’ species, it’s not an ideal book for the beginner. However, for someone who wants to take their bird identification to the next level, it’s the ideal reference book.

We hope that you’ve found this round-up of the best British bird books useful; any of the top three books on this page will serve as an excellent companion on your birding adventures. The RSPB pocket guide would be a good choice if you just want a bird book to slip into your pocket, and the Helm guide is a useful book for more experienced birders.