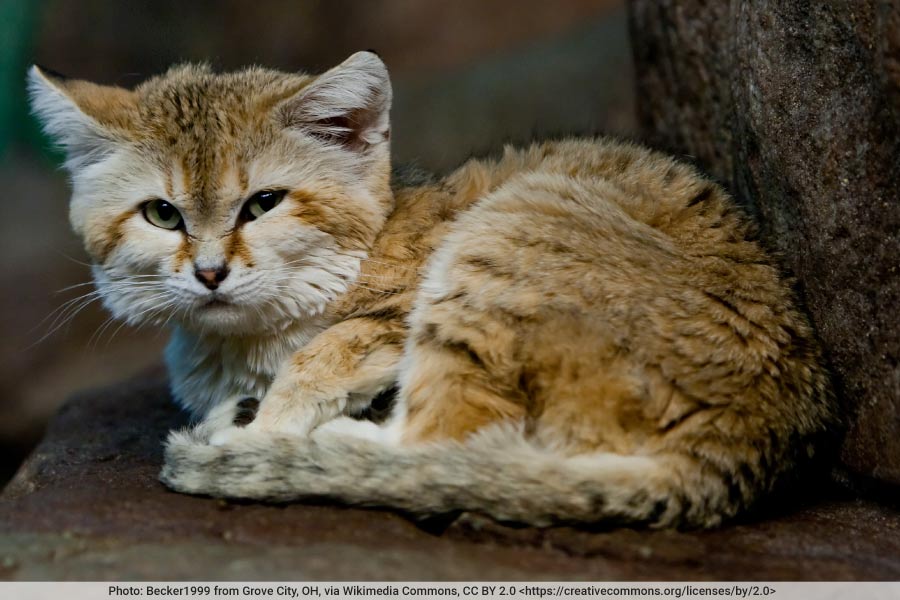 The sand cat, Felis margarita, is the only wild cat that lives primarily in desert habitats. It is found in arid regions with sparse vegetation in North Africa, the Middle East and parts of Central Asia. Slightly smaller than a domestic cat, the sand cat has several adaptations for living in the desert, including furry paws, large ears and a thick, sand-colored coat.

Sand cats are opportunistic feeders and hunt a variety of prey animals, including venomous vipers.

Read on for the complete lowdown on this remarkable felid…

The sand cat has a thick, reddish-brown or sandy-gray coat with pale undersides. There are black stripes on its back, legs, and tail. It has a broad head and large ears. Red-brown stripes run from the corner of each eye across each cheek, and there are red-brown patches either side of the nose. The ears and tail have black tips.

The legs of the sand cat are short, and the species walks and runs with a low, crouched gait. Like most cats, it has five claws on its forepaws and four on its hind paws. The claws are not fully retractable and can often be seen in the cat’s footprints.

The claws of the sand cat are relatively blunt because in the desert there are few surfaces on which they can be sharpened.

The sand cat has two subspecies:

How Big Is A Sand Cat?

Where Are Sand Cats Found In The Wild?

The sand cat is found in several disconnected locations across North Africa, the Middle East and Central Africa.

The sand cat was once found in Pakistan, but it is not known if the species is still present in this country.

The sand cat lives in sandy desert or stony desert habitats with little vegetation. The species can live in sand dunes with enough vegetation to support an adequate prey population.

Habitats in which the sand cat is found typically receive under 20 mm of rain a year.

Adaptations For Living In The Desert

The sand cat has a number of adaptations for living in the desert. These include:

The sand cat is usually nocturnal, but may become more crepuscular (active during the dawn and dusk) during winter.

During the daytime, the sand cat shelters from the sun in a burrow. Sand cats use the abandoned burrows of foxes, porcupines and gerbils, and also dig their own. A sand cat typically has several burrows in its home range.

The inhospitable desert habitat in which the sand cat lives supports little life, and the species therefore has to hunt far and wide in order to find prey.

Like most cats, the sand cat is solitary when not seeking a mate. It communicates with a bark-like call, and will also make low, meow-like sounds. Urine-spraying, scent marking and scratching are also used to communicate.

The sand cat is an opportunistic carnivore whose diet includes a wide range of vertebrate and invertebrate prey. Small rodents form the bulk of the sand cat’s diet, but reptiles (including venomous snakes), birds and insects are also taken.

Using its acute sense of hearing, the sand cat can locate prey moving underground. It then digs quickly to capture its prey.

The sand cat subdues venomous snakes with repeated jabs to the head. The cat then dispatches its prey with a bite to the neck.

Surplus food is buried under the sand and eaten later.

Females that are ready to mate attract males by scent marking and calling. The gestation period is 59-67 days, and litter size ranges from 2 to 8 kittens, with an average of three kittens. In some areas, females have two litters in a year.

The fast-growing kittens attain three-quarters of their adult size within 6 months. They are independent within a year and reach sexual maturity shortly after.

The sand cat is not immediately threatened, and the species’ conservation status is “Least Concern”.

Although found across a wide area, the sand cat’s population is sparse and patchily distributed.

Major threats to the sand cat are habitat loss and habitat degradation. The expansion of human settlements and the conversion of land into livestock farms reduces the amount of habitat available to the cat; the construction of fences and roads result in the cat’s population becoming ever-more fragmented; and a growing human presence in the cat’s desert habitat is detrimental to the sensitive cat’s ability to hunt and reproduce.

Sand cats are also captured for sale to the pet trade.

Expand your animal knowledge by visiting the following pages: