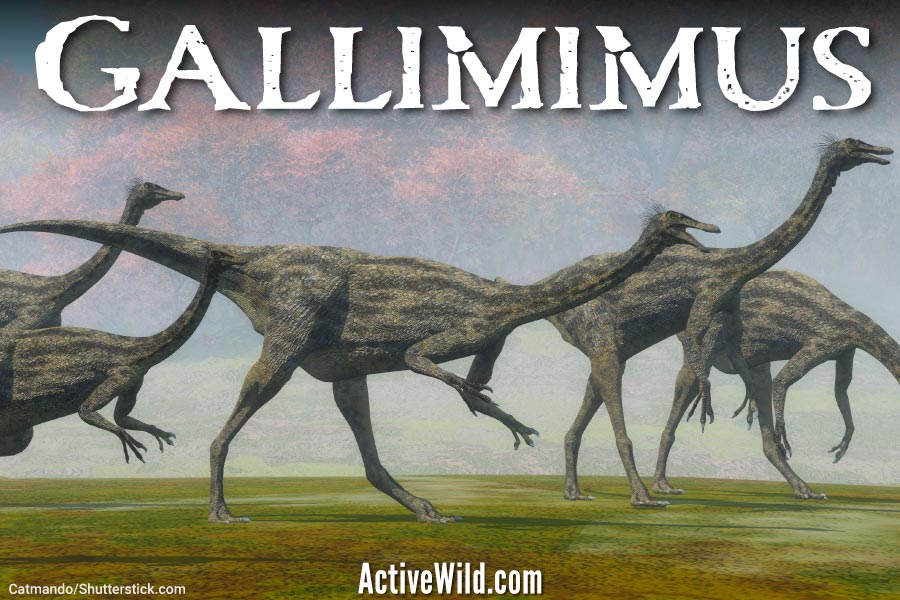 Gallimimus was a mid-sized theropod dinosaur that lived in what is now Mongolia during the late Cretaceous. It is the best-known and largest of the ornithomimids (“bird-mimics”), a family of dinosaurs named for their resemblance to living birds such as ostriches. With a slender, lightweight body and powerful legs, Gallimimus was built for speed and is one of the fastest-known dinosaurs. 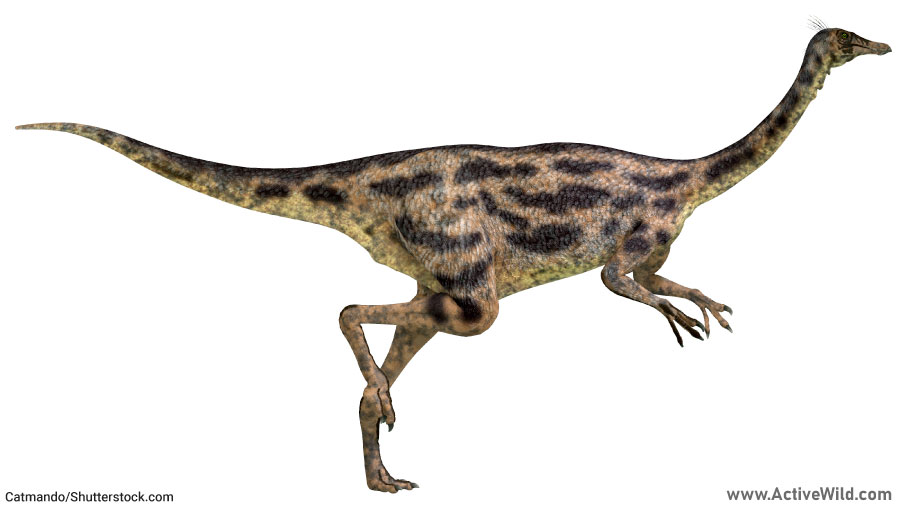 Gallimimus was a mid-sized, lightly-built dinosaur. It walked on its powerful hind legs and had a long neck in proportion to its body. The arms were shorter than those of other ornithomimids, but proportionally longer than those of tyrannosaurids such as Tyrannosaurus rex. The hands had three digits and were relatively small and inflexible.

The name Gallimimus means “chicken mimic”. It refers to the neck vertebrate of the dinosaur, which resemble those of living chickens. The dinosaur had hollow bones, which were light yet strong.

Gallimimus’s resemblance to modern birds doesn’t end there; in life the dinosaur would have looked and moved somewhat like a modern ostrich, with long legs, a lightweight frame and a long, flexible neck.

(As we’ll find below, Gallimimus belonged to Ornithomimosauria, a group of dinosaurs known as “ostrich dinosaurs” due to their resemblance to the living ostrich.)

Gallimimus had a small head, and a long, wide-tipped, toothless beak that was similar in appearance to that of living ducks and geese.

The eyes of Gallimimus were large and positioned on the side of the head, giving the dinosaur good peripheral vision but poor depth perception. Its brain was around the size of a golf ball.

The discovery of multiple Gallimimus specimens in the same location suggests that the dinosaur may have lived in groups.

Did Gallimimus Have Feathers?

Gallimimus is thought to have had feathers covering most of its body. Evidence of this comes from fossils of a related dinosaur, Ornithomimus. Several Ornithomimus specimens show traces of feathers, suggesting that other ornithomimosaurs, including Gallimimus, were also feathered.

The forearms of Gallimimus may have had feathered, wing-like structures. These may have been used for display purposes, demonstrating an individual’s fitness to potential mates.

How Fast Was Gallimimus?

Ornithomimosaurs were built for speed and were among the fastest of all dinosaurs. Gallimimus, with its powerful legs and slender body, is thought to have been able to reach speeds of 29–34 mph (42–56 km/h).

(Some paleontologists believe that the dinosaur’s top speed may have been as fast as 50 mph / 80 km/h.)

What Type Of Dinosaur Was Gallimimus?

The family Ornithomimidae is part of Ornithomimosauria – a wider group of related dinosaurs that appeared early in the Cretaceous Period. The name of this group means “bird-mimic dinosaurs” and refers to the bird-like bodies of this type of dinosaur. The group is also known as “ostrich dinosaurs” due to resemblances between them and living ostriches.

When Did Gallimimus Live?

Gallimimus lived around 70 million years ago, during the Late Cretaceous epoch (the second and most recent of the two epochs into which the Cretaceous Period is divided).

Where Did Gallimimus Live?

Gallimimus lived in what is now the Gobi Desert in Mongolia. The first Gallimimus specimens were discovered in the 1960’s in the Nemegt Formation – a layer of sedimentary rock formed during the Late Cretaceous (see Wikipedia). Specimens of both adults and juveniles were found at this time.

The largest Gallimimus specimen found at this time was discovered by Polish paleontologist Zofia Kielan-Jaworowska in 1964.

This specimen became the holotype from which both the genus Gallimimus and its type species Gallimimus bullatus was described in 1972 by paleontologists Halszka Osmólska, Ewa Roniewicz and Rinchen Barsbold.

Several other dinosaurs have been discovered in the same formation and may have lived with Gallimimus. These include the ornithomimosaurs Anserimimus and Deinocheirus, the oviraptorosaur Avimimus, and the tyrannosaur Tarbosaurus.

Gallimimus was named in 1972. It was described from

Was Gallimimus The Fastest Dinosaur?

Ornithomimids such as Gallimimus are considered to have been among the fastest dinosaurs. With its ostrich-like build, Gallimimus is often given the title of “fastest dinosaur”. It would likely have used its speed to outrun predators such as the fearsome Tarbosaurus.

What Did Gallimimus Eat?

Gallimimus was an omnivore that ate small animals and plants. Its flexible neck, sideways-pointing eyes and short arms suggest that it raked the ground in order to find small animals, which it would then have captured in its long beak and swallowed whole.

Ridges in the beak of Gallimimus (similar to those found in today’s ducks) are thought to have allowed the dinosaur to filter food from other matter collected in its beak.

Gallimimus lived in moist habitats and may have specialized in feeding on aquatic animals and plants.

Some paleontologists argue that Gallimimus was primarily, if not entirely, herbivorous, and that the ridges in the dinosaur’s beak were for cutting tough plants.

Stones found in the stomachs of some ornithomimids may have aided the digestion of tough plant matter (modern animals such as crocodiles and ostriches swallow stones for this purpose).

Ornithomimids were abundant in many habitats, which, based on comparisons with today’s ecosystems, suggests that they were herbivores.

Gallimimus is one of the dinosaurs that appears in the original Jurassic Park movie. A Gallimimus herd is seen running through a valley, briefly surrounding Dr Alan Grant and the kids and forcing them to take shelter behind a fallen tree. As the humans watch, one of the herd is grabbed by a Tyrannosaurus rex.

The scene emphasizes the bird-like flocking behavior that paleontologists believe dinosaurs such as Gallimimus may have exhibited.

How realistic are the Gallimimus in Jurassic Park? Well, based on what we know today, they’re actually pretty life-like in terms of size, behavior, movement and general appearance. However, in the film Gallimimus lacks feathers, which many scientists now believe it would have had.

(Perhaps the producers of the upcoming third Jurassic World film will give at least some of the dinosaurs feathers?)