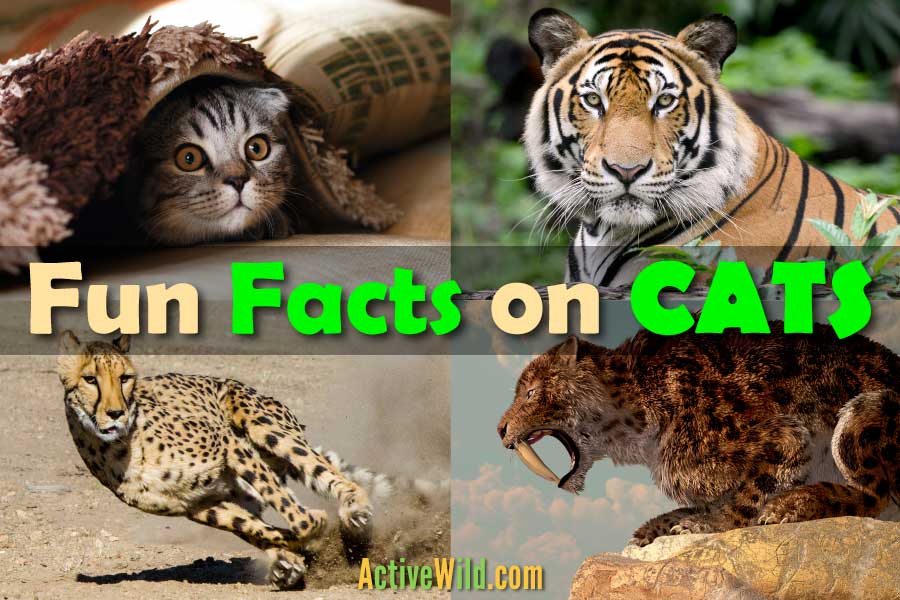 Fun facts on cats for kids and adults – learn more about the cat family Felidae and amaze your friends with your cat knowledge! On this page you’ll find a list of facts about both domestic and wild cats…

When zoologists talk about cats, they mean any of the 41 species in the animal family Felidae (the cat family).

When most other people talk about cats, they mean just one species: the domestic cat.

The domestic cat is descended from the African wildcat, a species still found in the wild in Africa and Asia.

Domestic cats are kept as pets on all continents except Antarctica.

Different breeds of cat can look very different to one another, despite being the same species. For example, breeds such Persian or British longhair have long hair, while breeds such as Burmese and American shorthair have short hair.

Some breeds, such as the Sphynx and Donskoy cat, have no hair at all!

Each breed of cat is a result of selective breeding to encourage certain characteristics, such as coat length, body size, or coat pattern.

It is estimated that there are 95 million domestic cats in the United States, 76 million in Europe, 7 million in Japan, 7.3 million in the UK and 3 million in Australia.

There may be over 200 million domestic cats in the world – perhaps as many as 600 million!

Studies have found that pet cats improve their owners’ moods, and that owning a cat decreases a person’s likelihood of having a heart attack or stroke.

Unfortunately, some people are allergic to cats, experiencing symptoms such as wheeziness, sore eyes and coughing whenever they come into contact with a cat.

Cats first became domesticated in Ancient Egypt at least 4,500 years ago. Paintings dating from this time depict cats with collars, suggesting that the animals were being kept as pets. Also dating from around this time are human tombs that also contain the remains of cats.

Cats may been domesticated even earlier than this. In Cyprus, the remains of an African wildcat were excavated close to a 9,500 year-old stone-age tomb. Because the cat was not native to the island, historians believe that it arrived there with humans.

Members of this family (i.e. cats!) are also known as felids.

Felidae is part of a larger group of animals: the order Carnivora.

Other animal families in Carnivora include Canidae (the dog family), Ursidae (the bear family) and Phocidae (the earless seal family).

All members of Carnivora share a common ancestor. This is thought to be a small, weasel-like animal that lived around 55 million years ago.

Cats, naturally, belong in Feliformia. Other ‘cat-like’ carnivorans include mongooses, hyenas and viverrids (animals such as civets, genets, and the binturong). These animals are the cats’ closest relatives in the animal kingdom.

Felidae (the cat family) is divided into two subfamilies: Pantherinae and Felinae.

All of the other cat species are members of the subfamily Felinae. They are sometimes known as the ‘small cats’, although their largest members, the puma and the cheetah, are bigger than some of the smaller ‘big cats’.

Some are large, some are small, some live in deserts, some live in forests, but all 41 members of the cat family share certain characteristics…

Your pet cat may seem cute, but both his body and behavior are geared towards being an effective predator of small vertebrates!

Cats are obligate carnivores. This means that they can only get the nutrients they require from meat. Therefore they rarely, if ever, eat plants.

Cats hunt primarily using their senses of hearing and sight.

The hearing of smaller cat species is ‘tuned’ to hear the high-pitched rustling and squeaking produced by their small mammalian prey.

Like many predators (including humans), cats have forward-facing eyes. This gives them binocular vision, which means that they can judge how far away things are–a valuable skill when hunting, climbing and jumping.

Cats have large eyes, which, unlike ours, have an additional layer of tissue called a tapetum lucidum. This reflects light back into the eye and improves the cat’s night vision. (It also explains why a cat’s eyes appear to shine when caught in a beam of light at night.)

All cats (apart from the cheetah) have retractable claws. Being retractable, a cat’s claws are only exposed when necessary and are withdrawn between the toes when not in use. This prevents them from being blunted or damaged unnecessarily.

Most cats rely heavily on stealth when hunting. A typical hunt involves the cat creeping silently towards its intended victim until close enough to make either a final, deadly pounce or high-speed chase.

A combination of padded paws and retractable claws prevent a cat’s footsteps from being heard by their prey.

When stalking, cats ‘directly register’. This is a special way of walking in which the hind paw touches the ground at the spot just deserted by the corresponding fore paw. By walking in this way a cat need only concentrate on where it’s putting its front feet. This means it can keep its attention on its prey.

A cat’s tongue is covered in small bumps called papillae. These contain a hard substance called keratin, and are what give a cat’s tongue its rough texture. Cats use their tongues to remove meat from prey and also as ‘combs’ when grooming.

Cats are highly territorial and usually live and hunt alone. The only truly social cat is the lion, which lives in groups called prides.

Despite being solitary animals, cats keep in contact with their neighbors by scent-marking their territory. The sense of smell plays an important part in cat communication.

The term ‘wild cat’ refers to any of the 40 undomesticated cat species. The term ‘wildcat’ (without a space) refers to either of two closely related cats: the European wildcat or the African wildcat.

Wild cats are found on all continents except Australia and Antarctica.

Of the 40 currently-recognized wild cat species, only 13 have the conservation status of ‘Least Concern’.

2 cat species are currently unassessed, leaving 25 cat species that are either Near Threatened, Vulnerable or Endangered.

Cats require large territories containing plenty of prey animals. One of the biggest threats to wild cats is habitat loss due to deforestation.

The tiger, one of the best-known of all cat species, is Endangered. Lions, leopard, snow leopards and cheetahs all have the conservation status of Vulnerable.

There are fewer than 3,500 adult wild tigers left in the wild. Think about that; any time you see sport on the television it’s likely that there will be far more people in the crowd than there are tigers in the wild!

The smallest cat species is the rusted spotted cat Prionailurus rubiginosus. Weighing a maximum of 3.5 lb / 1.6 kg, it is significantly smaller than a domestic cat.

The fastest cat is the cheetah. It is able to reach speeds of over 70 mph / 112.6 km/h in short bursts, making it not just the fastest cat, but also the world’s fastest land animal.

The world’s rarest cat is the Iberian lynx. There are only around 156 adult Iberian lynxes in the wild. This rare European wild cat became endangered due to over-hunting and habitat loss.

Cats first appeared between 35 and 28.5 million years ago, during either the Eocene or Oligocene epoch of the Paleogene Period.

The earliest known cat is Proailurus. It lived around 25 million years ago. Proailurus fossils have been found in Mongolia, Germany and Spain.

A descendant of Proailurus is Pseudaelurus. Pseudaelurus was the first cat to reach North America. It was also found in Europe and Asia.

Around the size of today’s domestic cat, Pseudaelurus had short limbs and was probably a good climber.

Pseudaelurus is thought to be the ancestor of all living cat species.

Smilodon, which appeared around 2.5 million years ago and only became extinct around 10 thousand years ago, is the best-known of the sabre-toothed cats.

Sabre-toothed cats are named for their huge canine teeth, which resemble the curved swords known as sabres used by soldiers in the 17th century.

Even larger than Smilodon populator, and possibly the largest cat that ever lived, was the American lion, Panthera atrox. This fearsome North American prehistoric cat was around 25% larger than a living lion. It lived from 340,000 to 11,000 years ago.

2 thoughts on “Fun Facts On Cats For Kids & Adults”