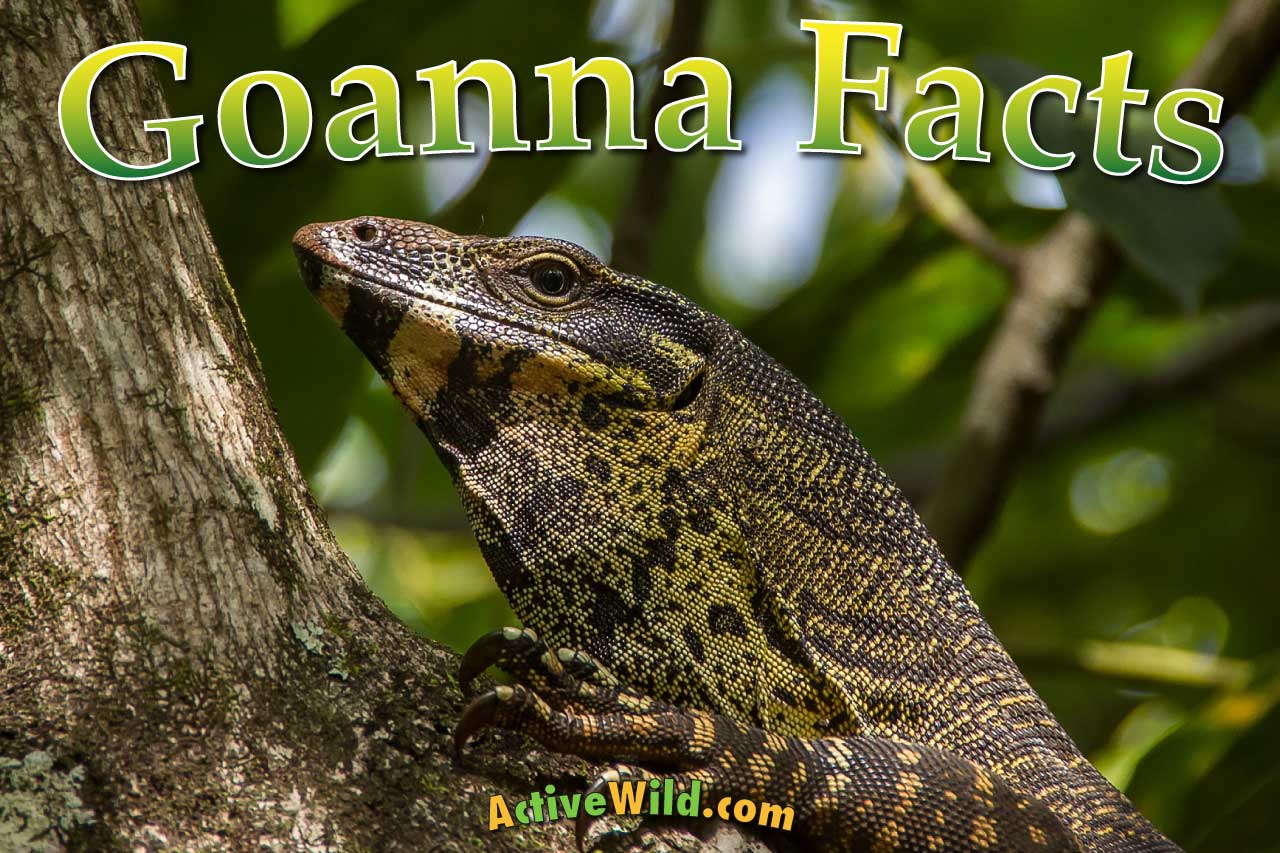 Goannas are among the best-known Australian animals. On this page you’ll find goanna facts, pictures and videos.

Goanna Facts at a Glance

All goannas are largely similar in appearance, having streamlined bodies with long necks and tails. Although they look similar, the size difference between the largest and smallest species is large.

The largest goanna is the perentie (V. giantess). This fearsome outback predator can reach lengths of over 2.5 m (8.2 ft). It can be found throughout much of Australia, but is most common in the country’s dry interior.

(You can find out more about the perentie here: Perentie Facts)

Another small goanna is the short-tailed monitor (V. brevicuda), which reaches lengths of around 25 cm when fully grown.

Goannas are typically dark gray, olive or brown, although some desert-dwelling goannas are white or orange-yellow. The skin is often patterned with stripes, bands, circles, blotches or speckles of a contrasting color (often light gray, yellow or white). This helps the lizards blend in to their environment.

Where Are Goannas Found?

Goannas are found throughout mainland Australia but are not present on the island state of Tasmania.

Some goanna species, such as the sand goanna (V. goaldii), have a very large range (the area in which a species is found), and are present throughout most of mainland Australia. Many other species are restricted to far smaller areas. For example, the blue-tailed goanna (V. doreanus) is thought only to occur at the very northern tip of Cape York Peninsula in Queensland.

Goannas are found in a number of different habitats.

Many goannas, such as the perentie (V. giganteus), are ground-dwelling and inhabit sandy plains and rocky outcrops in Australia’s arid interior. Others, such as the lace monitor (V. varius) are largely arboreal (tree-dwelling).

You can see a lace monitor in the video below. Listen out for the breathing noises it makes, which may indicate that it is feeling threatened by the cameraman.

Some goanna species are found in coastal and freshwater habitats. These include the mangrove goanna (V. semiremex) which occurs in swampy coastal environments. Merten’s water monitor (V. mertensi) inhabits rivers and lagoons in northern Australia.

Goannas are usually diurnal (active during the day). Many ground-dwelling species dig extensive burrows in which they can shelter. Some species hibernate in burrows during the coldest months of the year (between May and August).

Goannas tend to be solitary outside of the mating season.

When threatened, goannas will usually flee, and if able, climb a tree. If cornered, they may rear up onto their hind legs, puff up the loose flaps of skin around their neck and make hissing noises. A cornered goanna will use its powerful tail, and sharp teeth and claws to defend itself.

Goannas are known to stand on their hind legs in order to scan their environment for potential danger.

Goannas can run at high speeds and are even able to run small distances on their hind legs. The perentie is known to be able to reach speeds of around 40 km/h (25 mph).

Many ground-dwelling species will also climb trees and swim when necessary.

Eggs that incubate inside a termite nest are protected from predators and also benefit from the nest’s constant temperature. As an added bonus, the goanna hatchlings may also snack on the termites! The female goanna typically returns to help the young dig their way out.

Goanna Diet: What Do Goannas Eat?

All goannas are carnivorous, but the size of the species and the habitat in which it lives affects the variety of prey that it eats.

The smallest goanna species tend mainly to eat insects, although some small goannas specialize in feeding on small lizards.

Bird eggs form a large part of the diets of many tree-dwelling goannas. The diets of aquatic goannas include fish, frogs, crabs and shrimp.

Large and medium-sized goannas simply take any prey they are able to catch and swallow whole. Their diets may include snakes, birds, snails, marsupials and other small mammals.

As well as hunting live prey, goannas will also scavenge. The lizards are attracted to the smell of rotting meat and will feed on the carcasses of dead animals when available.

Are Goannas Dangerous To Humans?

Goanna bites are painful and may continue to bleed for an extended amount of time. They also take a long time to heal. For many years it was thought that this was caused by bacteria found in the goanna’s mouth.

It is now known that goannas (and other monitor lizards) have venom glands similar to those of snakes. Unlike snakes, however, goannas don’t have fangs with which to inject the venom, and there isn’t enough of it to cause serious harm to humans.

Below is a list of all monitor lizard species found in Australia.