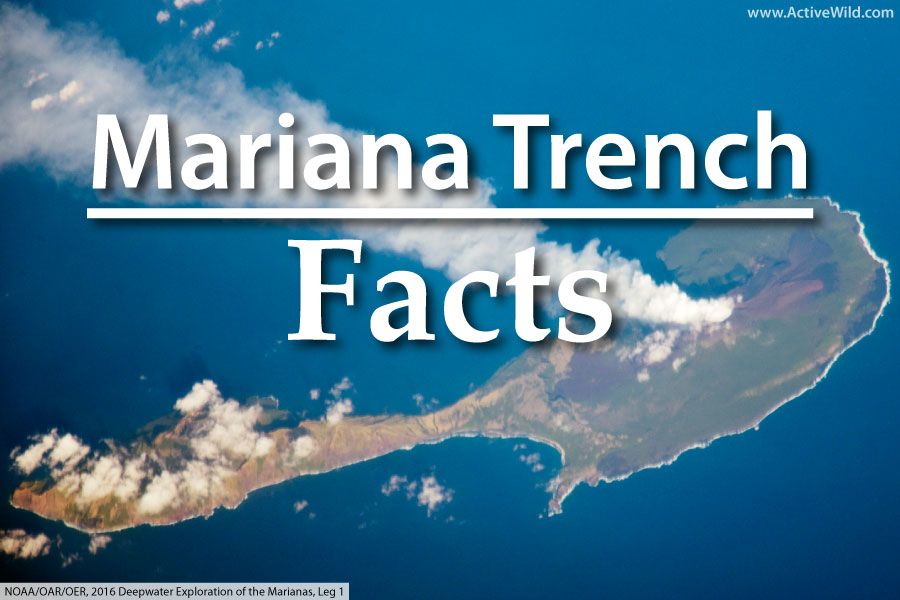 Mariana Trench facts, pictures and information. Join us almost 7 miles below the surface of the ocean to find out about the deepest point on Earth…

Introduction: What Is The Mariana Trench?

The Sirena Deep, the world’s third deepest point, is also located within the Mariana Trench.

How Did The Mariana Trench Form?

The Mariana Trench was formed as a result of the collision between two tectonic plates (large floating pieces of the Earth’s outer crust). The collision forced the larger and older Pacific Plate under the Mariana Plate.

The collision formed the crescent-shaped trench in the sea bed, and also the nearby island chain known as the Mariana Islands, or Marianas. The islands were formed by volcanic eruptions caused by the violent release of water contained within the Pacific Plate.

Where Is The Mariana Trench Located?

The Mariana Trench is located in the western Pacific Ocean. It lies roughly 200 km (124 mi) east of the Mariana Islands.

The deepest point of the trench, the Challenger Deep, lies roughly 320 km (200 mi) south-west of the U.S. territory of Guam.

You can use the interactive map below to find the location of the Mariana Trench:

How Long Is The Mariana Trench?

How Deep Is The Mariana Trench?

What Is The Pressure At The Bottom Of The Mariana Trench?

Pressure at the bottom of the Mariana Trench is 1,086 bars (17,750 psi), which is more than 1,000 times the standard atmospheric pressure at sea level. At this pressure, water is 4.96% more dense than it is at the surface of the ocean.

What Is The Water Temperature At The Bottom Of The Mariana Trench?

Exploration Of The Mariana Trench

The depth of the Mariana Trench was first measured in 1875 as part of the British Challenger expedition. This was a British scientific expedition which took its name from the naval vessel involved, HMS Challenger.

During the first Challenger expedition the depth of the Marianas Trench was taken with a weighted sounding rope. In 1951 the depth was re-measured, this time by the British naval survey ship Challenger II, using a more accurate echo-sounder.

Only a handful of manned dives have been made to the bottom of the Mariana Trench. The first to make the descent were Swiss engineer Jacques Piccard and US Navy lieutenant Donald Walsh in 1960. In 2012 the dive was repeated by film director James Cameron.

In 2019, a submersible named Limiting Factor descended to the Challenger Deep four times and to the Sirena Deep once as part of the Five Deeps Expedition.

Two of the dives, including a record-breaking dive down to a depth of 10,928 m (35,953 ft.), were piloted solo by ocean explorer Victor Vescovo.

Several unmanned remotely operated underwater vehicles have also made the descent to explore the trench, including Kaikō in 1996 and Nereus in 2009.

What Animals Live In The Mariana Trench?

Sources of energy in the depths

Since sunlight doesn’t reach the depths of the Mariana Trench, there are no photosynthesizing organisms converting light into food. Instead, bacteria convert inorganic molecules into organic compounds through chemosynthesis.

Other sources of food for organisms living at the bottom of the Mariana Trench include whale carcasses and other bits of organic material that sink to the sea bed.

Adaptations to living in the deep

The extreme conditions in the Mariana Trench – extreme pressure, near-freezing temperature and complete darkness – have led to some interesting adaptations among the inhabitants of the trench.

For example, many animals are translucent (lack color), some have very thin and pliable bones, and some produce light to either lure prey or to confuse their predators. Some animals also grow to a much larger size and live longer than related shallow water species.

Examples Of Animals That Live In The Mariana Trench

The deepest-dwelling octopus in the world is a type of Dumbo octopus. This small octopus has large ear-like fins and webbed tentacles and can be found at depths of 4,000 m (13,100 ft.) in the Mariana Trench.

The octopus lacks an ink sack (which is useless in the dark waters) and a beak (the animal swallows its prey whole rather than breaking it apart).

The Mariana Trench is also home to the deepest-dwelling fish in the world. Although not yet officially named, it is a species of snailfish, and has been nicknamed the ‘ethereal snailfish’, or ‘ghostfish’.

A special chemical helps the molecules in the animal’s jelly-like body withstand the enormous pressure of its deep sea environment.

Also known as spookfish, these animals have a see-through head and a pair of barrel-shaped, upward-pointing eyes. The fish spend most of their time motionless, waiting for their prey to come within striking distance.

Hatchetfish are bioluminescent fish that can adjust how brightly they glow. The animals grow to lengths of up to 15 cm (6 in) and have extremely skinny bodies and shiny scales.

Osedax, also known as zombie worms or bone worms, are deep sea bristle worms that feed on bones. These animals use symbiotic bacteria to digest the nutrients they extract from the bones. The 5 cm (2 in) female Osedax houses a ‘harem’ of microscopic males inside her bodies.

hyalinus is a peculiar-looking small jellyfish with a dome-like bell and hundreds of wispy tentacles. The jellyfish feeds on crustaceans and xenophyophores (large single-celled amoeba-like organisms).

We hope that you enjoyed this collection of Mariana Trench facts. You can discover more about our amazing planet on the following pages: