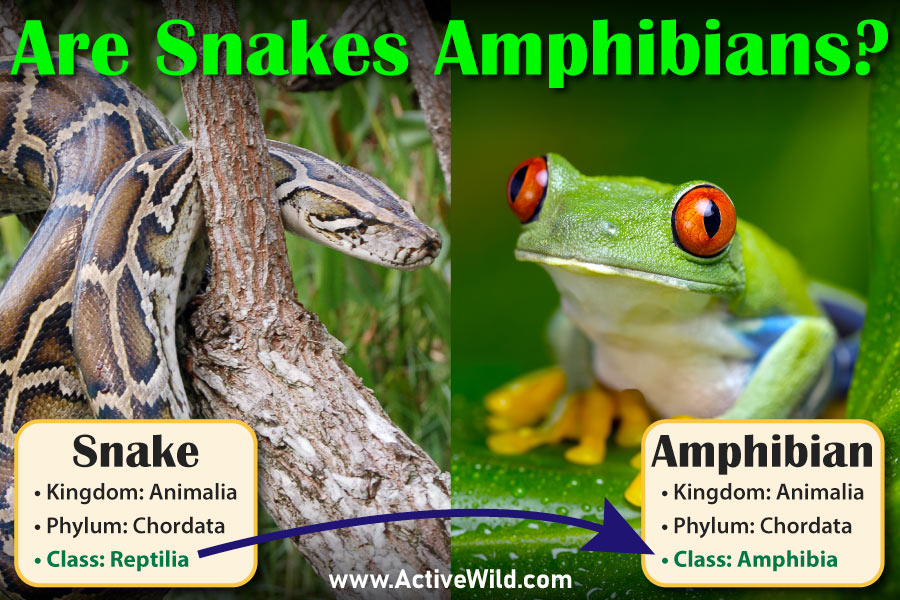 Although many snakes are skilful swimmers, spending much of their time living or hunting in water, they are not considered amphibians, as they do not belong to the class Amphibia.

Together, amphibians and reptiles are collectively known as herpetofauna, or “herps”.

The Evolution Of Amphibians And Reptiles

Travel back 544 million years ago, and we find ourselves at the start of the Paleozoic Era. Over the course of the next 290 million years, life on Earth would take shape into basic forms that are still recognizable today.

The first amphibians, and the first reptiles, appeared during the Paleozoic Era. (Snakes would only evolve from other reptiles millions of years later, during the Mesozoic Era).

Fish, the first vertebrates, appeared early on in the Paleozoic Era. The first amphibians evolved from fish. From amphibians, the first reptiles would evolve.

The origins of reptile and amphibian evolution can be traced back to three distinct periods of the Paleozoic Era:

The Devonian Period is when fish began to resemble amphibians. Our biggest clue to this transition, was Ichthyostega, an animal somewhere between a fish and an amphibian.

Fossil records show Ichthyostega had legs not too dissimilar from those of today’s mudskipper fish, which enabled it to walk on land for extended periods. Ichthyostega also had lungs, which it used as its primary means of gas exchange (“breathing”), as well as gills.

Amphibians Rise To Dominance On Land

Between 300-250 million years ago, during the Carboniferous and Permian periods, primitive amphibians became better adapted to life on land.

Body alterations, such as nostrils and increased lung efficiency to improve oxygen intake, and a stronger skeleton to cope with the increased pressure out of the water, helped amphibians to become the dominant land species.

This was also the time amphibians started to evolve into reptiles. It is thought that Seymouria, an animal living in the Permian period, is the connecting link between amphibians and reptiles.

Seymouria had the skull of an amphibian, but the rest of its skeleton resembled that of a reptile.

During the Carboniferous Period, around 305 million years ago, reptiles overtook amphibians as the dominant land animals. They would wrestle with another group of egg-laying vertebrates, the synapsids (which included the ancestors of all living mammals), for dominance for the remainder of the Paleozoic Era.

The shelled eggs of both early reptiles and their mammal-ancestor adversaries, could be laid on land, giving these animals a major advantage over their amphibian ancestors, who still relied on a water source to lay their jelly-like eggs.

Although some of the first reptiles were snake-like organisms, the first true snakes wouldn’t appear until the Cretaceous Period, over a hundred million years later.

Similarities Between Snakes And Amphibians

Reptiles and amphibians are descended from a common ancestor. Both are vertebrates and both belong in the phylum Chordata (a group of animals that possess a notochord – a flexible central nerve cord).

Unlike humans and other mammals, all herpetofauna (reptiles and amphibians) are cold blooded. This means they cannot regulate their body temperature, as they lack an internal “thermostat”.

Instead, reptiles (including snakes) and amphibians rely on their external environment to generate heat – perhaps by basking on a sunny rock or swimming in sunlit water.

When temperatures are too cold to bask, amphibians and reptiles may brumate. Brumation is a state of dormancy similar to hibernation, but not quite. Brumating animals go through periods of wakefulness, and drink water when needed.

If the external temperature is too hot, many reptiles and amphibians either burrow or take refuge in sheltered habitats to cool down.

A group of amphibians known as caecilians have long, limbless bodies, and are almost identical to snakes in appearance. Found burrowing in muddy earth or among leaf litter, caecilians prey on small invertebrates, such as earthworms.

Most reptiles are not highly reliant on sound production, or “vocalization”, as a means of communication. Crocodilians are the most vocal reptiles, but even they are limited to a range of hisses, roars and barks.

Of the amphibians, only frogs are highly vocal (especially during the breeding season, when male frogs call out to attract females).

Differences Between Snakes And Amphibians

Although both reptiles (including snakes) and amphibians are “lumped together” in the study of herpetology, there are a number of differences between the two groups of animals.

One of the biggest differences between snakes and amphibians is their skin. Snakes, and other reptiles, have dry skin, covered in a layer of hard scales.

Amphibians do not have scales. Rather, their skin is soft and moist, often covered in a layer of mucus that protects the animals from desiccation (drying out).

The skin of an amphibian is also very porous. This allows for gas exchange to occur through the skin, as well as via the lungs.

Essentially, amphibians can “breathe” through their skin, while reptiles such as snakes cannot.

Snakes (and other reptiles) have impermeable, waterproof scales that have allowed them to colonize certain niches that are unavailable to amphibians. Snakes for example, can be found in the ocean.

The majority of both reptiles and amphibians are oviparous, meaning they lay eggs externally. However, the similarities end there.

Snakes, and other reptiles, have evolved a protective outer shell around their eggs. This shell can either be brittle or leathery, but the function remains the same: to protect the developing young from drying out on land.

This evolutionary advantage has allowed reptiles to lay their eggs in an array of terrestrial (land) environments.

Amphibians, on the other hand, lay jelly-like eggs. These moist clusters must be laid either directly in a water source, or very close by to one.

Reptiles are therefore able to inhabit a much larger range of habitats than amphibians.

The young of snakes and amphibians also differ considerably. While young snakes look like miniature versions of their adult selves, the young of amphibians often bear little or no resemblance to their adult forms.

Most hatchling amphibians are aquatic and have gills and a tail for swimming. Via a process called metamorphosis, the bodies of most amphibians go through a complete transformation, losing their gills and tails, and developing lungs and legs.

You can find out more about different types of snakes on this page: Types Of Snakes

There are between 3,500 and 3,900 different snake species, with more potentially still to be discovered.

Although snakes are adaptable reptiles and able to live in a range of habitats, they are yet to colonize Antarctica, New Zealand and a few other Northern islands.

Out of the 3,500+ snake species, approximately 600 are venomous. Of these, only around 7% pose any serious threats to humans.

The infraorder of Scolecophidia has just 3 families of snakes. The families within this infraorder include blind snakes, dawn blind snakes and slender blind snakes / thread snakes. Blind snakes can grow up to 100cm, and live a mostly fossorial (burrowing) lifestyle.

There are three extant orders of amphibians:

Should We Care About Herpetofauna?

Reptiles, especially snakes, are often overlooked in favor of “cuter” and more “cuddly” animals (although a thriving community of reptile-keepers does exist).

Amphibians, too, despite their fascinating lifestyles, don’t have the attraction of mammals and birds.

This is a shame, because reptiles (including snakes) and amphibians play vital ecological roles.

Many snake species, including rat snakes, feed off pests, such as mice and rats. Unbeknown to many humans, these snakes play a pivotal role for human health and safety, keeping the number of potential disease-carrying animals in check.

Many species of amphibians are both predators and prey in their respective food chains. Amphibians often feed on invertebrates, and are themselves food for birds, reptiles, mammals and fish. The presence of amphibians ensures the food chain is unbroken.

Herpetofauna, especially amphibians, also serve as environmental indicators, providing us with information on the health of ecosystems.

The permeable skin of amphibians makes them very sensitive to toxic pollutants in the atmosphere; their presence (or absence) gives scientists an indication as to the health of certain environments. Snakes, too, can help us to monitor environmental disturbances such as habitat loss.

Are Snakes And Amphibians In Danger?

You can find out more about endangered animals on this page: Endangered Animals

You can find out more about critically endangered animals on this page: Critically Endangered Species

Unfortunately, many snakes and amphibians are threatened. Reptiles, and particularly amphibians, are highly sensitive to changes in the environment.

Many species of snake and amphibian simply cannot keep up with the rate at which we are altering habitats across the world. The following are just some of the threats faced by both snakes and amphibians:

For those who aren’t keen on snakes or frogs, this may sound like great news, but in reality, the threat to the most vulnerable of species is a threat to us all.

Declines in herpetofauna has led to the collapse of certain ecosystems. Because all ecosystems are interconnected, a change in one can have a knock-on effect on others – including, perhaps, one upon which humans are reliant.

We must protect and conserve snakes and amphibians for a healthy planet.

You can find out more about the animal kingdom on the following related pages: