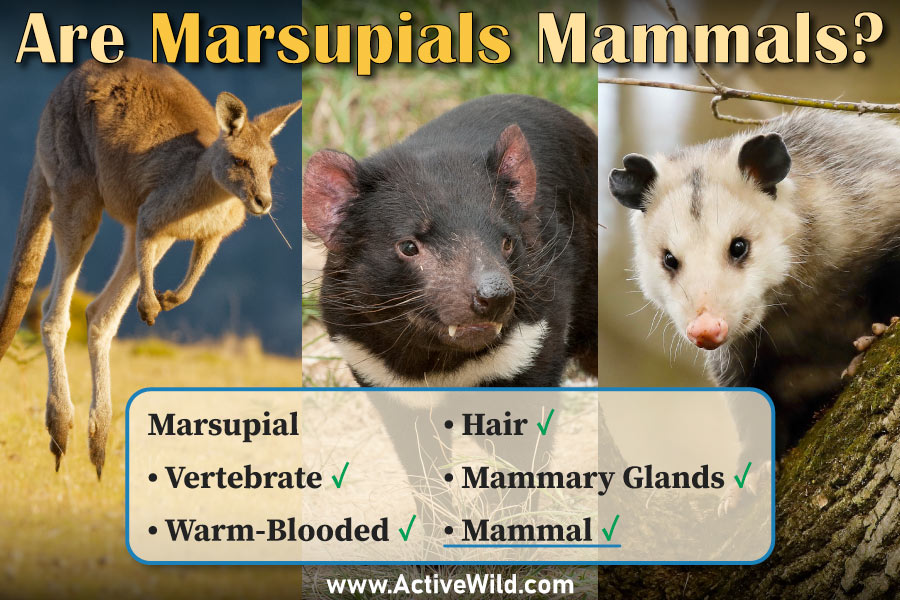 Marsupials are mammals and, like all other mammals, belong to the class Mammalia. Marsupials are known as “pouched mammals” because, after being born, their young continue to develop in a special pouch in the mother’s abdomen.

Marsupials belong to the infraclass Metatheria, which is one of the three main mammal groups, the others being the egg-laying monotremes and the placental mammals.

Well-known marsupial species include the red kangaroo, red-necked wallaby, koala, Tasmanian devil, and Virginia opossum (the only marsupial found in the wild in the USA).

You can see more examples of marsupials on this page: List of Marsupials with Pictures & Facts

The 335 living marsupial species are found only in Australasia and the Americas (with most New World species being found in South America). There are no marsupials found in the wild in either Europe or Asia.

Why Are Marsupials Mammals?

The Three Main Types Of Mammals

In order to understand why marsupials are considered mammals, we need to know a little more about what mammals are…

A mammal is an animal belonging to the class Mammalia. (A class is a group of related animals.)

Other well-known animal classes include Reptilia (reptiles) and Amphibia (amphibians).

Although there are several differences between marsupials and the other types of mammals, all mammals (including marsupials) are descended from a common ancestor, and as a result, share certain characteristics.

It is these mammalian characteristics that differentiate mammals from other types of animals.

All mammals (including marsupials) have the following defining characteristics:

You can see more mammals on this page: List Of Mammals

Why Are Marsupials Mammals?

The presence of mammary glands and hair in marsupials means that they belong to the class Mammalia, and are therefore mammals, rather than any other class of animal (e.g. reptiles or amphibians).

You can find out more about reptiles on this page: Reptiles: The Ultimate Guide

You can find out more about amphibians on this page: Amphibians: The Ultimate Guide

You can see more types of mammals on this page: Types Of Mammals

The Three Main Types Of Mammals

There are three main types of mammals:

Examples of metatheria / marsupials include the red kangaroo, koala and Tasmanian devil.

Examples of placental mammals include the tiger, killer whale and humans.

Monotremes are a very special group of just five mammals: the platypus, and four species of echidna.

What is remarkable about monotremes is the way they reproduce; unlike all other mammals, monotremes lay eggs.

Marsupials are less closely related to Monotremes than they are to placental mammals. Monotremes are the only mammals that lay eggs; both marsupials and placentals give birth to live young.

You can find out more about the platypus on this page: Platypus Facts

You can find out more about echidnas on this page: Echidna Facts

Characteristics that separate marsupials from other mammals include:

Most female marsupials have a pouch (which is also known as the marsupium). In some species, the pouch consists of no more than a fold of skin. In others, the pouch is a fully-developed, fur-covered opening.

The pouch provides a protective area in which an infant marsupial – often referred to as a “joey” – can develop.

Compared to the young of placental mammals, marsupials are born at a very early stage of development. A newborn marsupial can resemble a small, hairless, jellybean.

A marsupial is not born in the pouch. After emerging from the birth canal, the joey has to make its way up its mother’s body to the pouch. Here it will attach itself to a teat and begin to feed.

In order to make this journey, a newborn marsupial is equipped with strong forelimbs.

The female marsupial’s pouch provides a protective area in which the joey can continue its development. The mother’s mammary glands are located within the pouch. Therefore, not only does the pouch provide protection and warmth, it also provides nourishment.

The infants of some marsupial species may remain in their mother’s pouch for as long as 12 months. During this time the infant’s hair, eyesight and ability to walk, etc., develop sufficiently for it to live independently of its mother.

The young of placental mammals are born at a far more advanced stage of development than those of marsupials.

While in the mother’s uterus, an infant placental mammal receives nourishment via an organ known as a placenta. The placenta also provides the fetus with oxygen, and removes carbon dioxide and waste products.

The gestation period of an animal is the time taken for the fetus to develop from fertilization to birth. This period varies per species, but the general rule of thumb is the smaller the species, the shorter the gestation period.

The gestation period of marsupials usually lasts no longer than 5 weeks.

The shortest recorded gestation of a marsupial is from a tiny, carnivorous species known as the stripe-faced dunnart. These mouse-like marsupials have a gestation period of just 11 days.

Even the largest marsupial, the red kangaroo, has a gestation period of only 33 days.

Marsupials are members of the infraclass Metatheria. This group contains not only marsupials, but also all mammals more closely related to marsupials than they are to placental mammals.

In other words, Metatheria includes the ancestors of marsupials, as well as all true marsupials, both living and extinct.

Metatherians are believed to be more closely-related to eutherians (placental mammals) than they are to monotremes.

It is unknown exactly when metatherians diverged from placental mammals; the split is believed to have occurred at some point between 125 and 90 million years ago, during the Early Cretaceous.

While dinosaurs were still at their peak, mammals were busy diversifying beneath their feet!

Paleontologists separate early marsupials from their placental relatives by looking at a specimen’s teeth; metatherians have four pairs of molars, whereas placental mammals have a maximum of three pairs of molars.

(Another characteristic of metatherians is an extra pair of openings in the skull, known as “palatal fenestrae”.)

What Was The First Marsupial & When Did It Live?

The first known marsupial was Peradectes minor. This opossum-like animal was found in what is now North America. It lived in the Paleocene Epoch, shortly after the Cretaceous-Paleogene Extinction Event that caused the extinction of the large dinosaurs.

Other specimens of genus Peradectes have been found in Europe.

It is thought that the relative scarcity of metatherians today is a result of their being unable to compete with placental mammals.

South America had been separated from North America since the Cretaceous Period by a body of water known as the Central American Seaway. It was only with the formation of the Isthmus of Panama, around 4 million years ago, that the two continents were again joined.

The many millions of years of separation from North America gave the marsupials of South America the chance to diversify into a variety of niches.

With the formation of the Isthmus of Panama, and the resultant migration of placental mammals from North America into South America, the diversity of marsupials in South America once again suffered.

Only around 30% of living marsupials are found in the Americas. Only one marsupial, the Virginia opossum, is found further north than Mexico.

Marsupials from South America reached Australasia by way of Antarctica, then a temperate region rather than the cold desert that it is today.

In Australasia, an absence of placental mammals allowed marsupials to diversify greatly. Even today, 70% of all marsupial species are found on the Australian continent.

Another explanation for marsupials being restricted primarily to the Southern Hemipshere is that marsupials fared poorly in the Cretaceous-Paleogene Extinction Event, which not only ended the reign of the dinosaurs, but also caused the extinction of many other types of animals and plants.

The Catalogue of Life (an online database of species) currently lists 335 living species of marsupials. (Source)

On this page you’ve found that marsupials are mammals. Together with monotremes and placental mammals, marsupials make up the three main types of mammals.

All mammals have certain characteristics in common, including milk-producing mammary glands, hair, breathing air with lungs, and being warm-blooded.

Discover amazing animals from around the world: Animals A to Z

Is A Turtle A Reptile?