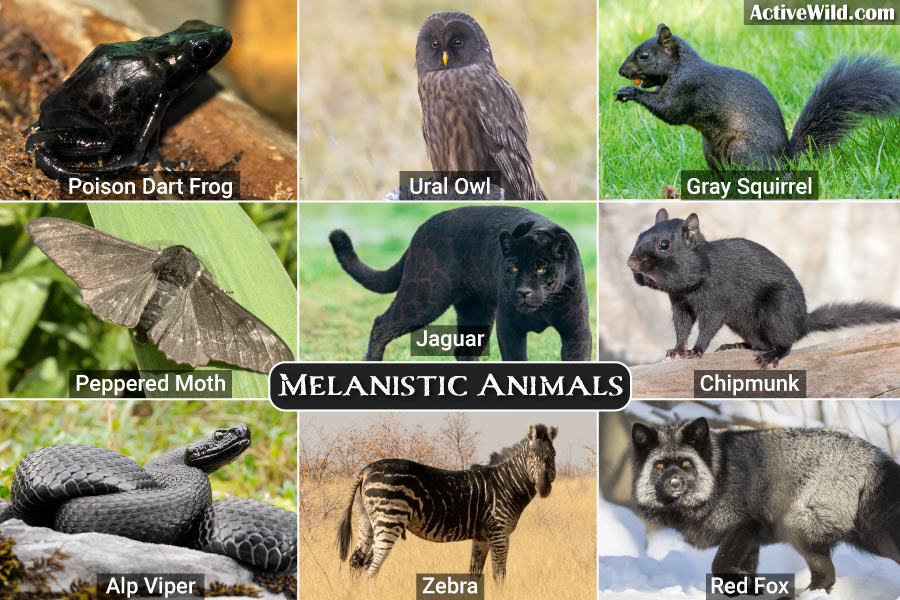 Melanistic animals are animals with an increased amount of the dark pigment melanin in their skin, hair and feathers, etc., giving them a dark appearance. Melanism is a genetic mutation that occurs in many different types of animals, including mammals, reptiles and insects. Among the best-known melanistic animals are the black leopards and jaguars known as panthers.

Other melanistic animals include squirrels, deer, pheasants, the silver fox (a melanistic red fox), several cat species, even penguins (a melanistic king penguin was filmed during the making of the BBC series “Dynasties”) and flamingos (a black flamingo was spotted in Cyprus in 2015).

On this page we explore melanism and other genetic conditions that affect the appearance of animals, and provide pictures and facts on a variety of melanistic animals.

Melanism is a disorder that causes an abnormal increase in the production of the dark pigment melanin. It is a phenotype (an observable characteristic) arising from an organism’s genetic makeup. It can be seen as the opposite of albinism (which is a lack of pigment).

Melanin is a chemical produced by cells known as Melanocytes. It is naturally present in an animal’s skin, hair, feathers, scales, etc. A melanistic individual will appear dark brown or black.

Occasionally, melanism can be advantageous. In certain situations, melanistic individuals may be better camouflaged, or better protected from harmful rays from the sun, for example.

These advantages may mean that melanistic individuals are more likely to reproduce (if they are better camouflaged, for example, they will be less likely to be eaten before reaching sexual maturity).

Because a melanistic animal’s offspring has an increased chance of being melanistic, under certain conditions entire populations of darker individuals may appear.

This phenomenon is known as adaptive melanism.

The most famous example of industrial melanism is that which affected the British population of the peppered moth (Biston betularia), a species of moth found throughout the northern hemisphere.

The peppered moth is naturally pale in color, but populations of dark-colored, melanistic peppered moths began to appear in industrial areas of Britain.

It was found that the pollution present in those industrial areas had caused trees to become darkened with soot. As a result, melanistic peppered moths were better camouflaged than pale individuals, and were less likely to be predated by birds.

With a lower chance of being predated, the melanistic moths were more likely to reproduce and pass on their melanistic genes to their offspring.

The populations of peppered moths in industrial areas became dominated by dark individuals, whereas their pale-winged counterparts dominated in unpolluted areas.

Industrial melanism has been used as direct proof of Darwin’s Theory of Evolution.

What Is The Difference Between A Moth And A Butterfly?

Pseudomelanism (also known as pseudo-melanism or abundism), is another genetic condition that causes increased production of melanin. It results in animals with darker, larger, or more prominent markings than usual, such as wider or darker stripes or spots.

The lack of pigment in an albino animal’s eye means that blood flowing in the blood vessels in the eye is visible, giving the eye a red color.

Leucism is a genetic condition that causes a partial lack of pigment in an animal. Leucistic animals may have white patches, or appear paler than other individuals.

A panther (also known as a “black panther”), is not a species such as a lion or cheetah. The name “panther” refers to either a leopard (Panthera pardus), or a jaguar (Panthera onca) that is melanistic.

Melanism is relatively common in cats, and the condition can give individuals an advantage in some situations. A panther living in a dense forest habitat may be better able to conceal itself from potential prey, for example.

You can find out more about big cats on this page: What Is A Big Cat

You can find out more about leopards on this page: Leopard Facts

You can find out more about jaguars on this page: Jaguar Facts

A silver fox often has normally-colored siblings, unless both of its parents were silver foxes, in which case the litter would usually consist entirely of silver foxes.

You can see every species of wild dog on this page: Wild Dogs List with Pictures & Facts

You can find out more about birds in this page: Birds: The Ultimate Guide

You can find out more about reptiles on this page: Reptiles: The Ultimate Guide

You can find out more about amphibians on this page: Amphibians: The Ultimate Guide

Discover more about the animal kingdom on the following pages:

Animals A to Z List with Pictures And Facts

Are Sharks Mammals? Is A Shark A Mammal Or A Fish?

Are Whales Mammals? And If So, Why? Amazing Whale Facts