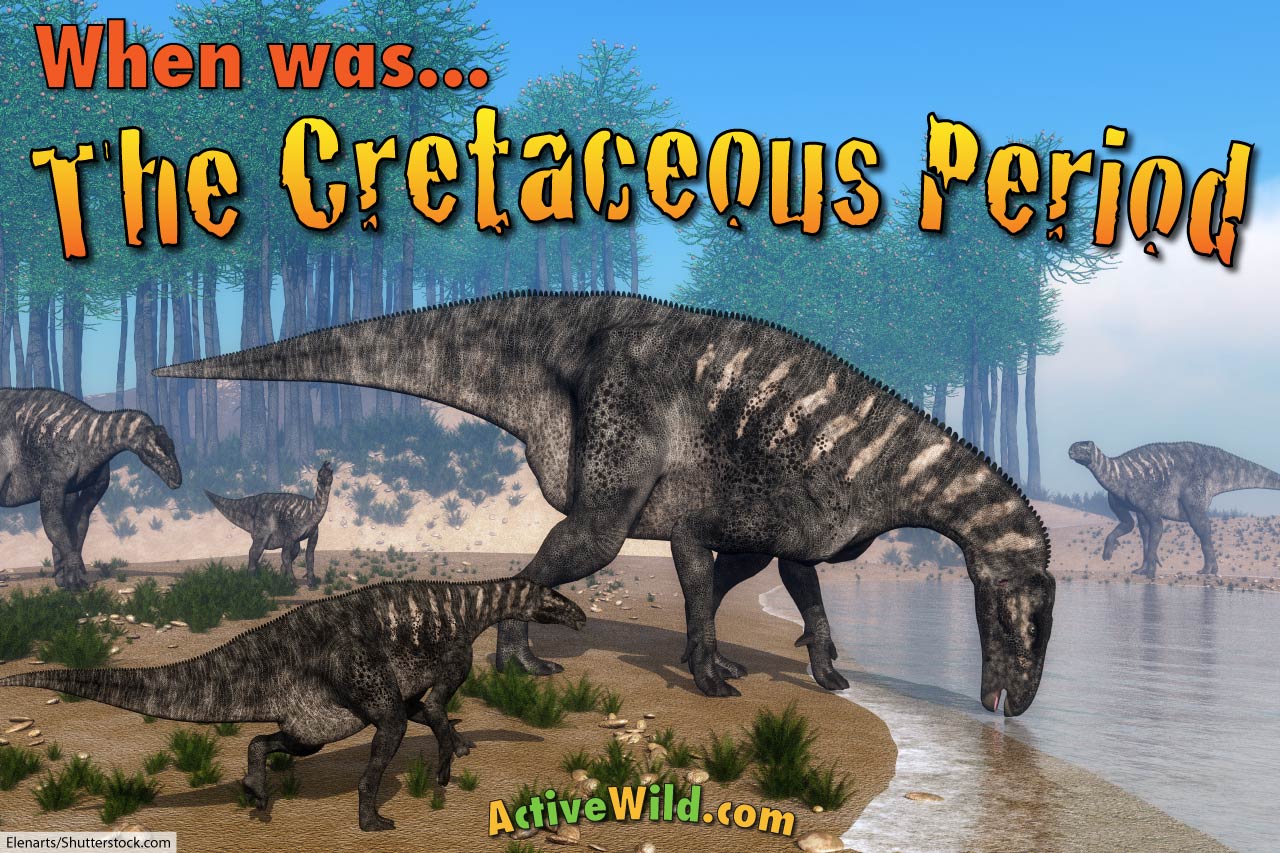 The first flowering plants appeared in the Cretaceous Period. They formed an evolutionary relationship with insects that allowed both groups to flourish.

It was during the Cretaceous period that dinosaurs were at their most diverse. Some of the most famous dinosaurs lived during this period, including the mighty Tyrannosaurus rex.

The huge landmass known as Pangea continued to break apart in the Cretaceous Period, and it was during this period that the modern continents were formed.

When Was The Cretaceous Period?

The Cretaceous Period began 145 million years ago (Mya) and ended 66 Mya. It was the third and final period of the Mesozoic Era.

When Were The Epochs of the Cretaceous Period?

Just as hours divide into minutes, eras divide into periods. Just like minutes, periods can themselves be divided into smaller units. These units are known as epochs.

Unlike minutes and hours (and seconds), geologic time periods (such as periods and eras) aren’t always the same length. This is because they correspond to layers of rocks in the Earth’s crust rather than set amounts of time.

The epochs of the Cretaceous Period are shown below:

How Long Did The Cretaceous Period Last?

The Cretaceous Period lasted 79 million years. It was the longest of the three periods of the Mesozoic Era.

What Came Before the Cretaceous Period?

The period that came before the Cretaceous Period was the Jurassic Period (the second period of the Mesozoic Era).

What Came After the Cretaceous Period?

The Cretaceous Period ended with a mass extinction event that killed off all of the large dinosaurs. (Only the dinosaurs that had evolved into birds escaped extinction.)

After the Cretaceous Period came the Paleogene Period. This was the first period of the Cenozoic Era.

We are currently living in the Quaternary Period – the third period of the Cenozoic Era. It began around 2.588 Mya.

Periods of the Mesozoic Era

Which Era is the Cretaceous Period Part Of?

As we’ve found, the Cretaceous Period is the third of three periods that make up the Mesozoic Era.

The first period of the Mesozoic Era was the Triassic Period. It began 251.9 million years ago (Mya) and ended 201.3 Mya.

The second period was the Jurassic Period, which spanned from 201.3 Mya to 145 Mya.

The Cretaceous Period is a period of time in the Geologic Time Scale. Like all periods in the Geologic time scale, it corresponds to the time in Earth’s history during which a certain layer of rock was being formed.

Both chalk and limestone are ‘sedimentary rocks’; that is, rocks formed by the gradual buildup of tiny grains of sediment carried in water.

The warm climate of the Cretaceous Period led to high sea levels. Large, shallow inland seas formed and were home to millions of microscopic organisms. When the organisms died, their bodies drifted to the sea bed, forming a deep layer of sediment.

The sediment eventually hardened and over the centuries became the chalk or limestone characteristic of the Cretaceous Period.

Because new rock layers form over older rock layers, the further down you dig, the older the rock will be. Any fossils you find in the upper layers are likely to be newer than those found in deeper layers.

The End Of The Cretaceous Period

The Cretaceous Period ended with an extinction event known as the Cretaceous-Paleogene Extinction Event. During this tumultuous time all of the non-avian dinosaurs, together with the pterosaurs, the plesiosaurs, ammonites, and countless other species, became extinct.

In fact, during the Cretaceous-Paleogene Extinction Event, around 75% of all species on Earth perished.

The most likely cause of the mass extinction is that Earth was hit by a large asteroid or comet. The subsequent explosion would have caused a dust cloud, blocking the sun and preventing plants from growing.

The effect of the asteroid impact may have been multiplied by widespread volcanic activity – a deadly combination that few species would have been able to survive.

The asteroid impact theory was backed up by the discovery of a large impact crater near the town of Chicxulub, on Mexico’s Yucatán Peninsula.